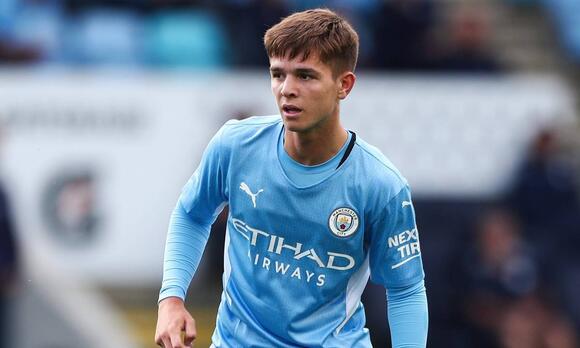 Despite already featuring heavily for the EDS so far this season - including scoring a hat-trick in his sides 4-2 demolition of Manchester United - McAtee is set for a more involved role in the first-team set-up.

Earlier this month, Pep Guardiola admitted that the midfielder, alongside Romeo Lavia, Liam Delap and Cole Palmer, will be training with the first team throughout this campaign.

Sam Lee has confirmed this in his most recent piece for the Athletic. He says McAtee was earmarked by Pep Guardiola as one of five players who will feature around the first team.

The club rejected several loans, and insiders talk about other benefits of being around the squad at that age.

This is something fellow academy graduate Phil Foden knows all too well.

Despite various cries for the star midfielder to go out on loan and gain valuable experience, Guardiola kept him around the squad and he's now reaping the rewards of training with world-class talent.

McAtee gave fans a taste of his talent in pre-season, providing a sublime assist for Samuel Edozie in a behind closed door friendly against Preston North End.

Reports have emerged that Rodgers would turn down advances from Newcastle United to be their next manager, owing to the Northern Irishman believing that he could be the man who replaces Pep Guardiola at Manchester City. Brendan Rodgers is one of the most highly regarded managers in the Premier League,...
PREMIER LEAGUE・11 DAYS AGO
CityXtra

After a positive but ultimately unsuccessful result against Paris Saint-Germain, it was important for Manchester City to bounce back and re-establish their place in Group A. Against Club Brugge, they did just that. With five goals and some thrilling individual displays, Pep Guardiola's team easily dispatched their Belgian opponents on...
PREMIER LEAGUE・4 DAYS AGO
CityXtra

The 19-year-old, who scored a hat-trick for Manchester City's EDS side on Saturday, came off the bench to score his first Champions League goal, as the Blues thrashed Club Brugge in Belgium. Manchester City have now scored 13 goals in three European matches this season, as Pep Guardiola's side bounced...
PREMIER LEAGUE・5 DAYS AGO
CityXtra

Guardiola joined City in 2016, following a trophy-laden three-year spell at Bayern Munich, and since arriving in the North-West of England, the Catalan has overseen the Sky Blues dominate the Premier League throughout his time in charge. Under the guidance of Pep Guardiola, Manchester City have won three Premier League...
PREMIER LEAGUE・11 DAYS AGO

Manchester City moved up to second in Group A after they thrashed Club Brugge 5-1 at the Jan Breydel Stadium in Belgium on Tuesday evening. After suffering a 2-0 loss to Paris Saint-Germain last month, Pep Guardiola's squad bounced back to winning ways with a superb victory against the Belgian Pro League side.
PREMIER LEAGUE・4 DAYS AGO
meaws.com

Sergio Aguero has played down any issues between him and his former Manchester City manager Pep Guardiola. Aguero left City in the summer after a hugely successful ten seasons that saw him become the club's all-time record goalscorer. City decided against renewing his contract, and Aguero was able to sign...
PREMIER LEAGUE・11 DAYS AGO
newschain

Pep Guardiola has expressed surprise at comments from Raheem Sterling that he would consider leaving Manchester City. The City manager, however, admits he could understand why players would want more game time. Sterling, whose contract at the Etihad Stadium expires at the end of next season, said this week he...
PREMIER LEAGUE・9 DAYS AGO
CityXtra

The 26-year-old has struggled to nail down a place in Pep Guardiola's starting XI since the latter stages of the previous campaign, which has put doubts over his future at the club. Sterling, who currently earns around £300,000-per-week at the Etihad Stadium, was linked with a move away in the...
PREMIER LEAGUE・7 DAYS AGO

The recent international break has caused a host of problems for Manchester City and other Premier League clubs. For the Etihad outfit, Ferran Torres has picked up a serious foot injury after playing through the Nations League final with pain injections. On top of that, Gabriel Jesus and Ederson both...
PREMIER LEAGUE・6 DAYS AGO
chatsports.com

'There's obviously been some bust-up!' Roy Keane believes 'something is going on' with Raheem Sterling and his Manchester City manager Pep Guardiola after the £100m signing of England team-mate Jack Grealish

Roy Keane believes there has been a bust-up between Raheem Sterling and his manager Pep Guardiola at Manchester City. England star Sterling, off the back of an impressive Euro 2020 with his country, has started just two of City's seven Premier League games so far this season. Despite his lack...
PREMIER LEAGUE・12 DAYS AGO
CityXtra

It's fair to say that the 26-year-old has had an up-and-down start to life at the Etihad Stadium. Since joining for £41 million in the summer of 2020, the defender - who can play as a left-back or on the left side of central defence - has started just 12 of a possible 46 Premier League games.
PREMIER LEAGUE・6 DAYS AGO
CityXtra

Rodri has shown inconsistent form in his first season as a Manchester City player. However, in the last 18 months, the Spaniard has shown he is fully capable of filling the boots of the soon to be departing Fernandinho in City's crucial holding midfield role. Most recently, Rodri superbly patrolled...
PREMIER LEAGUE・5 DAYS AGO

Charles De Ketelaere is one of the most exciting young talents in European football and owing to his impressive performances for the Belgian club across the previous 12 months, the 20-year-old is believed to be on the radar of many top clubs. The versatile midfielder is a key member of...
PREMIER LEAGUE・3 DAYS AGO
BBC

Manchester City boss Pep Guardiola speaking to Match of the Day: "After the international break it’s always a little bit difficult to come to a rhythm and I know how good Burnley are. "They did really well, they have good players and we played a good 15-20 minutes in the...
PREMIER LEAGUE・8 DAYS AGO
SPORTbible

Manchester United legend Roy Keane claims that Raheem Sterling has “obviously [had] some bust-up” with Manchester City manager Pep Guardiola. Sterling arrived at City in 2015 and has lifted three Premier League titles, four League Cups and an FA Cup during his time at the Etihad. The 26-year-old winger, who...
PREMIER LEAGUE・11 DAYS AGO
newschain

Pep Guardiola hailed Bernardo Silva as extraordinary after champions Manchester City claimed a hard-fought 2-0 win over Burnley on Saturday. Silva, who was linked with a move away in the summer, has been in fine form in the opening months of the season and again stood out in an otherwise disjointed City display at the Etihad Stadium.
PREMIER LEAGUE・8 DAYS AGO
CityXtra

Pep Guardiola's side are looking to regain some momentum in their Champions League pursuit this season, after falling to a 2-0 defeat at the hands of Paris Saint-Germain prior to the most recent international break. Goals from Idrissa Gueye and Lionel Messi stunned City, who were seen to have dominated...
PREMIER LEAGUE・6 DAYS AGO
chatsports.com

Pep Guardiola appears to have scored victory in his quest for five substitutions to be permitted in the remainder of the Carabao Cup. As Sportsmail revealed earlier this month, the Manchester City boss was instrumental in a campaign to increase the number of interchanges for the rest of the competition.
PREMIER LEAGUE・11 DAYS AGO
Tribal Football

Manchester City boss Pep Guardiola insists he's happy with John Stones. tones has missed out on selection in recent weeks as Pep Guardiola has preferred Ruben Dias and Aymeric Laporte at the heart of his Manchester City defence, but the manager says the England defender is "fighting hard". "Aymeric has...
PREMIER LEAGUE・10 DAYS AGO
ClutchPoints

Pep Guardiola sheds some light on the looming uncertainty regarding Manchester City winger Raheem Sterling. In England’s national team, Sterling boasts heavy minutes, often starting in every single marquee match. On the other hand, the winger’s minutes have recently diminished at City, opting for Guardiola to utilize other options on...
PREMIER LEAGUE・9 DAYS AGO