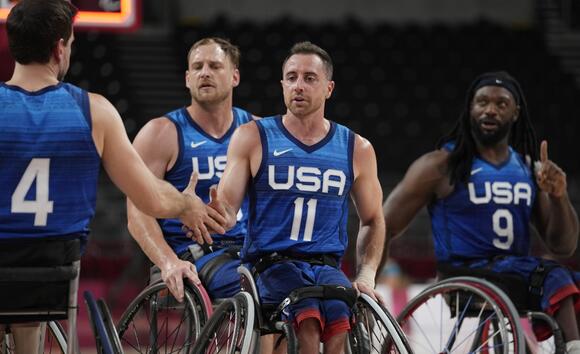 The U.S. team recovered after trailing by five points in the fourth quarter, pulling ahead just in time to beat the Japanese team in the Ariake Arena.

“Japan was the Cinderella story of this tournament, but you couldn’t ask for a more storybook ending for us,” Serio said. “We didn’t get the start we wanted, but we definitely got the finish we wanted.”

“This game just came down to heart,” Great Britain's Gaz Choudhry said of the match.

Britain's head coach, Haj Bhania, tested positive for COVID-19 before the team was set to go to Tokyo, forcing the team to compete without him.

Choudhry stepped up as the team's player-coach, leading the team to the medal victory.

HAMILTON (WKRC) - When Kendyl Roberts started with karate a decade ago, she probably didn’t anticipate being draped in gold medals. Her parents were just looking for something for her to do. Now, Roberts is a world champion. Representing the United States team, the 17-year-old Badin High School junior just...
HAMILTON, OH・14 DAYS AGO
kusi.com

SAN DIEGO (KUSI) – CAF athlete Justin Phongsavanh took home the bronze after the Tokyo Paralympics in Tokyo. Phongsavanh is paralyzed from the waist down, but didn’t let that stop him from becoming one of the best javelin throwers in the world. He discussed his latest accomplishment with KUSI’s Paul Rudy.
SAN DIEGO, CA・14 DAYS AGO
vermontjournal.com

Renishaw’s metal 3D printing technology was used to produce customised components for the Great Britain Cycling Team (GBCT) at the Tokyo 2020 Olympic Games. Riding on the HB.T bikes, GBCT won seven Olympic medals, with Laura Kenny CBE becoming the most successful British female Olympian of all time and Jason Kenny CBE becoming the most successful British Olympian ever. Laura won gold in the Madison event alongside Katie Archibald, as well as silver in the women’s team pursuit, while Jason won gold in the men’s keirin and silver in the men’s team sprint.
SPORTS・14 DAYS AGO
hngnews.com

When he was 11 years old, John Boie discovered what he wanted his future to hold. All that was left was to accomplish those goals. So Boie went to work. It took 19 years of effort—and, thanks to COVID-19’s impact on the 2020 Paralympic Games, a year of waiting—for Boie to transform from a kid attending his first youth wheelchair basketball camp at UW-Whitewater to a 30-year-old at the top of the medals stand at the Tokyo 2020 Paralympic Games.
MILTON, WI・13 DAYS AGO
MassLive.com

Marcel Hug won the men’s wheelchair race in the 2021 Boston Marathon on Monday. Hug of Switzerland completed the race in one hour, 18 minutes and 11 seconds. The Associated Press reported Hug made a wrong turn in the final mile. He finished just seven seconds off his course record, which was set in 2017.
BOSTON, MA・9 DAYS AGO
olympics.com

Jason Brown came from behind to seal a thrilling victory in figure skating's Finlandia Trophy, Friday (8 October), in Espoo, Finland. The American went into the free skate in second place overall, having been pipped to top spot in the short program by Canada's Keegan Messing in a tiebreak a day previously.
SPORTS・11 DAYS AGO

Roger Federer reached his peak in 2006 when he won 92 out of 97 matches and claimed 12 titles from massive 17 ATP finals! Nadal beat him in the final of Dubai, Monte Carlo, Rome and Roland Garros, while the only time he failed to reach the final was in Cincinnati, losing to a British teenager Andy Murray in straight sets.
TENNIS・12 DAYS AGO
theforumnewsgroup.com

After gold in Tokyo for 3 players, Mercury headed to WNBA Finals

PHOENIX — The Phoenix Mercury are on their way to the WNBA Finals after beating the Las Vegas Aces 87-84 in Game 5. Star center at 6'9", Brittney Griner led the team to a win in Friday night's game scoring 28 points in 38 minutes. This trip is extra special.
PHOENIX, AZ・11 DAYS AGO
NBC Chicago

After a tight race to the finish, Daniel Romanchuk has just defended his title in the men's wheelchair race at the Bank of America Chicago Marathon. Facing stiff competition, Romanchuk cruised to his third consecutive victory in the race with an official time of 1:29:07. Romanchuk seized his first Abbott...
CHICAGO, IL・10 DAYS AGO

CHARLOTTE, N.C. — A paralympic swimmer from North Carolina won two gold medals at the 2020 Tokyo Paralympic Games this past summer. It was an achievement she had dreamed of since childhood. What You Need To Know. Hannah Aspden won a gold medal in the 100-meter backstroke at the 2020...
CHARLOTTE, NC・7 DAYS AGO
olympics.com

After winning bronze at the National Open athletics meet last month, Haryana runner Ayush Dabas clinched the gold medal in the men’s sprint at National Open 400m Championships 2021 in Delhi on Tuesday. A national under-23 champion, Ayush Dabas clocked 46.86 seconds at the Jawaharlal Nehru Stadium to take the...
SPORTS・8 DAYS AGO
Telegraph

Sharron Davies could finally be awarded an Olympic gold medal from the 1980 Moscow Games after swimming’s governing body pledged to confront historic doping scandals. In a development that could also mean three retrospective Olympic medals for Ann Inge (nee Osgerby), swimming has agreed to form a new Aquatics Integrity Unit that will investigate past doping scandals, including the notorious East German regime during the 1970s and 1980s.
SWIMMING & SURFING・5 DAYS AGO
Fox 32 Chicago

Blackhawks' Kane and Jones named to 2022 US Olympic men's team

CHICAGO - Patrick Kane and Seth Jones will represent the Chicago Blackhawks on Team USA at the 2022 Winter Olympics. USA Hockey announced on Thursday that Kane and Jones will join Auston Matthews of the Toronto Maple Leafs as the first three players of the U.S. Olympic men's ice hockey team.
NHL・13 DAYS AGO
albuquerqueexpress.com

New Delhi [India], October 16 (ANI): A team from 4/5 Gorkha Rifles (Frontier Force) -- which represented the Indian Army at the prestigious Cambrian Patrol Exercise at Brecon, Wales, UK from October 13-15 -- has been awarded the gold medal. Exercise Cambrian Patrol organised by the UK Army is considered...
MILITARY・3 DAYS AGO