Helen Mirren looked stunning in a post she shared on social media. The actress appeared years younger as she danced with Vin Diesel and Meghan Thee Stallion at the Dolce & Gabbana fashion exhibit.

Helen Mirren got social media steaming with a post that showed her time at the Dolce & Gabbana show. The post featured the movie icon dancing with Vin Diesel and Meghan Thee Stallion.

The D&G Alta Moda fashion show in Italy had many top artists, including Jennifer Lopez, Doja Cat, Kris Jenner, Kourtney Kardashian, Travis Barker, and Normani. And Mirren, 76, had a lovely time swaying on the dance floor.

The star looked radiant in her gold corset as she twisted and turned on the dance floor with Diesel. The actress had some nice moves, and she surprised fans as she swept her "Fast and Furious" co-star off his feet.

At what appeared to be an after-party, Mirren didn't pull off her dancing shoes. She shared a dance with Meghan Thee Stallion, and they also shared a friendly embrace. 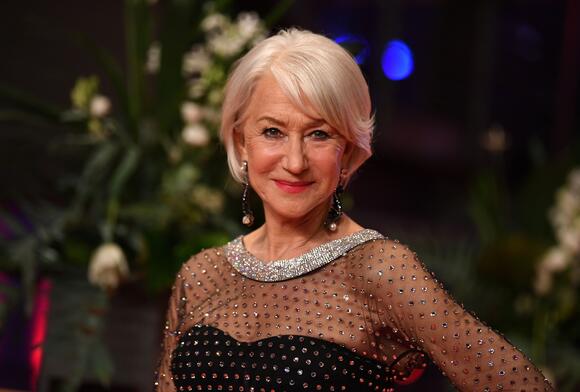 On Mirren's Instagram page, the iconic actress shared a snapshot that showed her dance with Diesel. Although the image only showed her back view, Mirren still looked elegant in her outfit. Her caption read, "I danced in the rain with VIN DIESEL!"

Her 973k followers received the image with lots of love as they had nothing but praise for the older actress. The picture posted two days ago has had over 201,896 likes and 2,559 comments.

A recent report about Mirren and Hackford revealed that they plan to sell their mansion in Hollywood for $18.5 million.

Also, a Twitter update featured "The Queen" actress and Meghan Thee Stallion in a gathering. Mirren wore a silver maxi dress and styled her beautiful hair in a back bun.

Megan Thee Stallion was spotted in a dark one-shoulder dress that fitted her figure perfectly. She also rocked straight, dark hair and stood beside Mirren as they appeared to have a cheerful conversation.

MIRREN'S APPEARANCE AT THE FASHION SHOW

At the Dolce & Gabbana fashion show in Venice, Italy, Mirren made a luxurious appearance. She looked breathtaking as she showed up in a boat in a stylish maxi outfit.

The "Red" actress rocked a gold corset with shiny olive and burgundy petals. Her hair was swept back, and she matched her outfit with a pair of gold earrings with a touch of some olive gem.

She wore a cream chiffon scarf around her shoulders, and her full skirt had classic art images printed on it. The award-winning actress wrapped her outfit all up with a gold clutch purse.

For Mirren, looking beautiful and putting on make-up is part of her everyday routine. Famous for her ageless looks, she doesn't only look glamorous on set.

During the COVID-19 pandemic, which kept all indoors, Mirren took some of her elegant looks home. In an interview, she noted that she always dressed up and looked good while staying home with her husband, Taylor Hackford.

However, the movie icon added that she loved looking good. She didn't dress up, put on her lipsticks and eyeshadow to impress her husband as it is something she enjoyed.

A recent report about Mirren and Hackford revealed that they plan to sell their mansion in Hollywood for $18.5 million. The couple has lived on the estate for 30 years, and this step might be a big one.

The mansion was built in 1911, and it had eight large bedrooms, 11 luxurious bathrooms, a separate guest house, an outside living room, a garage big enough to occupy five cars, and other benefits.

Vin Diesel and Dwayne "The Rock" Johnson started as friends, but things got complicated over the years. Johnson recently addressed the conflict and why he believes they are "philosophically" different. The first four installments of the "Fast and Furious" films made it one of Hollywood's most profitable and fun franchises,...
CELEBRITIES・4 DAYS AGO
Amomama

"Loki" star Wunmi Mosaku, who continues to bless the entertainment industry with her acting prowess, has confirmed she is unfazed by the pressure on women in Hollywood. She is comfortable with her look and flaunts it at every given opportunity. Nigerian-born British actress Wunmi Mosaku has been turning heads after...
BEAUTY & FASHION・6 DAYS AGO
Amomama

Bobby Driscoll was a child star who won an Oscar at 12 and eventually passed away alone in an abandoned house. Here are details about the life he lived. Bobby Driscoll had a great start in life, but somewhere along the line, he went off track, and according to his friend Billy Gray, it was a choice he made.
NEW YORK CITY, NY・1 DAY AGO
Amomama

Popular entertainer Diana Ross has proven she can be the best in everything she does, including motherhood. Let's meet the singer's well-raised children who are married and established in their careers. American singer Diana Ross is one of the most successful singers of the rock and roll era. She is...
RELATIONSHIPS・5 DAYS AGO

It was a Hot Girl Fall for concertgoers at the first weekend of ACL Fest 2021, where Megan Thee Stallion's set welcomed a surprise guest: Miley Cyrus. Miley rushed onto the stage to dance with Meg, and the pair shared a hug in front of the crowd. "Dreams DO come...
CELEBRITIES・14 DAYS AGO
Hello Magazine

Here’s further proof that Charlize Theron is only getting better with time. The stunning Oscar winner, 46, looked incredible as she turned heads in a preppy-chic ensemble so perfect for early fall - and we’re obsessed!. The Bombshell star looked radiant at the Veuve Clicquot Polo Classic in Pacific Palisades,...
CELEBRITIES・14 DAYS AGO
HollywoodLife

When Madonna hit the red carpet for the NYC premiere of her new concert film, her son was there to support her, and Rocco Ritchie was the spitting image of his famous father, Guy Ritchie. Rocco Ritchie was on hand Thursday (Sept. 23) to support his mother, Madonna, at the...
CELEBRITIES・23 DAYS AGO
HelloBeautiful

Marjorie Harvey has been our style goals during her birthday trip to Paris and we're loving her most recent look!
BEAUTY & FASHION・7 DAYS AGO

Dwayne ‘The Rock’ Johnson only agreed to appear in ‘The Fate of the Furious’ if he didn’t have to share scenes with Vin Diesel. The two stars have reportedly butted heads while working on the ‘Fast and the Furious’ franchise and the ‘Jungle Cruise’ actor has confirmed he did what he could do avoid any “drama” during the making of the 2017 film.
CELEBRITIES・5 DAYS AGO
Footwear News

Tiffany Haddish turned heads at “The Harder They Fall” movie premiere last night. The “Girls Trip” actress attended the red carpet ahead of the Netflix film premiere in Los Angeles on Wednesday night. For the event, Haddish modeled an Alexandre Vauthier olive green and crystal-embroidered minidress from the pre-fall ’20 collection. The dress features long sleeves, an asymmetrical hem and a high neckline. Haddish kept her accessories minimal but added silver sparkly jewelry to acccent the look. For her footwear, the actress decided on bronze-colored heels. Her shimmery shoes featured an open toe, as well as ankle and toe straps, with a...
LOS ANGELES, CA・3 DAYS AGO
Harper's Bazaar

L’Oréal ambassadors Cindy Bruna, Camila Cabello, Helen Mirren, Amber Heard, and more stars and models walk on the beauty-focused catwalk of Le Defile L’Oreal Paris 2021 Womenswear Spring/Summer 2022 show in Paris, France. The worldwide known brand is celebrating the 50th anniversary of the tagline “Because You’re Worth It.”. Besides...
DESIGNERS & COLLECTIONS・13 DAYS AGO
940wfaw.com

LINDSAY LOHAN LAUNCHES PODCAST: Lindsay Lohan is the latest star to launch a podcast. She is partnering with Red Arrow Studios‘ Studio71 on the pod, which will land this year or early next year. Lohan is set to “share her authentic voice” and listeners will get “a chance to experience a never-before-seen side” of the Parent Trap star. She is also set to star in a Netflix rom-com.
CELEBRITIES・13 DAYS AGO
Hello Magazine

Zendaya continued to prove she could easily have a career as a model as she struck a pose in the fiercest look - and fans are going wild over it. The Malcolm & Marie star, who has been on a roll for years with her stellar style thanks to celebrity stylist Law Roach, looked incredible as she slayed against a dreamy skyline in a metallic chain and oversized coin-covered Vivienne Westwood crop top paired with a checked skirt and nude pumps.
BEAUTY & FASHION・9 HOURS AGO
thezoereport.com

The Paris Fashion Week underway in the French capital found its rock queen on the catwalk of the fashion show-event Le Défilé L’Oréal Paris, where is it Helen Mirren, 76, donated one of the most beautiful beauty looks seen during French fashion week: a eye makeup extra dark with two thick black lines airbrushed in the lower eyelid, under the lower rim of the eye, and faded in comma up to the temples; a graphic “reverse” cat eye of punk-rock inspiration.
BEAUTY & FASHION・12 DAYS AGO
maryvilleforum.com

Helen Mirren loves the 'chaos' of the runway

Dame Helen Mirren loves the "chaos" of walking in fashion shows. The 76-year-old actress recently walked in L’Oreal Paris’ runway show at Paris Fashion Week, and she has admitted she loves how "fun" it is being involved in the manic preparations, and seeing it all coming together perfectly when the models "miraculously" walk the catwalk.
BEAUTY & FASHION・12 DAYS AGO
womansday.com

Dame Helen Mirren, 76, revealed her health, wellness, and beauty secrets in a new interview with Vogue. The actress says her she stays fit thanks to her favorite exercise—a 12-minute workout. Mirren encourages confidence, mindfulness, and treating your body well for overall health. There's no denying that Helen Mirren just...
CELEBRITIES・8 DAYS AGO