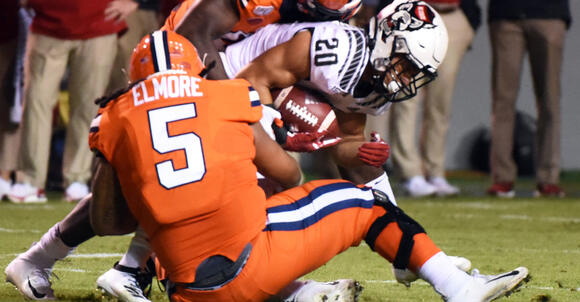 Syracuse will be without Chris Elmore for the season opener, as first reported by Matt Park. In addition, Park reported that Ohio will be without its top returning receiver Isiah Cox. Details on Elmore's situation were not immediately available, but he was seen on the field with his teammates during warmups in casual attire. Teammates were in helmets, t-shirts and football pants.

It is not all bad news on the injury front for Syracuse. Defensive tackle McKinley Williams was dressed and available. Offensive lineman Dakota Davis was as well. Whether each plays remains to be seen, as each was limited during different parts of training camp. Williams missed all of training camp, in fact.

The loss of Elmore is a big one for Syracuse. He is a versatile player who has spent time at defensive line, fullback, tight end and offensive line during his Orange career. He was named the starting tight end when the depth chart was released earlier in the week.

Without Elmore, it could mean more Maximilian Mang as a blocking h-back type while Luke Benson could see more time as well. Benson, however, was expected to be the primary receiving option at tight end regardless of Elmore's status.

The availability of Williams is significant for the Syracuse defense. Ohio is a physical, power running team. Having on its key cogs in the middle of the defensive line will only help the Orange.

Davis being available provides key depth for the offensive line. Darius Tisdale was listed as the starter on the depth chart, though.

Class of 2024 Millville (NJ) High quarterback Jacob Zamot is one of the more intriguing prospects in the Northeast. He is on the radar of several power five schools and spent Friday at Syracuse in order to watch the Orange face Virginia.  "The game was awesome and the Dome was electric," Zamot ...
SYRACUSE, NY・4 HOURS AGO
AllSyracue

How to Watch Syracuse vs Wagner

Syracuse football is set to host FCS Wagner on Saturday in the JMA Wireless Dome. Here are five things to know about the Seahawks entering the matchup.  1. Defensive Issues In three games to date, Wagner has given up at least 370 yards of total offense and 27 points in each. In fact, the ...
STATEN ISLAND, NY・1 DAY AGO
AllSyracue

Bleav in Syracuse Episode 47: What Virginia Win Means for the Orange

Bleav in Syracuse podcast episode 47, presented by Bet Online and Hofmann Sausage Company, is out! Syracuse has started 4-0 after beating Virginia 22-20 Friday night in the JMA Wireless Dome. However, it was not the Orange's sharpest performance. We break down the win and what it means moving ...
SYRACUSE, NY・2 DAYS AGO

Anwar Sparrow: When You Stay Ready You Don’t Have To Get Ready

Many players prepare months on end for the opportunity to play on the football field. This preparation and hard work finally paid off for one player in particular: Anwar Sparrow. After appearing in three games last year primarily on special teams, Sparrow, the redshirt freshman from Virginia, got ...
SYRACUSE, NY・9 HOURS AGO