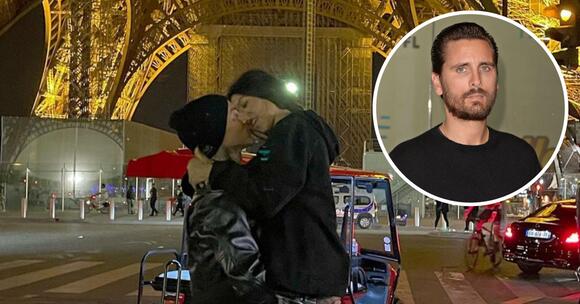 Unbothered? Travis Barker gushed that he’ll be with girlfriend Kourtney Kardashian “forever” while sharing more intimate photos from their Paris trip amid drama with her ex Scott Disick.

“Forever isn’t long enough,” the Blink-182 drummer, 45, wrote via Instagram on Friday, September 3. He shared three photos of himself and Kourtney, 42, packing on the PDA in front of the Eiffel Tower and another snapshot of them making out on a merry-go-round. The Poosh founder responded to the sweet post with five pleading face emojis.

Travis and Kourtney recently returned from a romantic trip around Europe. The pair spent time in Italy, where they attended the Dolce & Gabbana fashion show, and jetted off to Paris for a couple of days before returning to their home state of California on September 1.

However, they encountered a bit of drama on their trip after Kourtney’s ex Younes Bendjima leaked an alleged message from Scott, 38, shading the Keeping Up With the Kardashians star.

“Yo is this chick OK?!!! Broooo like what is this. In the middle of Italy,” Scott allegedly wrote to the male model, 28, along with a photo of Kourtney straddling Travis on a boat. The Flip It Like Disick alum and reality TV star share three children — Mason, Penelope and Reign.

“Doesn’t matter to me as long as she’s happy. P.S. I ain’t your bro,” the French athlete, who Kourtney dated from 2016 to 2018, responded. The screenshot showed Scott and Younes do not follow each other on Instagram.

“Keep the same energy you had about me publicly, privately,” Younes captioned the bombshell screenshot.

Scott and Kourtney have remained close coparents and friends since their split in 2015 after nearly a decade together. However, an insider revealed to Life & Style on September 2 things have been icy between the duo amid her relationship with Travis. Scott is currently dating girlfriend Amelia Gray Hamlin.

“Scott and Kourtney are friendly in front of the kids and at family gatherings, but behind closed doors, they’ve been secretly clashing for a while and barely talk,” the insider explained. “The arguing started shortly after Kourt and Travis began dating, and she’s accusing Scott of being jealous that she’s moved on and found love.”

Keep scrolling to see photos of Travis and Kourtney’s romantic time in Paris!

A wonderful surprise! Kourtney Kardashian is “over the moon” about her engagement to Travis Barker, a source tells In Touch. “She had an idea he was going to propose soon but wasn’t expecting it to happen this weekend.”. According to the insider, the Blink-182 drummer “planned the engagement in advance.”...
CELEBRITIES・2 DAYS AGO
shefinds

Amelia Hamlin Just Opened Up About Her Split From Scott Disick--And She Did Not Hold Back!

Amelia Hamlin and Scott Disick may have just called off their nearly year-long romance earlier this month, but the 20-year-old model is already opening up about the split on social media. The breakup came after Disick was embroiled in controversy after making nasty comments about his ex, Kourtney Kardashian, and her new beau Travis Barker engaging in PDA around Italy when he slid into another Kardashian ex, Younes Bendjima’s DM’s. However, while the split was reportedly not caused by this incident, Hamlin was said to be the one that called for the ending of their relationship, and is now speaking her mind.
CELEBRITIES・23 DAYS AGO
HollywoodLife

By the looks of Shanna Moakler’s Instagram Stories, she doesn’t seem too pleased that Kourtney Kardashian is now engaged to her ex-husband, Travis Barker. Travis Barker and Kourtney Kardashian got engaged on Sunday, October 17, and just a day later, Travis’ ex-wife, Shanna Moakler, seemingly reacted to the proposal news with cryptic messages on her Instagram Stories. Shanna, who has doled out some shade to “Kravis” before, started off her posts with a quote from the late Tupac Shakur, which read, “Before you ask why someone hates you, ask yourself why you give a f**k.” She also added a heart emoji above the quote.
CELEBRITIES・2 DAYS AGO
New York Post

A day after Kanye West listed one of his Wyoming ranches, he also said goodbye to the Hidden Hills home he had shared with Kim Kardashian. New documents filed in the Los Angeles County Court Tuesday show that Kim will get the $60 million house they’d built together. Sources told...
TROUBLE RELATIONSHIP・7 DAYS AGO

Rob Kardashian just made a rare appearance on Instagram!. On Monday, his sister Kim Kardashian shared a few photos from a family dinner that included Rob, who looked happy and healthy. The first pic featured Kourtney Kardashian with her beau Travis Barker, and the second showed siblings Khloé Kardashian and...
CELEBRITIES・15 DAYS AGO
Radar Online.com

Scott Disick is being dragged to federal court for allegedly ripping off other artists' work without paying them a dime. According to court documents obtained by Radar, the reality star and is company Talentless are being sued by a famed L.A. photo agency. Article continues below advertisement. In the federal...
CELEBRITIES・14 DAYS AGO
shefinds

Khloe Kardashian’s beauty transformation has been well documented across the internet, and the reality star and ‘Good American’ owner only continues to evolve as she posted an ad video to Instagram looking different than usual early this week. The new look comes after it was alleged that Kardashian was not in attendance at the Met Gala for reportedly being “too C-list,” although many of her family members were there.
CELEBRITIES・18 DAYS AGO
E! News

Watch: Rob Kardashian Makes Rare Appearance After Instagram Outage. Kim Kardashian just cleansed the timeline. After Facebook and Instagram experienced a massive outage for nearly six hours, the Keeping Up With the Kardashians star made a glorious return to the 'gram with a rare new photo of her brother, Rob Kardashian.
CELEBRITIES・15 DAYS AGO

Chase Chrisley revealed a BIG secret regarding the Kardashian family on his Instagram Stories a while back. Turns out, he wants a hot and steamy Kardashian romance. More specifically, it appears as if he wants to pick up Kourtney Kardashian and plant a big, wet smooth on her!. Wait, he...
CELEBRITIES・8 DAYS AGO
ETOnline.com

Beyoncé and JAY-Z are living La Vita Bella in Italy. The couple has been enjoying a luxurious vacation in the European country and on Tuesday, Bey took to Instagram to share some photos her husband took of her while out in Venice. In the pics, the 40-year-old singer is wearing...
CELEBRITIES・21 HOURS AGO
Bossip

Scott and Kourtney's on-again, off-again relationship began in 2006. They dated for more than 10 years, during which time they welcomed three children: Mason, Penelope and Reign.
CELEBRITIES・1 DAY AGO
Life and Style Weekly

When it comes to celebrities who love Halloween, the members of the Kardashian-Jenner family pretty much top the ~spooky~ list. In fact, Kourtney Kardashian started decorating for Halloween 2021 over a month early. ‘Tis the season, right?. In September, the Poosh.com founder, 42, took to Instagram to share photos of...
CELEBRITIES・11 DAYS AGO

Scott Disick ‘Avoids’ Family Events Because of Travis Barker: He ‘Feels Like an Outcast’

A family divided. Scott Disick‘s disconnection from the Kardashian-Jenners doesn’t seem to be getting any better in the wake of Kourtney Kardashian‘s engagement to Travis Barker. “The Kardashians adore Scott and tell him he’s part of the family no matter what, but he feels very distant and feels like an...
FAMILY RELATIONSHIPS・8 HOURS AGO
Life and Style Weekly

Celebrating in style! Kim Kardashian and her famous family attended the Saturday Night Live afterparty in the wee hours of Sunday, October 10, in New York City. The former Keeping Up With the Kardashians star, 40, looked incredible in a curve-hugging Balenciaga bodysuit with feathered sleeves. Kim’s sister Khloé Kardashian was also in attendance wearing a red dress, jacket and face mask paired with Nike sneakers.
CELEBRITIES・9 DAYS AGO
Life and Style Weekly

Spooky season! Kylie Jenner hosted a Nightmare on Elm Street launch party with her family for her new Kylie Cosmetics collection after receiving backlash for the graphic marketing, which included the reality starlet naked while covered in fake blood. “When Kylie says we’re doing a small little dinner, this is...
CELEBRITIES・8 DAYS AGO
Bossip

Kourtney Kardashian & Travis Barker Are Engaged! See The Massive Ring He Popped The Question With

The romantic proposal went down on Sunday, October 17, when the Blink 182 drummer set up a big arrangement of flowers on a beach in Souther California.
CELEBRITIES・2 DAYS AGO

Travis Barker‘s children Alabama Barker and Landon Barker are celebrating the news of their dad’s engagement to Kourtney Kardashian on Sunday, October 17, in a big way. Taking to her Instagram Stories, Alabama, 15, shared a photo of Kourtney, 41, sporting her engagement ring that her dad, 45, gave her, writing, “So happy for you guys,” before adding, “I love [you] both.”
ALABAMA STATE・2 DAYS AGO
Life and Style Weekly

Families who get spooky together, stay together! Kourtney Kardashian and boyfriend Travis Barker enjoyed a date at Nights of the Jack in Calabasas, California, on Sunday, October 11. The Poosh.com founder brought her daughter, Penelope Disick, while the Blink-182 drummer brought his daughter, Alabama Barker. The sweet foursome appeared to...
ALABAMA STATE・9 DAYS AGO
Life and Style Weekly

The couple that slays together, stays together! Kourtney Kardashian and her boyfriend, Travis Barker, held hands while stepping out in coordinating outfits during their weekend getaway in New York City. Kourtney, 42, wore a black leather mini dress with a chain belt, black knee-high boots and a beige trench coat....
NEW YORK CITY, NY・3 DAYS AGO
Life and Style Weekly

Welcome to the Fam! The Kardashian-Jenners React to Kourtney and Travis Barker’s Engagement News

Cheers to the happy couple! The Kardashian-Jenner family, including Kim Kardashian and Kylie Jenner, were thrilled by the news that sister Kourtney Kardashian and boyfriend Travis Barker got engaged. The Blink-182 drummer, 45, proposed to the Poosh.com founder, 42, on Sunday, October 17. “Forever,” Kourtney captioned the pair’s announcement via...
CELEBRITIES・2 DAYS AGO