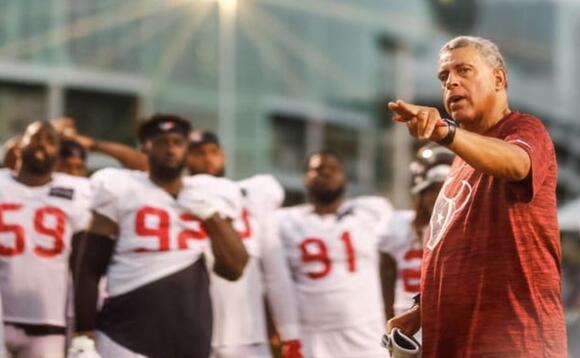 Nobody likes working under the cloud of an uncertain future. Well, nobody except Houston Texans head coach David Culley.

Despite the fact that half the players on Houston's current roster are on one-year deals with 30 set to hit free agency in 2022, Culley seems less than concerned.

"When I am coaching out on the field, I don’t really know if he's got a one-year or a five-year," Culley said. "We coach them up as if they are going to be with us, we coach them up for now and not for later and that’s how I approach it. For the most part, I have no idea if he’s got a one-year or three-year contract, I know he is here, he is a part of us and I am going to coach him till he isn’t here."

Given that this roster is the second-oldest on average in the NFL today, a high turnover rate is to be expected again next season, as was the case this year.

This team is clearly in rebuilding mode. Essentially, 2021 is for evaluating what they have now and who they'd like to retain in the long-term before they head into next year's draft with a full haul of draft picks, that is potentially set to increase if Deshaun Watson is traded.

As such, Culley's 'live in the moment' approach is wise and should help him get the best out of every player on the roster now, rather than making lineup decisions based on future potential.

HOUSTON -- The Houston Texans are all about "meat-and-potatoes'' moves ... and those are ongoing. ... Updated by the minute, our Texans Tracker will keep you up to date with everything happening at NRG Stadium. OCT 24 BENCHED The Houston Texans saw enough out of third-year offensive guard Max Scharping...
NFL・1 DAY AGO
USA TODAY Sports Media Group

The Houston Texans will finally have to face the music for their huge personnel decisions on Sunday when they play the Arizona Cardinals at State Farm Stadium. Three-time All-Pro receiver DeAndre Hopkins and three-time NFL Defensive Player of the Year J.J. Watt each left the organization in successive offseasons. Then-coach and general manager Bill O’Brien dealt Hopkins in March 2020 at the start of free agency, and the Texans this season released Watt ahead of free agency 2021.
NFL・5 DAYS AGO
TexansDaily

HOUSTON -- Antony Auclair twisted his body after recognizing a crack in the New England Patriots’ defense, capitalizing on the opportunity to slip past safety Kyle Dugger. The adjustment worked perfectly last Sunday as the Houston Texans’ 6-foot-6, 256-pound blocking tight end made a nifty catch for an 11-yard touchdown catch on a pass from rookie quarterback Davis Mills in the 25-22 loss to the Patriots. It represented the first score for Auclair since catching a touchdown in the Canadian national championship game, the Vanier Cup, five years ago for the Université de Laval’s Rouge et Or football team.
NFL・13 DAYS AGO
TexansDaily

HOUSTON - When Tyrod Taylor fully recovers from a Grade 2 strained hamstring, the Houston Texans' veteran quarterback will regain his starting job. Texans' coach David Culley emphasized Wednesday that Taylor, who remains on injured reserve and will not be activated this week for Sunday's game against the Indianapolis Colts as rookie Davis Mills will start his fourth consecutive game, will retain his QB1 status when healthy.
NFL・13 DAYS AGO

HOUSTON — During the Houston Texans’ 31-21 loss to the Cleveland Browns, Tyrod Taylor sustained a Grade 2 hamstring strain — which has sidelined him for three consecutive games. Ahead of the Texans’ Week 6 match against the 1-4 Indianapolis Colts on Sunday, Taylor is eligible to return to the...
NFL・13 DAYS AGO
TexansDaily

HOUSTON -- The Houston Texans are all about "meat-and-potatoes'' moves ... and those are ongoing. ... Updated by the minute, our Texans Tracker will keep you up to date with everything happening at NRG Stadium. OCT 11: TEXANS SIGN O-LINEMAN The Houston Texans signed center-guard Cole Toner to their practice...
NFL・14 DAYS AGO
TexansDaily

HOUSTON -- Houston Texans' Pro Bowl offensive left tackle Laremy Tunsil will undergo surgery Thursday to repair a torn ulnar collateral ligament in his left thumb. Tunsil is expected to be placed on injured reserve and miss approximately one month. The 1-4 Texans and their struggling kicker face the Indianapolis Colts Sunday at Noon. They then face the Cardinals, Rams and Dolphins before their bye week Nov. 14.
NFL・13 DAYS AGO

Race to Two Wins: How to Watch Texans vs. Colts

The 1-4 Indianapolis Colts will face off against the 1-4 Houston Texans on Sunday at Lucas Oil Stadium in Indianapolis. Both teams are striving for their second win of the season and have had some brutal losses in 2021. The Colts' season has been capped off by their Week 5...
NFL・10 DAYS AGO
TexansDaily

HOUSTON - Dramatic changes have hit the Houston Texans’ offensive line during the past week involving an overhaul of both starting tackles. Already mired in a four-game losing streak, the Texans lost Pro Bowl left offensive tackle Laremy Tunsil to a torn thumb ligament that requires surgery Thursday and will eventually prompt the team to place him on injured reserve. Less than a week ago, the Texans placed veteran right tackle Marcus Cannon on injured reserve.
NFL・12 DAYS AGO
Houston Chronicle

Now, on to the Texans, who play at Indianapolis on Sunday. I’m curious. Why do so many of you want the Texans to win four or five games and ruin their chances at a high first-round pick? You saw what happened to the Astros and Rockets after they bottomed out, but you have a problem with the Texans doing it?
NFL・11 DAYS AGO
TexansDaily

How One Play Was Game-Changer in Colts Over Texans

Football games can be decided by one play at time. OK, so the Houston Texans' 31-3 loss to the Indianapolis Colts on Sunday in NFL Week 6 was decided well before the whistle blew, but one play did dictate the momentum swing. Down 10-3 at the start of the third...
NFL・8 DAYS AGO
TexansDaily

Sources: Texans' Marcus Cannon Back Surgery, Out for Season

INDIANAPOLIS -- Houston Texans' veteran offensive tackle Marcus Cannon underwent season-ending back surgery to repair a herniated disk that was causing sciatica symptoms, according to league sources not authorized to speak publicly. Cannon was placed on injured reserve a week ago and won't play again this year as his recovery...
NFL・9 DAYS AGO
TexansDaily

INDIANAPOLIS - The Houston Texans' revolving door at safety spun again Sunday afternoon against the Indianapolis Colts. Terrence Brooks replaced Lonnie Johnson Jr., in the starting lineup after he intercepted the first two passes of his career in consecutive games against the New England Patriots and Buffalo Bills. However, the...
NFL・8 DAYS AGO
TexansDaily

The Houston Texans' run game may be struggling this year, but in all fairness, their offense hasn’t had it easy. This off-season saw a huge turnover in playing staff, resulting in just five starters returning from last year's unit. If you’re wanting to be ‘glass half full’ about it all then, yes, they brought in some talented players, upgraded certain positions, and added depth where necessary.
10 DAYS AGO
TexansDaily

HOUSTON -- The Houston Texans are all about "meat-and-potatoes'' moves ... and those are ongoing. ... Updated by the minute, our Texans Tracker will keep you up to date with everything happening at NRG Stadium. OCT 17: WHO’S IN AT INDY? Today’s Texans inactives: Deshaun Watson, Brevin Jordan, Danny Amendola,...
NFL・9 DAYS AGO
TexansDaily

HOUSTON -- Houston Texans' veteran quarterback Tyrod Taylor, a starter who remains on injured reserve, is making steady progress and coach David Culley expressed some optimism about his eventual return and said his hamstring will be evaluated again this week. Culley was noncommittal, though, on when Taylor will be designated...
NFL・8 DAYS AGO
TexansDaily

The Houston Texans and the Indianapolis Colts entered Sunday's NFL Week 6 sporting the same cruddy 1-4 record. But as evidenced by the final score - Colts Texans - maybe the similarities end right there. Both clubs came in three games under .500 and two games behind Tennessee Titans in...
NFL・8 DAYS AGO
TexansDaily

HOUSTON -- Former Houston Texans veteran pass rusher Whitney Mercilus is joining the Green Bay Packers, according to league sources not authorized to speak publicly. The Kansas City Chiefs were among Mercilus' suitors, according to sources. Mercilus, 31, who has 57 career sacks and was released by the Texans on...
NFL・5 DAYS AGO