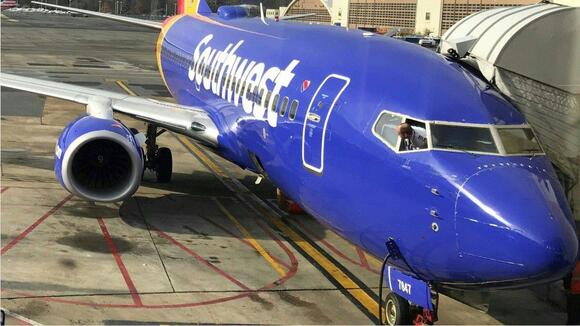 SAN DIEGO — A California woman, who was not wearing a seatbelt or mask properly, punched out an attendant’s teeth and pulled her hair during a flight, investigators said.

Vyvianna M. Quinonez attacked a Southwest Airlines attendant, knocking out two teeth and inflicting other injuries to the woman’s face, during a May 23 flight from Sacramento to San Diego. The attack happened after she was asked to fasten her seatbelt, stow her tray table and properly wear her mask, prosecutors said.

The flight attendant received four stitches, her left eye was bruised and swollen and her right arm was bruised.

Quinonez said she acted in self-defense, investigators said. Her attorney did not comment.

Watch the video of the assault below. Viewer discretion advised.

Quinonez was charged in federal court Wednesday with interfering with a flight crew. She will appear in court in San Diego Sept. 17. She also faces charges in state court.

The incident is part of an increase in unruly behavior by passengers on aircraft. The FAA has recorded 3,889 cases of unruly passengers, with 2,867 incidents this year because of disputes over wearing a mask. The agency has fined passengers more than $1 million. Typically, the FAA might have 100 to 150 bad passenger cases in a year, NBC News reported. The president of the flight attendant’s union has asked for more air marshals on planes.

people have lost respect for others... her job is to make everyone safe on the flight. the combative assailant needs to be taught some serious lessons on respect. respect those who are just doing their job.

Just think for a second ! what if that was your mother? How would you feel? Hey Ma! how was your day today? I got this bad migraine, a bloody nose and ten thousand dollars worth of dental damage. This crimal will be out on bail this same day and will be punished with community service.

Gee, you don't get sentenced to 20 years for self defense. I'd have knocked that nut so far out Google wouldn't be able to find her.

Sinclair Broadcast Group, which operates dozens of TV stations across the U.S., said Monday that some of its servers and work stations were encrypted with ransomware and that some of its data was stolen from the company's network. The company said it started investigating the potential security incident on Saturday...
PUBLIC SAFETY・1 HOUR AGO
Boston 25 News WFXT

2 people, including mother, arrested in connection to disappearance of NH 5-year-old boy

BRONX — Two people, including the mother, were arrested in connection to the disappearance of a 5-year-old boy from New Hampshire. Attorney General John M. Formella, New Hampshire State Police, and Merrimack Police told Boston 25 News Monday afternoon that 5-year-old Elijah Lewis’s mother, Danielle Denise Dauphinais, 35, was arrested, along with Joseph Stapf, 30, in the Bronx, New York, on Sunday. Warrants were issued in this investigation in New Hampshire for both Dauphinais and Stapf before their arrests.
BRONX, NY・3 HOURS AGO
Boston 25 News WFXT

HAMPTON, S.C. — Warrants released on Saturday detail how South Carolina attorney Alex Murdaugh “coordinated” a death settlement for the family of his housekeeper and kept more than $3 million for himself. Murdaugh, 53, of Hampton, is accused of misappropriating funds stemming from the death of Gloria Harriott Satterfield, the...
HAMPTON COUNTY, SC・36 MINUTES AGO
Boston 25 News WFXT

In a reversal of information, police in Norway now say that the man who killed five people in Norway last week used “stabbing weapons,” not a bow and arrows as police initially told media outlets. Police inspector Per Thomas Omholt made the revelation during a news conference Monday, nearly a...
PUBLIC SAFETY・2 HOURS AGO

DC suspends most of its Metro trains over safety issue

WASHINGTON — (AP) — Washington's regional Metro system abruptly pulled more than half its fleet of trains from service early Monday morning over a lingering problem with the wheels and axles that caused a dramatic derailing last week. The ruling promises to complicate daily travel and commutes for thousands of riders for an unspecified length of time while the National Transportation and Safety Board investigates the issue.
WASHINGTON, DC・2 HOURS AGO
Boston 25 News WFXT

CHICAGO — (AP) — A former Chicago college student was convicted Monday of attempting to provide material support to the Islamic State group. Thomas Osadzinski, 22, designed a computer code to help IS bypass programs designed to block the group's propaganda, prosecutors said. The former DePaul University student, who was born in a Chicago suburb, was living in the city when he was arrested in 2019 during an FBI sting. He faces up to 20 years in prison.
CHICAGO, IL・1 HOUR AGO
Boston 25 News WFXT

HELSINKI — (AP) — Norwegian police say the Danish man suspected of killing five people and injuring three others in an attack last week also used “stabbing weapons" along with a bow and arrow to kill his victims. Police inspector Per Thomas Omholt said it was likely the 37-year-old suspect,...
PUBLIC SAFETY・4 HOURS AGO
Boston 25 News WFXT

BOSTON — Hundreds of nurses and other Massachusetts General, Brigham workers stand to lose jobs in the coming weeks after refusing to get their vaccinations against COVID-19, something the hospital mandated back in June for all employees. The vaccine mandate did allow workers to apply for religious exemptions. But two...
BOSTON, MA・10 HOURS AGO

Jury selection to start in trial over Ahmaud Arbery's death

BRUNSWICK, Ga. — (AP) — Hundreds of people were ordered to report for jury duty Monday in Georgia for what could be a long, laborious effort to find jurors to hear the trial of three white men charged with fatally shooting Ahmaud Arbery as he was running in their neighborhood.
BRUNSWICK, GA・14 HOURS AGO
Boston 25 News WFXT

DETROIT — (AP) — Toyota plans to build a new $1.29 billion factory in the U.S. to manufacture batteries for gas-electric hybrid and fully electric vehicles. The move comes amid a flurry of global announcements about shoring up production of batteries for electric vehicles. Most automakers are working to transition away from internal combustion engines to zero emission battery vehicles.
BUSINESS・7 HOURS AGO