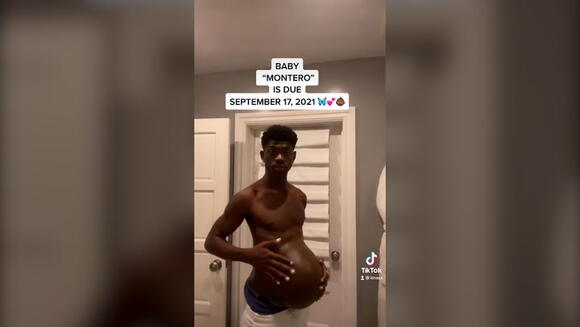 Lil Nas X has announced the release date for his new album Montero with a pregnancy photo shoot, calling it his “baby”.

The 22-year-old rapper, who released the song “Montero (Call Me By Your Name)” in March, told People that he’s releasing his new project on 17 September.

In the photoshoot, Nas X is seen dressed in a white satin robe with a flower crown and a baby bump.

“SURPRISE!” he captioned the image. “I can’t believe I’m finally announcing this. My little bundle of joy Montero is due 17 September 2021.”

The “Industry Baby” singer revealed that he came up with the idea of a pregnancy photoshoot after listening to Megan Thee Stallion‘s verse on his new song “Dolla Sign Slime” for the first time.

“I was like, ‘You know what? That’s actually brilliant,’” he added.

Lil Nas X also shared that the process of creating his new music has changed plenty of things in his life.

“I’ve changed in so many ways,” he said. “I’ve changed the way that I handle a lot of situations, the way I manage my sadness and anger and just understanding that I don’t have to react to emotions in certain ways. I can’t choose how I feel, but I can choose how to react. I’ve learned to let people’s comments roll off my back.”

Fans praised the “Old Town Road” rapper for the announcement, with Radio One editor Brandon Caldwell writing: “Every day Lil Nas x comes around to troll his a** off, create havoc and release good a** pop music and hey - he’s steadily winning.”

He can be gay all he wants, but this…this is over the top…a man that pretends to be pregnant says a lot his mental health 🤯🤯🤯

Lil Nas X has scored his third number-one hit with a song that's all about how he isn't a "one-hit wonder." After 12 weeks on the chart, "Industry Baby," featuring Jack Harlow, has finally reached the top of the Billboard Hot 100. According to Billboard, what did the trick was the fact that there were two new versions of the song went on sale earlier this month, and all three versions were discounted to 69 cents.
MUSIC・8 DAYS AGO
wjpitch.com

Lil Nas X had a meteoric rise to fame when his breakout song “Old Town Road” went viral at the beginning of 2019. From there he released a debut mixtape, continued to release hit songs and dropped his debut album in 2021. Lil Nas X also came out in 2019, sparking debate in the music community about manhood and self-confidence.
MUSIC・11 DAYS AGO
KXLY

Lil Nas X has hailed Doja Cat as his “biggest inspiration”. The 22-year-old star has taken to Twitter to heap praise on the ‘Juicy’ hitmaker, admitting that he’s been inspired by her career success and also described Doja as “hot”. Nas – who recently released his long-awaited debut album, ‘Montero’...
CELEBRITIES・12 DAYS AGO
Variety

How Are the 2022 Grammys Shaping Up for Lil Nas X?

After a busy year that not only saw him release a blockbuster album but also redefine what it means to be an LGBTQ pop star — and appear on the cover of Variety — Lil Nas X is primed to be a top Grammy contender. The 22-year old rapper, already a six-time nominee and two-time winner, paved the way for his long-awaited debut album, “Montero,” with a wave of masterfully orchestrated viral moments. If there were a trophy for most savvy internet user, Nas would be a shoo-in. The album reveals the man behind the memes — opening up about self-acceptance,...
MUSIC・5 DAYS AGO

Grammy voters have until Nov. 5 to make their choices. Even before first-round voting for the 64th annual Grammy Awards opened on Friday (Oct. 22), we knew that some albums wouldn’t be in the expected genre categories. Kacey Musgraves’ star-crossed was moved from best country album to best pop vocal album, while Bo Burnham’s Inside (The Songs) was slotted in best compilation soundtrack for visual media, not best comedy album, as had been expected.
CELEBRITIES・3 DAYS AGO
edinazephyrus.com

The internet’s favorite rapper has finally put out his first album, “Montero,” after two singles and many social media teasers to build anticipation. Lil Nas X, at only 22 years old, has certainly established himself as a musician to be reckoned with. He initially became popular in 2019 with the viral song “Old Town Road,” breaking records as the longest-running #1 single at 17 weeks straight. He didn’t remain a one-hit-wonder, though—earlier this year, Nas dropped the lead single off his album “Montero (Call Me By Your Name)” along with a controversial music video that rapidly amassed millions of views. On Sept. 17, the highly-anticipated debut album “Montero” was released.
CELEBRITIES・8 DAYS AGO
mymixfm.com

Lil Nas X‘s instantly controversial video for “Industry Baby” has gotten the VEVO Footnotes treatment: You can now watch the making-of feature, complete with behind-the-scenes information and commentary from both the rapper and the clip’s director. Here are just some of the things you can learn about the clip from...
CELEBRITIES・12 DAYS AGO

Since the 2019 release of his record-smashing debut track “Old Town Road,” Lil Nas X has cemented himself as a pop culture mainstay thanks to his bold red carpet looks, creative music videos, humorous personality, and more. However, his rise to fame has not been an easy one. Since coming out as gay around the release of his first EP, Lil Nas X has faced persistent backlash from those who take offense to a confident queer Black man exhibiting pride in his sexuality. Unfortunately, it seemed as though the fear of persecution that prevented Lil Nas X from coming out for so long was being realized in a truly upsetting manner. The time for Lil Nas X’s bold response was imminent. Enter “MONTERO,” Lil Nas X’s debut album of reclamation, released Sept. 17. After spending recent years dealing with homophobic attacks, Lil Nas X finally takes back all the power society has stripped from him, a mission that is evident in the album’s meaningful lyrics, inventive sonic composition, and overall aesthetic.
MUSIC・7 DAYS AGO
wxerfm.com

Leave it to Lil Nas X to break the rules. Instead of thanking fans on social media for making his song “Industry Baby” number one, he took to the streets to thank them live and in person. LNX posted footage of himself riding around Hollywood in one of those hop-on...
MUSIC・7 DAYS AGO
seattlepi.com

The status quo on the songs chart has shifted, as Lil Nas X’s “Industry Baby” — a collab with Jack Harlow — finally reached No. 1 after spending a lot of its six-week run to date stuck in the No. 2 position. The tune moves up on the strength of 18.9 million streams.
MUSIC・8 DAYS AGO
Complex

Elton John has returned with his new album, The Lockdown Sessions. The 16-track release is a collection of collaborations Elton recorded during the COVID-19 pandemic. It’s highlighted by guest appearances from Young Thug and Nicki Minaj (“Always Love You”), Lil Nas X (“One of Me”), Dua Lipa (“Cold Heart”), 6lack (“The Pink Phantom”), Charlie Puth (“After All”), and more.
MUSIC・4 DAYS AGO

Lil Nas X is expected to chopper into Las Vegas on Saturday night to make a surprise appearance during a Diplo show, Page Six has learned. Sources say the sizzling-hot singer and rapper has decided last-minute to play “a few songs” toward the end of the superstar DJ’s set at the EDC Las Vegas festival.
LAS VEGAS, NV・3 DAYS AGO
Vibe

Trina Opens Up In New Episode Of ‘A Closer Look’ On ALLBLK: Watch Trailer

Trina is set to tell the story of her long-standing rap career during an episode of A Closer Look on streaming platform ALLBLK. As the latest episode in the docuseries, the show will feature the “Look Back At Me” rapper sharing details of her rise to fame, misconceptions from the public, and more. “I’m everybody’s savior. Who’s coming to save me?” questioned the Miami rapper in the preview. “Nobody,” she declared. In her personal life, the “B R Right” rapper recently revealed she and her boyfriend are now engaged. Raymond Taylor, stage name Ray Almighty, proposed to the Diamond Princess in September and she gladly...
TV & VIDEOS・1 DAY AGO
Variety

Travis Scott has unveiled the lineup for his third annual Astroworld Festival, taking place in his Houston hometown on Nov. 5-6, and like the rapper himself, it’s far-reaching and full of surprises, ranging from Lil Baby and SZA to Bad Bunny and Tame Impala to Earth Wind & Fire. Along with founder and headliner Scott, the full lineup — curated by Scott himself — for the festival, which takes place at Houston’s NRG Park, appears below. Scott has also released a limited number of additional tickets to the event, which are on sale now at AstroworldFest.com. The full music lineup is listed...
MUSIC・1 HOUR AGO
primetimer.com

Williams' announcement via Instagram comes three days after Cynthia Bailey announced her departure from the Bravo reality show after 11 years. Williams is not leaving Bravo, however. She's expected to star in a Bravo reality show focusing on her family. Williams joined Real Housewives of Atlanta for Season 5 in 2012. "After ten life-changing, gratifying, incredible years, it is finally time to begin my next chapter," Williams wrote. "Next season, I will not be returning to the Real Housewives of Atlanta franchise. This was a difficult decision to not only make, but also come to terms with. It's one I have put a lot of thought into and because of that, I know it's the right one."
CELEBRITIES・26 DAYS AGO