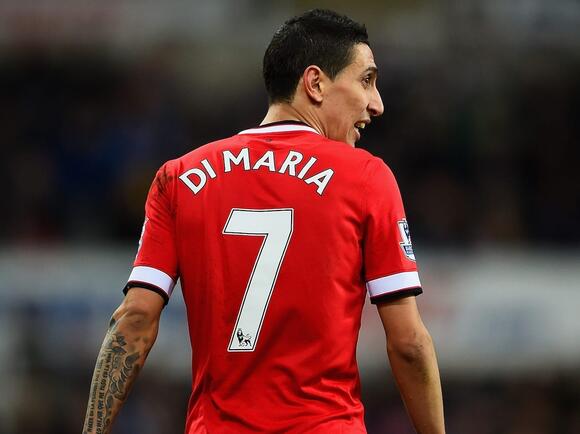 Manchester United flop Angel Di Maria says he "didn't give a fuck" about wearing the club's fabled No.7 shirt, and has blamed Louis van Gaal for his failed spell in England.

Di Maria was handed the famous jersey - which had previously belonged to United legend's Eric Cantona, David Beckham, and Cristiano Ronaldo - after completing a sensational $82 million switch from Real Madrid in 2014.

The Argentine failed to live up to his shirt's predecessors, however, lasting just one disappointing season at Old Trafford before being sold to Paris Saint Germain.

At the time he joined, Di Maria said he was "inspired" by Ronaldo, whom he played alongside at Madrid, to wear the No. 7.

He also said that he was excited to work under a "world class" manager in Van Gaal.

However, speaking with TyC Sports about his time at United, the 33-year-old has now doubled back on his previous statements.

"I didn't give a fuck about the Manchester United No. 7," he said. "At first they talked to me a lot about it, it was just a shirt.

"My problem at Manchester was the coach. Van Gaal was the worst of my career. I would score, assist, and the next day he would show me my misplaced passes.

"He displaced me from one day to the other, he didn't like players being more than him."

Di Maria has previously opened up on his torrid spell in England.

Speaking last year on radio station France Bleu, he said: "It wasn't the best period of my career, they didn't let me have my best time there.

"There were problems with the coach at the time. But thanks to God, I was able to come to PSG and be myself again."

In 2016, Di Maria also revealed how a robbery at his house while at United made him want to leave.

The winger was dining with his wife and one-year-old daughter in January 2015 when robbers used scaffolding poles to smash their way into his Cheshire mansion.

"After the robbery at my house, everything made ​​me want to leave quickly," he told Marca.

Cristiano Ronaldo has reportedly told Manchester United boss Ole Gunnar Solskjaer that he wants to start every game. Solskjaer was criticised for starting the Portuguese superstar on the bench for their 1-1 draw with Everton before the international break. The Norwegian has defended his decision to rest Cristiano Ronaldo, insisting...
PREMIER LEAGUE・7 DAYS AGO
ClutchPoints

Cristiano Ronaldo is claimed to be keen to be reunited with his former attacking team-mate Federico Chiesa with new club Manchester United. The pair formed a formidable partnership up front for the Old Lady previously, with the Italian’s passion and hard work, as well as his ability to thrive under pressure attracting him plenty of interest in recent years.
SOCCER・14 DAYS AGO
chatsports.com

Jesse Lingard is not panicking about his limited playing time and insists he can still make the World Cup squad as a Manchester United player. Gareth Southgate has always been a huge admirer of the midfielder but omitted him from his European Championship plans at the last minute. Lingard only started playing regularly last season after joining West Ham on loan in January and things would have been different had he played a full campaign.
PREMIER LEAGUE・14 DAYS AGO

Despite Portugal’s failed expedition at Euro 2020, the ex-Nigeria winger claims the Man United star is among the favourites to claim the prize. Manchester United star Cristiano Ronaldo could win the 2021 Ballon d’Or, according to Ajax legend Finidi George. Alongside Lionel Messi and Bayern Munich’s Robert Lewandowski, the Portugal...
PREMIER LEAGUE・13 DAYS AGO
Daily Mail

Former Manchester United goalkeeper Sergio Romero has joined Italian side Venezia on a free transfer until the end of the season. The 34-year-old has been a free agent since leaving United in the summer and has held talks with a number of clubs in England and across Europe but has opted to sign for Venezia who are 17th in Serie A, just above the relegation places.
PREMIER LEAGUE・11 DAYS AGO
chatsports.com

Paul Pogba 'is offered to Barcelona on a free transfer' amid Manchester United attempts to pin him down to new contract... as Old Trafford chiefs 'eye his French team-mate Aurelien Tchouameni as a replacement' should he depart

Barcelona are the latest club to be offered Paul Pogba on a free transfer next summer. And Manchester United already have a replacement on their radar in the form of Aurelien Tchouameni, should the World Cup winner depart. Pogba has less than a year left on his United contract, and...
PREMIER LEAGUE・8 DAYS AGO
chatsports.com

Jesse Lingard has opened up on 'random FaceTime calls' with Jose Mourinho as the Manchester United star revealed how support from Bruno Fernandes helped him regain his 'aura' on the pitch. Lingard, 28, has enjoyed a sensational 2021, with a strong loan spell at West Ham seeing the creative midfielder...
PREMIER LEAGUE・9 DAYS AGO

Jesse Lingard is reportedly prepared to leave Manchester United in the January transfer window. With his contract expiring at the end of the season, Lingard would be free to sign a pre-contract agreement with a non-UK club in the new year anyway - but there is a sense that he may want to get a move done then with next winter's World Cup in mind.
PREMIER LEAGUE・8 DAYS AGO
chatsports.com

Jadon Sancho must look to Cristiano Ronaldo for inspiration if he wants to thrive at Man United, says Peter Schmeichel... but club legend warns it could take £73m signing THREE YEARS to reach his best level at Old Trafford

Peter Schmeichel has told Jadon Sancho to mimic Cristiano Ronaldo if he wants to come good at Manchester United - even if it takes three years. The England winger has struggled to make much of an impact at Old Trafford since his £73million transfer from Borussia Dortmund over the summer.
PREMIER LEAGUE・3 DAYS AGO
World Soccer Talk

Dubai (AFP) – Dubai’s Madame Tussauds said Wednesday it will soon change the shirt of the wax figure of Cristiano Ronaldo after online backlash that the Portuguese footballer was wearing the “wrong” jersey. London’s renowned waxwork museum opened this week in its first outpost in the Arab world in Dubai,...
PREMIER LEAGUE・3 DAYS AGO
The Guardian

Paul Pogba 'can't hide the frustration in Manchester United's camp', insists Rio Ferdinand after midfielder's public moaning - and former club captain admits he 'wouldn't be happy' with French star if he were his team-mate

Rio Ferdinand has admitted he 'wouldn't be happy' with Paul Pogba and his recent public outburst had he been his team-mate. United's former captain also insisted, however, that Pogba simply could not contain the 'underlying frustration' within the Manchester United squad amid their faltering form. The Frenchman spoke candidly in...
PREMIER LEAGUE・4 DAYS AGO
CBS Sports

Manchester United take on Atalanta in UEFA Champions League Group F on Paramount+ with the Italians top of the pile and the Red Devils third after losing one of their two opening games. Home manager Ole Gunnar Solskjaer is under-fire after losses to Young Boys, West Ham United, Aston Villa...
UEFA・3 DAYS AGO
Yardbarker

Sancho must look to Ronaldo for inspiration to thrive at Manchester United, says Schmeichel

Peter Schmeichel has told Jadon Sancho to mimic Cristiano Ronaldo if he wants to come good at Manchester United – even if we need to wait patiently for things to click for the England international. Sancho has thus far struggled to make much of an impact at OId Trafford since...
PREMIER LEAGUE・3 DAYS AGO
firstsportz.com

Cristiano Ronaldo turned up yet again for his side in the UEFA Champions League and grabbed all the headlines after firing Manchester United to a come from behind 3-2 victory against Atalanta. The Premier League side looked all but out after a dismal first-half display which saw them trail 2-0 at Old Trafford.
PREMIER LEAGUE・2 DAYS AGO
Yardbarker

Manchester United superstar Cristiano Ronaldo was almost grabbed by a pitch invader in wake of the Red Devil’s victory over Atalanta on Wednesday night. Ronaldo, who was the hero for Manchester United in the previous match week of the Champions League against Villarreal, delivered the goods once again as Ole Gunnar Solskjaer’s men overturned a two-goal deficit to secure all three points against Atalanta.
PREMIER LEAGUE・2 DAYS AGO
CBS Sports

Manchester United completed a comeback from a two-goal deficit to beat Atalanta 3-2 in UEFA Champions League Group F on Wednesday with Cristiano Ronaldo scoring a late winner for Ole Gunnar Solskjaer's men. Mario Pasalic and Merih Demiral had given the Italians a significant advantage in the first half before the hosts began their second-half recovery.
UEFA・2 DAYS AGO
Yardbarker

After Marcus Rashford had handed Manchester United a lifeline at Old Trafford in their Champions League tie against Atalanta on Wednesday night, captain, Harry Maguire, popped up with 15 minutes to go to bring the Red Devils level. The first half performance from the hosts was so bad that United’s...
PREMIER LEAGUE・2 DAYS AGO
Daily Mail

Paul Pogba believes Manchester United showed their true character by bouncing back from recent poor performances and a two-goal deficit to seal a stunning 3-2 comeback win against Atalanta. All eyes were on Old Trafford on Wednesday to see whether under-fire Ole Gunnar Solskjaer could steer his side to victory...
PREMIER LEAGUE・2 DAYS AGO