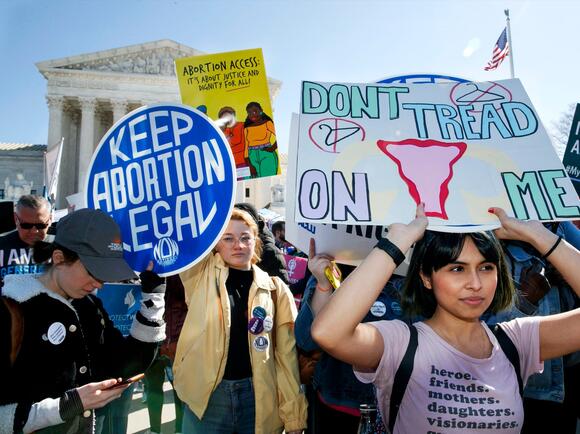 There are currently 11 US states with so-called trigger laws that would ban all or nearly all abortions if the Supreme Court overturned Roe v. Wade, the landmark 1973 case that legalized abortion nationwide.

Arkansas, Idaho, Kentucky, Louisiana, Mississippi, Missouri, North Dakota, South Dakota, Tennessee, Utah and Texas all have post-Roe laws that would immediately take effect if Roe falls, according to the Guttmacher Institute, a pro-abortion organization that compiles data on reproductive health.

Roe v. Wade has been thrust into the national spotlight after a Texas anti-abortion law, one of the most restrictive in the nation, took effect on Wednesday . Texas Gov. Greg Abbott signed the law on May 19, which bans abortions after six weeks - with no exception for rape or incest - despite many people being unaware they are pregnant at that time.

The court's majority argued in an unsigned opinion that the ruling was a technical one and not based on the substance of the law, which could still be legally challenged.

"In particular, this order is not based on any conclusion about the constitutionality of Texas's law, and in no way limits other procedurally proper challenges to the Texas law, including in Texas state courts," the justices wrote.

The Supreme Court's order could potentially spark a wave of Republican-led states enacting similar restrictions that threaten access to abortion.

The Texas law also comes as the Supreme Court is due to consider the constitutionality of abortion this fall in a case that could upend Roe v. Wade. The case, Dobbs v. Jackson Women's Health Organization, concerns a Mississippi law that would ban nearly all abortions after 15 weeks of pregnancy.

The Center for Reproductive Rights estimates that 34 states and five territories could cease to protect abortion rights if Roe is thrown out.

Now we know all kids have a mind of their own and some do what they want to do. And some get abortion without letting their parents know. And now you want all females to have their babies. It's about to be a lot of them now

Contraceptives are available to all women, Roe vs Wade has gotten out of hand, abortions shouldn’t happen after 3 months, gives a women a chance to figure out her options and the health of the fetus is known

Republican Senator and physician Bill Cassidy says senility tests should be mandated for ALL federal government leaders including Biden, 78, and Supreme Court justices before the 'rapid decline' in your 80s

Bill Cassidy, a U.S. senator and physician, said all leaders in the federal executive, legislative and judiciary should be subject to cognitive tests as they age, claiming they should undergo this evaluation before the 'rapid decline' in their 80s. The 64-year-old Republican from Louisiana told Axios on HBO in an...
CONGRESS & COURTS・1 DAY AGO
USA TODAY

Abortion at the Supreme Court: A road map to the cases pending over Texas' six-week ban

The stakes in one of the most significant Second Amendment cases in U.S. history are high. The Supreme Court’s ruling in New York State Rifle & Pistol Association v. Bruen, expected by mid-2022, could declare a New York state restriction on carrying concealed handguns in public places unconstitutional. Such a ruling in favor of the plaintiffs, […] The post Second Amendment case before Supreme Court could topple gun restrictions appeared first on Georgia Recorder.
CONGRESS & COURTS・2 DAYS AGO

A new normal at the Supreme Court

October 18, 2021 - In many ways, the October 2021 Term has begun with aspirations of business as usual. The Court is back to in-person arguments (for the first time since February 2020), with a docket full of headline-grabbing cases. And unlike four of the last five Terms, the Court isn't starting its work with a vacancy or a new Justice. But with a new oral argument structure, a potential three-Justice bloc of swing voters, and brooding controversy over the Court's process for emergency applications, a new kind of "normal" is afoot. This Term promises to help shape it.
CONGRESS & COURTS・1 DAY AGO
The Independent

The Biden administration is asking the Supreme Court to block the Texas law banning most abortions, while the fight over the measure's validity plays out in the courts.The law has been in effect since September, aside from a district court-ordered pause that lasted just 48 hours, and bans abortions once cardiac activity is detected, usually around six weeks and before some women know they are pregnant. The Justice Department asked the high court Monday to lift an order imposed by a conservative federal appeals court that has allowed Texas to continue enforcing the nation's strictest curbs on abortion through a novel law that was written to make it hard to challenge in the federal court system. The department had announced its intentions last Friday.It's not clear whether the administration will prevail at a Supreme Court with a conservative majority that has been fortified by three appointees of former President Donald Trump and already has agreed to hear a major challenge to abortion rights in a case from Mississippi.
CONGRESS & COURTS・1 DAY AGO
The Guardian

The courts have a new chance to block Texas’s abortion law. They must take it

Sadly, predictably and appallingly, on October 14, a three judge panel of the US court of appeals for the fifth circuit has allowed Texas’s “Bounty-Hunter” anti-abortion law to go back into effect while the court considers the case on the merits. Every day that the fifth circuit panel’s unlawful order keeps the statute in operation brings irreversible injury to women in Texas. US Attorney General Merrick Garland has properly decided to seek emergency relief from the US supreme court.
CONGRESS & COURTS・2 DAYS AGO
Harper's Bazaar

What to Know About the Case That May Overturn Roe v. Wade

In the wake of a federal judge’s ruling to ban preterm viability abortions in Texas, another crucial abortion case is mounting in Mississippi. Only this time, it’s going to be heard by the U.S. Supreme Court, and its outcome could result in sweeping and immediate ramifications across the country. On...
CONGRESS & COURTS・1 DAY AGO

Utah, other states ask court to side with Texas in abortion lawsuit

Utah Attorney General Sean Reyes has signed the state on to a "friend of the court" brief in support of Texas in a lawsuit over its controversial abortion law.
UTAH STATE・2 DAYS AGO
Daily Mail

The Biden administration announced on Friday it would ask the Supreme Court to throw out a Texas law that bans almost all abortions after a federal appeals panel allowed the restrictions to stay in place. Texas clinics are running out of options as they try to beat a ban on...
CONGRESS & COURTS・4 DAYS AGO
Slate

Liberal Justice Sonia Sotomayor said that the Supreme Court had implemented a new system of oral arguments because the men were talking over the women too much. During virtual oral arguments of the pandemic, the high court implemented a system where justices were each given a turn to ask questions in order of seniority. Before that, justices asked questions in a free-for-all.
CONGRESS & COURTS・5 DAYS AGO

Liberal Justice Elena Kagan clashed with her conservative colleague Brett Kavanaugh during a Supreme Court hearing over the Boston Bomber on Wednesday as they heard arguments about whether an appeals court was justified in overturning Dzhokhar Tsarnaev's death sentence. It was a rare breach of protocol as liberal and conservative...
CONGRESS & COURTS・6 DAYS AGO
Newsweek

The commission said the proposal of imposing term limits on Supreme Court justices had "the most widespread and bipartisan support."
CONGRESS & COURTS・4 DAYS AGO
Business Insider

The Department of Justice said Friday it will ask the Supreme Court to effectively block the enforcement of a restrictive Texas abortion law while legal disputes play out. That law bans most abortions after as early as six weeks of pregnancy and empowers private citizens to sue anyone who "aids or abets" in the procedure.
CONGRESS & COURTS・4 DAYS AGO

Veronika Granado anxiously stood before the judge knowing that if she said something wrong, things could end badly for her.But the 17-year-old hadn't committed a crime. She had not filed a lawsuit. Granado was in a Texas court that day to ask permission to get an abortion.She was among thousands of teens burdened with additional hurdles to legal abortion care, especially if they are of color or live in states where abortion access is already severely limited. Thirty-eight states require some form of parental consent or notice for anyone under 18 to get an abortion. Of those, nearly all...
LAW・5 DAYS AGO
Dallas News

WASHINGTON — Of the three 5th U.S. Circuit Court of Appeals judges who lifted a district judge’s temporary ban on enforcing Texas’ new abortion law, two have strong ties to Texas, Dallas specifically — in more ways than one. Both Judge James Ho, who made headlines for calling abortion a...
TEXAS STATE・6 DAYS AGO
HollywoodLife

The Massachusetts senator also explained that the new law will be most harmful to people who don’t have easy access to abortion while appearing on ‘The View.’. Massachusetts Senator Elizabeth Warren said that it time for the government to listen to the American people and make sure Roe V. Wade is secure during a Wednesday October 13 appearance on The View. Joy Behar asked what Democrats can do to help protect reproductive rights, amid Texas’ abortion law, which virtually bans abortions after six weeks. Warren noted how many Americans support a women’s right to abortion.
TEXAS STATE・6 DAYS AGO
CNBC

The Supreme Court on Tuesday considered a Republican attorney general's bid to defend a restrictive Kentucky abortion law. Some liberal justices sounding skeptical that a lower court was right to reject that request to intervene. The court previously voted not to block a Texas law banning most abortions after as...
KENTUCKY STATE・7 DAYS AGO