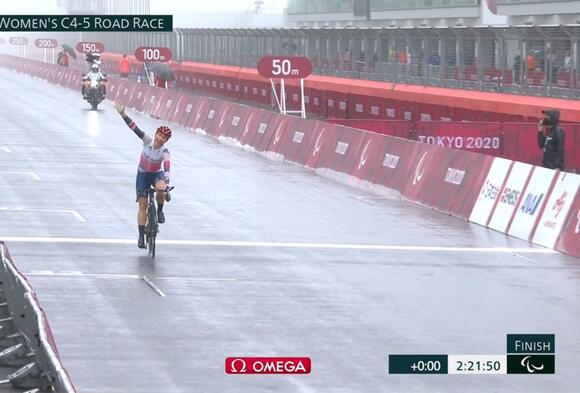 Dame Sarah Storey has made history for Team GB as she powered her way to her record 17th career gold medal in the women ’s road race.

The cycling superstar became the most successful ever British Paralympian when she crossed the line ahead of teammate Crystal Lane-Wright, who took the silver medal.

Storey, 43, tied swimmer Mike Kenny’s British record of 16 golds when she won the cycling time trial earlier this week and now own the record outright.

She began her athletic career as a swimmer in the 1992 Games in Barcelona before switching to cycling, where she has dominated the competition.

Tokyo is Storey’s eighth Paralympic Games and her fourth as a cyclist.

From Beijing 2008 onwards, she has won 11 cycling golds on the track and road, never winning a Paralympic medal of another colour.

Storey and Lane-Wright caught breakaway leader, German rider Kerstin Brachtendorf, at the start of the final lap and the pair left the chasing pack behind them in the rain and mist.

After turning back onto the motorsports track for the sixth and final time, Storey put in a final burst to take the lead and won the race with her arm held aloft in triumph.

“Sweet 16. Can I be 16 again?” Storey said after being presented her time trial gold medal on Tuesday.

“I never set out on this journey to be Britain’s greatest Paralympian, but to match the best man and to have more other medals is just a dream come true.”

And she added: “I am just so chuffed. I have been preparing for this for such a long time. There have been so many parts to it, both my bike and physical preparations.”

The local backcountry has been filled with color this autumn. It likely peaked last weekend but there is still opportunity to get out and enjoy the leaves. For more photos see page 22. photo by Nolan Blunck.
GOLD・12 DAYS AGO
The News-Gazette

URBANA — The race hadn’t even reached its halfway point, but as Susannah Scaroni glanced backward during the T54 5,000 meters, her first race at the Tokyo Paralympics last month, she realized she had made a mistake in her category’s first race of the Games. She built too big of...
URBANA, IL・13 DAYS AGO
ctwrestling.com

Rohan, Everglades in a rematch for gold medal

With three games left Tuesday on Day Two of The Villages Pickleball Men’s Cup, Team Rohan needed to secure one game victory to ensure an appearance in Thursday’s gold medal match. Rohan picked up that one win and tied in their match against Team Everglades at Rohan Regional Recreation Complex...
THE VILLAGES, FL・12 DAYS AGO

There was double cause to celebrate for Great Britain’s Elinor Barker at Tokyo 2020, in 2021. Not only did the Welsh cyclist win silver in the track cycling team pursuit event in Japan with Team GB but, she has since shared, she achieved the feat while expecting her first child.
WORLD・12 DAYS AGO
Health

This video is part of Health's My Mantra series. Follow along with new videos on our Instagram page and share your own words of wisdom using #MantraMonday. American Paralympic swimmer Mallory Weggemann has always dreamed big: She's competed in three Paralmpic Games and won five medals, three of which are gold. And she credits her personal mantra with helping her stay focused on her dreams.
SWIMMING & SURFING・14 DAYS AGO
hngnews.com

When he was 11 years old, John Boie discovered what he wanted his future to hold. All that was left was to accomplish those goals. So Boie went to work. It took 19 years of effort—and, thanks to COVID-19’s impact on the 2020 Paralympic Games, a year of waiting—for Boie to transform from a kid attending his first youth wheelchair basketball camp at UW-Whitewater to a 30-year-old at the top of the medals stand at the Tokyo 2020 Paralympic Games.
MILTON, WI・12 DAYS AGO
rhinotimes.com

Usually when you miss out on an opportunity to win a gold medal, you have to wait several months -- if not years -- to get another opportunity. But in the Age of COVID, things are not yet "usual" in the world of sports, and while that's mostly resulted in a lot of unfortunate changes (delayed/cancelled events, limited/no fan attendance), in this case the COVID-afflicted schedule has resulted in a positive scenario for competitors in international wrestling. In addition to the Tokyo Olympics, postponed from summer 2020 to August 2021, this year also contains the regularly-scheduled Wrestling World Championships in Oslo, going on now in Oslo.
COLLEGE SPORTS・13 DAYS AGO
theforumnewsgroup.com

Queens Borough President Donovan Richards, Jr. presented the Key to Queens to Olympic gold medalists Dalilah Muhammad and Tina Charles at a ceremony Friday at Borough Hall. Richards also presented the Olympic duo with proclamations declaring Oct. 1, 2021 as both Dalilah Muhammad Day and Tina Charles Day in the Borough of Queens. Muhammad and Charles received City Council proclamations from the ceremony’s co-sponsor, Councilwoman Adrienne Adams (D-Jamaica), in recognition of their achievements as well.
QUEENS, NY・10 DAYS AGO
93.7 The Fan

Crosby gets chance for third Olympic gold medal with Canada

Penguins captain Sidney Crosby will once again represent his home country of Canada in the 2022 Winter Olympics in Beijing, China. Crosby was named to the team along with Edmonton’s Connor McDavid and Vegas’ Alex Pietrangelo. Much to the chagrin of USA Hockey fans, Crosby has led Canada to gold...
NHL・14 DAYS AGO
Shropshire Star

Shropshire's gold medal-winning Paralympian Mickey Bushell was invited to officially open a new salon in Telford. The salon, called Shades and Fades, has opened within the Rise Fitness gym at AFC Telford United's football ground. Mr Bushell from Telford, who was invited to the opening along with special guest Face...
BEAUTY & FASHION・5 DAYS AGO

CHARLOTTE, N.C. — A paralympic swimmer from North Carolina won two gold medals at the 2020 Tokyo Paralympic Games this past summer. It was an achievement she had dreamed of since childhood. What You Need To Know. Hannah Aspden won a gold medal in the 100-meter backstroke at the 2020...
CHARLOTTE, NC・6 DAYS AGO
SkySports

Jenkins was part of the coaching staff at the Tokyo Olympics and also a regular at World and European Championships and the Commonwealth Games. Lee, who teamed up with Tom Daley to clinch the men's synchro title in Japan this summer, revealed Jenkins had recently become his coach. He wrote...
SPORTS・6 DAYS AGO
olympics.com

After winning bronze at the National Open athletics meet last month, Haryana runner Ayush Dabas clinched the gold medal in the men’s sprint at National Open 400m Championships 2021 in Delhi on Tuesday. A national under-23 champion, Ayush Dabas clocked 46.86 seconds at the Jawaharlal Nehru Stadium to take the...
SPORTS・6 DAYS AGO
teamusa.org

Jason Brown skates in the Men's Free Skate during the U.S. Figure Skating Championships on January 17, 2021 in Las Vegas, Nevada. Jason Brown was nearly sitting in gold-medal position after the short program at the Finlandia Trophy, but lost out via tiebreak to Keegan Messing of Canada. When it...
LAS VEGAS, NV・8 DAYS AGO
SkySports

Georgia O’Connor is just 21 and hasn’t fought as a professional yet but already speaks powerfully about living “each day as your last” and chasing dreams. She was a fantastic amateur boxer but now, ahead of her pro debut, is the unlikely future of women's boxing because her path to this moment has been a rollercoaster which threatened to derail.
COMBAT SPORTS・5 DAYS AGO
punditarena.com

‘Me achieving success and then other people seeing that they want to have that success in their lives is really nice to see.’. It’s been almost a month and half since Nicole Turner claimed a silver medal at the Paralympic Games, and while things are starting to calm down, she is now realising that she has had a long-term effect on people.
CELEBRITIES・5 DAYS AGO
FOX 16 News

Britain’s curlers are embracing Moneyball in a bid to get an edge over their rivals at the Winter Olympics. On Thursday, Team GB named their first six athletes for Beijing 2022, with the world champion Bruce Mouat going for double gold in the mixed doubles and men’s event. The 27-year-old...
SPORTS・4 DAYS AGO