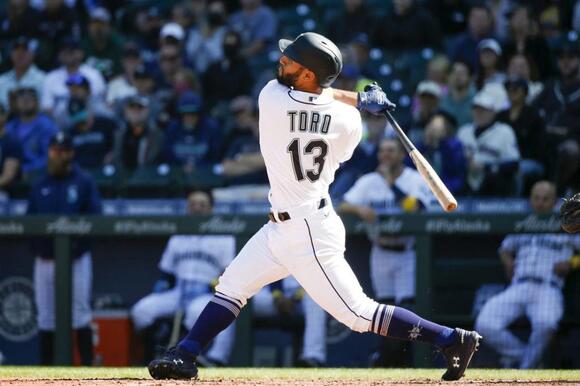 Toro hit a sacrifice fly to center field with one out and the bases loaded in the sixth inning to score J.P. Crawford for the game’s lone run.

Toro hit a grand slam against his former team in the eighth inning of Seattle’s 4-0 victory Tuesday night.

Five Mariners pitchers combined for the shutout, allowing nine hits. Left-hander Justus Sheffield (6-8), activated from the injured list earlier in the day after being out since July 7 with a strained left forearm, pitched one inning of relief for the victory. Right-hander Paul Sewald got the final four outs for his eighth save of the season. 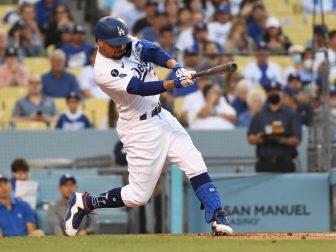 Crawford led off the sixth by lining a single over the head of Astros pitcher Jake Odorizzi (6-7). Following a walk to Mitch Haniger, fellow right-hander Phil Maton relieved Odorizzi. After one strikeout, Maton walked Ty France to load the bases.

Toro lofted the next pitch into center, with Crawford tagging and sprinting home to beat the throw.

Odorizzi was charged with the lone run after allowing two hits in five-plus innings. He walked two and struck out seven.

The Astros’ best chance to score came in the eighth. Jake Meyers reached on an infield single off right-hander Drew Steckenrider before pinch-hitter Aledmys Diaz grounded into a double play. Jose Altuve drew a walk and Michael Brantley lined a single to right. Sewald replaced Steckenrider and caught Carlos Correa looking at a called third strike to end the inning.

Houston got one-out singles from Yuli Gurriel and Alex Bregman in the ninth before Sewald induced Kyle Tucker to fly out to left and whiffed Meyers on a called third strike with a full count to end it.

The biggest winner of the 2021 major league season is … the 2017 Houston Astros. Settle down. I have not come to exonerate or forgive the sign stealers. I would not argue with anyone who feels the players got off easy by not facing suspension, and the bans on, say, Alex Cora and A.J. Hinch should have been longer than one year considering their one-year expulsions came in the one year the major league season was 60 regular-season games.
MLB・27 DAYS AGO
CBS Sports

The Chicago White Sox were eliminated from the playoffs on Tuesday after losing Game 4 of their American League Division Series, 10-1, to the Houston Astros. The White Sox, specifically manager Tony La Russa, did not go quietly into the winter, however. Rather, La Russa made it clear that he...
MLB・9 DAYS AGO
FanSided

A Jose Altuve single would’ve kept the Astros alive in the top of the fifth inning in ALCS Game 4 but the umpires hosed Houston instead. The Houston Astros entered Game 4 of the ALCS in dire need of a win over the Boston Red Sox. Unfortunately, the umpire crew at Fenway Park wasn’t trying to do them any favors.
MLB・2 DAYS AGO
KAJA KJ 97

Astros fans were living for these guys.
MLB・22 DAYS AGO

Jose Altuve was targeted by Boston Red Sox fans with a profane chant during Game 3 of the ALCS at Fenway Park on Monday night. Red Sox fans could be heard chanting, “f— Altuve” during Game 3. The chants began early in the game, according to reporters in attendance. The chants continued even in the third inning after Altuve was unable to pick a throw that bounced into second while covering the bag.
MLB・3 DAYS AGO
CBS Sports

Verlander (elbow) is expected to receive a qualifying offer from the Astros this offseason, Chandler Rome of the Houston Chronicle reports. Verlander could potentially have an interesting decision on his hands. If healthy, he'd almost certainly receive more than the qualifying offer, which was worth $18.9 million over one year last year. He'll enter next season as a 39-year-old coming off of Tommy John surgery, so it's much less clear what his value will be on the open market. If he rejects the offer and signs elsewhere, Houston will receive draft-pick compensation.
MLB・15 DAYS AGO
Larry Brown Sports

Remember during the AL Wild Card Game a few years back between the New York Yankees and Oakland Athletics? A matchup that resulted in a 7-2 victory for the Bombers was overshadowed by the baseball community whining about an innocent A’s fan getting three ounces of beer dumped on his head during a home run celebration.
MLB・14 DAYS AGO

Carlos Correa once again came up huge for the Houston Astros in October. He had the celebration to match. The Astros came back to beat the Boston Red Sox 5-4 in Game 1 of the ALCS on Friday night in Houston. The Red Sox led 3-1 after scoring three in the third. They carried that lead until Jose Altuve tied it with a 2-run home run in the bottom of the sixth. An inning later, Correa gave his Astros the lead in a huge moment.
MLB・6 DAYS AGO
FanSided

Jose Altuve had an epic slide into home plate for the Houston Astros in Game 1 of the ALDS. The Houston Astros and the Chicago White Sox are battling in Game 1 of the ALDS at Minute Maid Park, except right now it’s not much of a battle. The game is unraveling quickly for the White Sox, while everything is going right for the Astros. Houston’s second baseman Jose Altuve had an incredible slide into home plate that resulted in him completely avoiding Chicago’s catcher Yasmani Grandal.
MLB・14 DAYS AGO
Larry Brown Sports

Alex Cora has generally made very good managerial decisions with his Boston Red Sox this year. But he made one terrible decision in Game 5 of the ALCS on Wednesday that backfired. The Houston Astros entered the top of the sixth leading 1-0 on a second inning home run by...
MLB・1 DAY AGO
USA TODAY

Three of our six experts think the NL Central champions will go on to win the World Series.
MLB・15 DAYS AGO

The Chicago White Sox came up short in the ALDS with a 3-1 series loss to the Astros. These three players won’t be returning to run it back in 2022. After fighting back to make the ALDS series 2-1 with a win at home, the Chicago White Sox were on the wrong end of a hit parade again in Game 4 on Tuesday afternoon, giving the Astros the series win and ending Chicago’s postseason abruptly.
MLB・9 DAYS AGO
chatsports.com

When acquired from the Houston Astros at the Trade Deadline this season, Abraham Toro was considered a third baseman, however he played almost exclusively at second base due to Kyle Seager having third base on lock. He was quickly the hottest hitter in the Mariners lineup for weeks after he was acquired, and in August he slashed .296/.377/.398 with a 123 wRC+.
MLB・13 DAYS AGO
MLB Game Highlights

Tim Anderson and Lucas Giolito discuss the team competing, possibility of winning three in a row and a must-win ahead of them in ALDS Game 3.
13 DAYS AGO
Sportsnaut

Chicago White Sox come home with a 2-0 deficit in the ALDS after a tense Game 2 vs. the Houston Astros turns into a blowout: ‘We know our backs are against the wall’

The Chicago White Sox had a seventh inning to forget. Now they find themselves in a huge hole and facing elimination in the American League Division Series. The Houston Astros scored five runs in the seventh and beat the Sox 9-4 in Game 2 of the ALDS in front of 41,315 on Friday at Minute Maid Park. The Astros have a commanding 2-0 lead in the best-of-five series. “We know what we have to do, ...
MLB・14 DAYS AGO
The Guardian

White Sox pitcher Ryan Tepera implied that Houston may have been stealing signs in Games 1 and 2 of their AL Division Series after Chicago won the third game on Sunday night. Houston were going for a sweep after they rolled to a pair of impressive victories at home. But they struck out 16 times in a 12-6 loss at Chicago after doing so a total of 16 times in the first two games.
MLB・11 DAYS AGO
ABC 7 Chicago