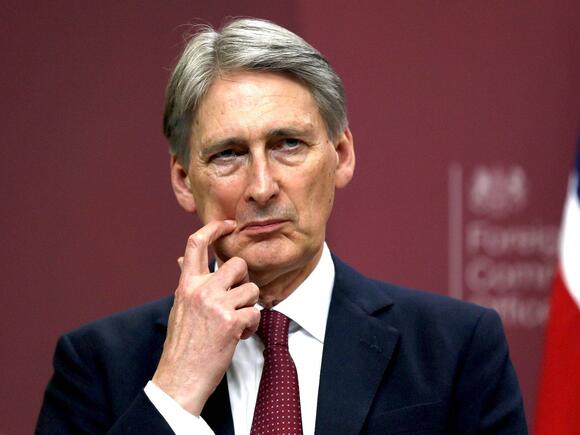 Lord Philip Hammond, the former Chancellor of the Exchequer, sought legal advice in an attempt to stop the UK's lobbying watchdog from publishing letters stating he had broken government rules on lobbying, according to newly-published correspondence between the two.

The Advisory Committee on Business Appointments (ACOBA) published its letters to and from Hammond on Wednesday.

The row centres on contact made in July 2020 by Hammond to a top civil servant at the Treasury, the department Hammond previously led, in which he followed up on an approach made by OakNorth, a bank he was paid to advise. This contact was first reported by The Sunday Telegraph .

Official rules forbid former ministers from lobbying the government for two years after their departure. Hammond left the Treasury in July 2019.

A letter published Wednesday from Lord Eric Pickles, the chair of ACOBA, to Hammond said that the MP was "seeking advice on possible legal action, including an injunction to prevent publication" of a previous letter - drafted by ACOBA's secretariat and sent to Hammond ahead of publication - which said Hammond had broken the government's rules by contacting the Treasury.

A spokesperson for Hammond told Insider that an injunction "was never Lord Hammond's intention. He simply wanted some time (a matter of a few hours) to go back to ACOBA with a letter that was properly informed by a legal understanding of the situation. That understanding was then reflected in Lord Hammond's letter to Lord Pickles yesterday afternoon [Tuesday]."

In the Wednesday letter, Pickles said that while Hammond's contact was not "a blatant and deliberate attempt to breach the Rules," it was clear that OakNorth only managed to have direct engagement with a top Treasury official thanks to Hammond's time leading the department.

Hammond said in a Tuesday letter to ACOBA that his contact with the Treasury was not a breach of government rules, as it was regarded as making a "pro bono offer" with the purpose of his contact being neither to "influence policy" nor to "secure business."

Hammond claimed that ACOBA intended to "change the wording of the restrictions contained in future advice to prevent all contact with a former department on behalf of a client," which Pickles disputed.

ACOBA is not responsible for writing official rules, only for applying the rules when offering advice to former ministers and civil servants seeking employment.

Hammond said ACOBA was "moving the goalposts" by judging his compliance with new restrictions, not those set out in its initial advice to him, and insists there was no breach in either the letter or the spirit of the rules.

"I have complied with both the letter and the spirit of them. It is also clear from the facts that I did not obtain any 'privileged access' for OakNorth to HM [Treasury] - the meeting had already taken place (without any intervention by me) and [senior civil servant] Charles Roxborough's email confirms he was already aware of OakNorth's generous offer to Government and that the Department was actively considering it," Hammond wrote.

In addition to writing to Hammond, Pickles has also written to Michael Gove, Chancellor of the Duchy of Lancaster, informing him that ACOBA had found that Hammond breached the rules, leaving any further action to the government.

One possible step the government is considering against those who do breach the rules is to have the breach noted when individuals are vetted by the Honours Committee, a step that is unlikely to bother Hammond, who has sat in the House of Lords since October 2020.

The Hammond spokesperson told Insider: "Lord Hammond emailed the Treasury last year to confirm that the relevant people had received a free-of-charge offer of support with COVID response from OakNorth Bank. He was not seeking to influence policy, obtain funding or win business from the Government.

"The simple question for ACOBA is: did his email breach any of the restrictions that ACOBA had placed upon him when approving his role with OakNorth? The answer is clearly that it did not - but ACOBA's substantive letter dated 31st August seems unwilling to say so explicitly, instead offering opinions while avoiding a straight answer to the question of fact."

ACOBA did not immediately respond to Insider's request for comment.

The number of Russians fleeing the country to evade Putin's draft is likely bigger than the original invasion force, UK intel says

The UK said the number of fleeing Russians likely exceeded Putin's original invasion force. Reports said least 190,000 Russians had left since Putin said he would draft reservists for Ukraine. The exodus is likely to affect Russia's economy and add to "brain drain," the UK said. The number of Russians...
U.K.・2 DAYS AGO
Business Insider

At least 200,000 Russians have fled the country after Putin ordered a partial mobilization. Many are heading to neighboring countries where they can enter visa-free, like Kazakhstan and Georgia. The influx has jacked up hotel rates and rents in these places. Airfares out of Russia are up too. A surge...
VLADIMIR PUTIN・3 DAYS AGO
Business Insider

China and India, key partners to Russia, have recently expressed concerns to Putin about the war. Putin on Friday declared four regions of Ukraine part of Russia, a move rejected by the West. In a UN vote condemning the annexation as illegal, China and India both abstained. China and India...
WORLD・1 DAY AGO
Business Insider

Homeowners and potential buyers have been left feeling “totally powerless” this weekend as thousands wait to find out whether their mortgage deals will now cost them hundreds of pounds extra a month while brokers report people already pulling out of the market or preparing to downsize. The chancellor...
REAL ESTATE・30 MINUTES AGO
Business Insider

Spain is doubling down on taxing the rich with a so-called 'solidarity tax' on 23,000 super wealthy people

Around one in every 1,000 taxpayers in Spain will have to pay a new wealth tax. The government announced the tax on Thursday, which it expects will bring in up to 1.5 billion euros. It also unveiled tax cuts for small businesses, the self-employed, and workers on or under the...
INCOME TAX・1 DAY AGO