By Clémence Michallon
The Independent
24 days ago 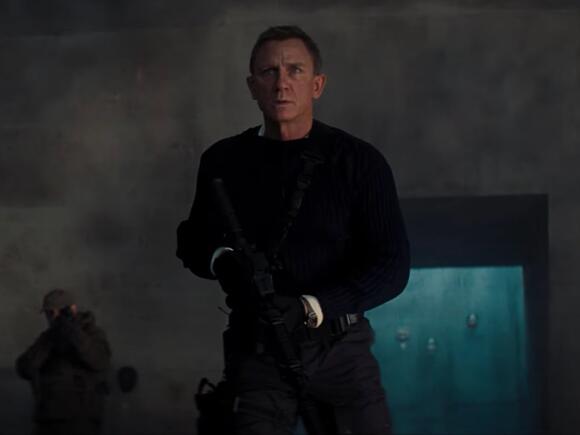 The final trailer for No Time To Die has been unveiled.

Daniel Craig features prominently as 007 in the clip, which was published on Tuesday.

“James Bond,” Safin narrates pensively at one point. “Licensed to kill. In love with Madeleine Swann. I could be speaking to my own reflection, only your skills die with your body, and life is all about leaving something behind, isn’t it?”

The trailer also includes plenty of action shots, including a car chase and a vertiginous plane sequence.

No Time To Die , which is expected to be Craig’s final outing as 007 , will be released on 30 September 2021 in the UK after being delayed by the coronavirus pandemic.

Directed by Cary Joji Fukunaga, No Time To Die begins with Bond having “left active service” and “enjoying a tranquil life in Jamaica”.

“His peace is short-lived when his old friend Felix Leiter from the CIA turns up asking for help,” the movie’s logline adds. “The mission to rescue a kidnapped scientist turns out to be far more treacherous than expected, leading Bond onto the trail of a mysterious villain armed with dangerous new technology.”

Rachel Avery Daniel Craig wedding: James Bond star Daniel is married to Rachel Weisz – and their 2011 wedding day just might surprise you. While Daniel Craig may be stepping down from the James Bond franchise, he is still very much committed to his wife Rachel Weisz, whom he has been married to since 2011.
CELEBRITIES・18 DAYS AGO
The Independent

Daniel Craig attended the premiere of his fifth and final James Bond film, No Time To Die, with his daughter.The actor arrived at the Royal Albert Hall on Tuesday 28 September with his eldest child, 29-year-old actor Ella Loudon.Craig wore a pink velvet dinner jacket from London-based haberdashery The Anderson & Sheppard. He paired the statement piece with a crisp white shirt, black bow tie and black trousers.Posing for the cameras alongside her father, Loudon cut a smart figure in an ivory silk shirt, black blazer and trousers, and a blue Fabergé pendant. Her blonde hair was swept back into...
CELEBRITIES・16 DAYS AGO
theplaylist.net

There’s a lot of James Bond discussion right now. Obviously, the main reason is that, after a long delay, Daniel Craig’s last jaunt as 007, “No Time to Die,” is hitting theaters in a matter of weeks. With that, another era of Bond comes to an end. And director Cary Fukunaga thinks this era of James Bond showed the character go through a bit of a change, especially in relation to the treatment of females in the franchise, which was something that was desperately needed after earlier iterations including Sean Connery’s films as the superspy.
MOVIES・22 DAYS AGO
CNET

You could say No Time To Die is the Bond movie to end all Bond movies. Already a hit in the UK, the 25th official 007 movie closes Daniel Craig's 15-year tenure as James Bond with a bang. "In Daniel Craig's final outing as the suave superspy, James Bond finally...
MOVIES・14 DAYS AGO

Every actor who's played James Bond, ranked from worst to best

"No Time To Die," Daniel Craig's fifth and final outing as James Bond, hits US theaters on October 8.
MOVIES・13 DAYS AGO
GoldDerby

This weekend marks the first time Rami Malek is hosting “Saturday Night Live,” but it turns out he’s not being welcomed with open arms by the regular cast members. “You know Rami, a lot of people find your eyes unnerving, but I don’t see it,” Ego Nwodim jokingly tells him in the latest “SNL” preview video (watch above). When Bowen Yang challenges them to a staring contest, Nwodim takes one look into Malek’s peepers and declares matter-of-factly, “This man is a demon.” The episode airs Saturday, October 16 on NBC. SEEKim Kardashian’s ‘SNL’ monologue zings family, Kanye West and O.J. Simpson In...
TV & VIDEOS・11 HOURS AGO
Newsweek

Why Exactly Is Daniel Craig Leaving James Bond After 'No Time To Die'?

James Bond will never be the same once the credits role on the next 007 movie, No Time To Die, because it's Daniel Craig's last appearance as the famous British spy. It's been known for a while that Craig would be hanging up his license to kill after this Bond film, but what has he said about his departure from the franchise?
MOVIES・15 DAYS AGO
The Independent

No Time to Die: The classic James Bond film you should watch before seeing new Daniel Craig outing

No Time to Die is finally here – and it features several references to a classic Bond film.Daniel Craig returns to play the British spy one final time, for an adventure that pits him against Rami Malek’s villain, Lyutsifer Safin.The critical reception has been largely positive – but audiences will undoubtedly get more from the film should they rewatch On Her Majesty’s Secret Service (1969) before seeing it.It turns out that No Time to Die has several references to George Lazenby’s sole Bond outing, so watching it might help when it comes to unpacking the new film’s ending. For...
MOVIES・14 DAYS AGO

Daniel Craig's era as James Bond comes to an end with 'No Time to Die.' What's next for the franchise?

On the last night of filming "No Time to Die," many of the crew members stuck around Pinewood Studios near London until 1:30 a.m. to watch Daniel Craig wrap his last scene as the infamous British spy. The climax of Craig’s five-film run, which wrapped in October 2019 and debuts...
MOVIES・9 DAYS AGO
Harvard Crimson

‘No Time to Die’ Review: A Fitting, Emotional Finale for Daniel Craig’s Bond

Daniel Craig stars as James Bond in "No Time to Die" (2021), directed by Cary Joji Fukunaga. By Courtesy of Nicola Dove / MGM. After five films as 007, Daniel Craig is hanging up his suit and his license to kill. It’s taken a litany of rewrites and a release delayed almost two years by a global pandemic, but “No Time to Die” has finally found its way to theaters. And somehow, despite a bloated script held together by nothing more than a single flimsy strand of scotch tape, director Cary Joji Fukunaga (“Beasts of No Nation”) delivers one of the best Bond conclusions. Craig’s swan song farewell is packed with strong character work, adrenaline-fueled action scenes, and a surprisingly effective emotional sendoff.
MOVIES・11 DAYS AGO
GreenwichTime

The movie’s called No Time to Die and has a runtime of two hours and 43 minutes. Someone, somewhere, is having a laugh. But not James Bond, who, for as long as Daniel Craig has been playing that iconic Ian Fleming creation (especially in the most recent films of his 15-year tenure) has tended to be a somber sort. Not a stick in the mud or a walking stiff, mind you; even if Craig’s era of the franchise has felt slightly stripped of outright camp, it hasn’t killed its sense of humor. The movies have simply leaned into what’s proven to be surprisingly vulnerable in Craig’s incarnation. No Time to Die, his final outing in the role, is no different.
MOVIES・14 DAYS AGO

Daniel Craig is bidding adieu to his famous role with 'No Time to Die.' Watch back the full interview with Ryan Seacrest here:
CELEBRITIES・2 DAYS AGO
USA TODAY Sports Media Group

It’s Bond, James Bond Week here at For The Win, where we’ve shaken (not stirred) five days’ worth of content to celebrate the premiere of the iconic franchise’s 25th movie, No Time to Die. After 15 years as James Bond, Daniel Craig is saying goodbye to the iconic role he...
MOVIES・11 DAYS AGO
York Dispatch Online

'No Time to Die': Daniel Craig's swan song as James Bond worth the wait

By the numbers, “No Time To Die” is the 25th James Bond film, released 59 years after the first installment, starring the sixth actor to play Bond, Daniel Craig, in his fifth and final outing as the dashing MI6 super-spy. It runs a beefy 2 hours and 43 minutes, and the film’s release was postponed three times by the COVID-19 pandemic. The number of 007s in the movie is two, a declaration that “No Time to Die” delivers everything you could want, and more, from a Bond movie.
MOVIES・10 DAYS AGO
WSVN-TV

It’s been 3,217 years since the latest James Bond movie was supposed to get released. “No Time To Die” is Daniel Craig’s last 007 film, and we’re already so sad. For more, let’s hit Alex Miranda, the man who does his best work undercovers. It’s Miranda, Alex Miranda. Daniel Craig...
MOVIES・10 DAYS AGO
Fox News

Daniel Craig opens up about iconic last performance as James Bond: 'It's time to finish'

Daniel Craig is opening up about his final performance as James Bond in "No Time To Die." Craig, 53, appeared on "Good Morning America" on Tuesday morning where he discussed the big happenings in his life as of late: playing the iconic British spy one last time, getting a star on the Hollywood Walk of Fame and becoming an honorary commander in the Royal Navy.
CELEBRITIES・10 DAYS AGO
COMICBOOKMOVIE.com

No Time to Die has started rolling out in theaters across the globe, and all eyes are on how Daniel Craig's tenure as 007 ends. James Bond has never died on screen, but occasionally receives what some might describe as a happy ending. A lot has changed since the days...
MOVIES・13 DAYS AGO
Vail Daily

The Movie Guru: “No Time to Die” an epic goodbye to Daniel Craig’s Bond

It’s hard to say goodbye. It’s even harder to do something new with a nearly 60-year-old character. “No Time to Die,” the latest entry in the James Bond franchise, manages to do both. Opening in theaters this weekend after a two-year delay, the movie rewards fans’ long wait with an intense, emotional final bow for Daniel Craig’s Bond. It ties together threads reaching all the way back to Craig’s first outing, 2006’s “Casino Royale,” while deftly unending some of the character’s most well-known cliches. With all that there are a few elements that do get shoved to the side, but overall it’s a fitting, hopefully game-changing entry in an iconic series.
MOVIES・7 DAYS AGO
WSVN-TV

‘No Time to Die’ premiere party held in downtown Miami, as stars weigh in on Daniel Craig’s final Bond outing

It’s finally here! “No Time to Die” hits theaters this weekend. It is the last time you’ll see Daniel Craig as James Bond, but at the fabulous South Florida premiere in Downtown Miami, we were way too distracted by the 007 look-alike, and the shaken-not-stirred martini bar, to worry about it.
MIAMI, FL・8 DAYS AGO