Bill Belichick May Have Outsmarted Everyone Again 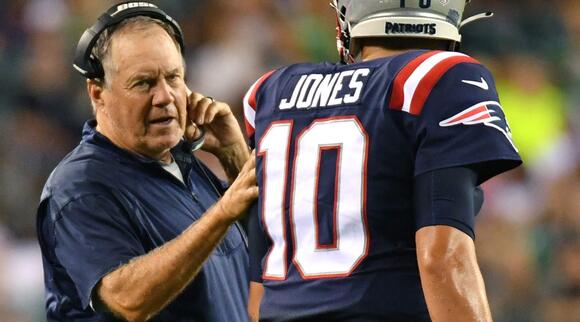 The Patriots are now all-in on Mac Jones, and they may have found a potential star hiding in plain sight.

Bill Belichick is probably right, because Bill Belichick is usually right, and so we should pause now to ponder what it means if he is. Belichick just stuffed the rest of his career into Mac Jones’s pocket, just four months after Jones was the fifth quarterback taken in the draft. We are left with the astounding but increasingly likely possibility that Belichick outsmarted the league yet again.

The Patriots might have found a star hiding in plain sight: a national-championship winning, All-America quarterback at the nation’s most successful college program. We’ll see how Jones does—next week, next month, next year. But if he excels, I would not want to be the general manager who has to explain how I missed on that guy.

Maybe Belichick is wrong. But if he’s right, he will be right because of a concept that is very simple yet still gets lost sometimes: Playing quarterback in the NFL is primarily about figuring out where the ball should go and getting it there. Arm strength, foot speed, athleticism, work ethic and the ability to read defenses are all just factors that help a quarterback accomplish that task.

Now go back to last spring. So much of the predraft talk was about Ohio State quarterback Justin Fields and whether he would “drop” in the draft . Fields put up great numbers for the Buckeyes and won a ton. He is a phenomenal athlete: great arm, fast runner, incredibly tough. There were questions about his ability to go to his second read, which were refuted by those who said he actually went to his second read frequently. But the question was not whether Fields could do it; it was how quickly he could do it. It requires a specific kind of intelligence—the ability to process and react in less than one second. Some people who are brilliant in many areas of life would struggle with it; others, who struggle in school and show very little intellectual curiosity, excel at it.

Behind a fantastic line at Ohio State, with NFL talent at receiver, Fields had plenty of time to find open targets. That won’t be the case in the NFL. Maybe he will show he can do it. But Belichick would’ve had to move up only four spots in the draft to get Fields, and there are no indications he tried.

He waited for Jones instead. Belichick is not the type to share all his reasons for that, but we don’t need to know all those reasons to know this: He believed in Jones’s ability to figure out where the ball should go and get it there.

Belichick’s genius takes many forms. But it only takes those forms because he has so much trust in himself. He believes in what he sees, no matter what anybody else thinks or how it looks on the outside. Trusted advisers like Jones’s coach at Alabama, Nick Saban, can help shape Belichick’s decisions, but the media narrative almost never does.

New England’s offense can bring out the best in Jones, but Jones can also bring out the best in the offense. Belichick can drastically change game plans each week because Jones can handle it. The Patriots’ free-agent shopping spree last winter will also look different if the starting quarterback during the duration of those deals is on a rookie contract.

The game has changed, and coaches are much smarter about using running quarterbacks. There is more room for quarterbacks with more varied skill sets, which is great and makes the game more entertaining. But the primary task has not changed.

Brady is great largely because of two traits that help him complete that task: He maintains his poise when he is about to get hit, and he moves his feet just well enough to buy himself time. His 40-yard-dash time has never mattered. I am not comparing Jones with Brady; I am comparing Belichick with Belichick. He saw what made Brady special before almost anybody else. He kept him on the roster as a rookie and believed in him when he got a chance to start. Now he trusts what he sees in Jones. Belichick scouted him, he waited for him, he picked him, he made him earn the job, and now he is ready to roll—this season, and beyond. Maybe Belichick is wrong. But I wouldn’t bet on it.

• Mac Won the Starting Job; No Sense to Keep Cam as Backup
• Predicting Every Game of the 2021 Season
• How Derrick Henry Handles a Throwback Workload
• An Early Look at the 2022 NFL Quarterback Carousel

The Buccaneers wild win over the Patriots on Sunday didn't just allow Tom Brady to get revenge on his old team, the victory also allowed Brady to enter a very exclusive club. Thanks to the victory, Brady is now just the fourth quarterback in NFL history to defeat all 32 teams, joining Peyton Manning, Drew Brees and Brett Favre.
NFL・20 DAYS AGO
FanSided

A lucky Bucs fan ended up with Tom Brady’s 600th career touchdown pass during the game against the Bears. What did Tampa give him to give it up?. Tom Brady has thrown a ton of valuable touchdown passes in his career. His second one on Sunday was particularly special. The...
NFL・1 DAY AGO
ClutchPoints

A lot has been said about Tom Brady and Bill Belichick’s strained relationship since the former left the New England Patriots in 2020 to join the Tampa Bay Buccaneers. Despite all the negative talks, however, Brady has nothing but love for his ex-coach. After the Buccaneers beat the Patriots on...
NFL・20 DAYS AGO
E! News

Watch: 10 of Tom Brady & Gisele Bundchen's Hottest Red Carpet Looks. Tom Brady had a big day as he led the Tampa Bay Buccaneers to another win, but nothing compared to a chat he shared with his son following the game. On Sunday, Oct. 10, after the 44-year-old star...
NFL・15 DAYS AGO

BOSTON (CBS) — Tom Brady is 44 years old. He can certainly speak for himself. That being said, Tom Brady Sr. is still a father. And a father is always going to have his son’s back. He may even hold grudges against anyone who’s perceived to have crossed his child.
NFL・27 DAYS AGO
The Spun

Tom Brady reached another major milestone on Sunday afternoon against the Chicago Bears. He became the first quarterback ever to throw 600 touchdown passes. The historic moment came late in the first quarter when he rifled in a nine-yard pass to Mike Evans. The Tampa Bay Buccaneers wide receiver made the catch to give his team a 21-0 advantage and Brady another huge resume boost.
NFL・1 DAY AGO
SheKnows

It was game day for two proud NFL teams yesterday, and fans far and wide came out to support the New England Patriots and the Tampa Bay Buccaneers. Among those dedicated fans was Tom Brady’s wife Gisele Bündchen and the couple’s two kids — 11-year-old son Benjamin Brady and 8-year-old daughter Vivan Lake Brady. As the game carried on, the longtime model posted a selfie to Instagram featuring her two kids, and we couldn’t get over how much Vivian looked just like her mom!
NFL・22 DAYS AGO
Insider

Bill Belichick was a very happy man on Sunday. The New England Patriots rebounded from their overtime loss to the Dallas Cowboys by blowing out the New York Jets on Sunday afternoon. New England topped New York, 54-13, in one of the biggest blowouts of the NFL’s season to date....
NFL・1 DAY AGO
Sports Illustrated

Bucs Fan Who Returned Tom Brady's Ball Has One Request

This is the perfect ask and Tom should totally do it.
NFL・16 HOURS AGO
The Spun

Tampa Bay Buccaneers quarterback Tom Brady seems to be doing just fine in the Sunshine State, but it turns out there’s one thing he dislikes about his new home. On Saturday afternoon, Brady tweeted “Missing the fall this year.”. Brady spent roughly two decades in Massachusetts, so he certainly got...
NFL・9 DAYS AGO

The couple's tweets over the weekend had plenty of users speculating.
NFL・8 DAYS AGO
New York Post

Trouble in paradise, or the grumblings of an annoyed co-worker?. A new book, “It’s Better to Be Feared” by ESPN writer Seth Wickersham, explores the Patriots dynasty through hundreds of sources and interviews that reveal the secretive inner workings of the team from 2001-19. The book suggests the relationship between owner Robert Kraft and head coach Bill Belichick may not be particularly rosy.
NFL・27 DAYS AGO
Larry Brown Sports

A Tampa Bay Buccaneers fan briefly found himself in possession of an incredibly valuable piece of memorabilia on Sunday, and the team has promised to reward him for giving it back. Mike Evans caught a touchdown pass from Tom Brady in the first half of Tampa Bay’s game against the...
NFL・1 DAY AGO

For being as famous and successful as he is, Bill Belichick remains something of a man of mystery. The way that he deflects and withholds during press conferences is an artform and rare is the interview where he divulges very much about what makes him tick. Still, the six-time Super Bowl champion remains a person that many people want to get to know better, especially Boston-area Patriots fans.
NFL・22 HOURS AGO
E! News

Watch: 10 of Tom Brady & Gisele Bundchen's Hottest Red Carpet Looks. Tom Brady is a three-time NFL MVP, and if you ask his son Jack, it also sounds like he just might be a contender for Best Dad Ever. On Monday, Oct. 11, the 44-year-old Tampa Bay Buccaneers quarterback...
NFL・13 DAYS AGO
NESN

FOXBORO, Mass. — After nearly leading the New England Patriots to an unlikely victory Sunday night, Mac Jones met his predecessor, Tom Brady, at midfield. Their interaction was brief, a quick exchange of congratulations and well-wishes. Jones said Brady left him with a simple message. “He just told me to...
NFL・22 DAYS AGO
WEEI Sports Radio

We know there’s no longer any good situational football to be found at Gillette Stadium. But could the coach at least get a towel?. On “The Greg Hill Show” Monday, Belichick was asked about his concerning wounds. “I’ll be alright,” he said, before lapsing into his trademark awkward silence. This...
NFL・8 DAYS AGO