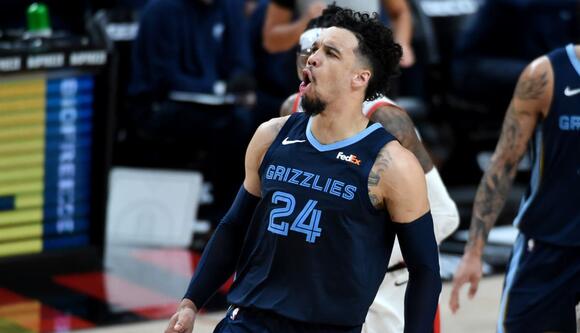 According to Shams Charania of The Athletic, Portland had interest in trading for Dillon Brooks before acquiring Larry Nance.

In a different world, one of Portland's foremost opposing agitators could have been wearing a Trail Blazers jersey for the foreseeable future.

According to Shams Charania of The Athletic , Portland showed interest in trading for Dillon Brooks before acquiring Larry Nance Jr. last week.

Multiple reports have surfaced recently indicating that the Memphis Grizzlies would be willing to move on from Brooks or Kyle Anderson, both coming off career-best seasons, if the price was right. The Cleveland Cavaliers reportedly sniffed around trading for either player prior to bringing in Lauri Markkanen in the three-team swap that sent Nance to Portland.

Brooks, 25, cemented himself as one of basketball's best individual defenders on the perimeter in 2020-21 while also taking more subtle strides as a self-created scorer. Though still overtaxed offensively for a Grizzlies team that needs scoring punch on the wing, playing next to Damian Lillard and C.J. McCollum at least theoretically would've allowed Brooks to settle into his ideal role as point-of-attack stopper and tertiary playmaker.

Due to the composition of Portland's roster, Nance is a far better fit than Brooks irrespective of the front office's preference between the two. Maybe the Grizzlies asked for more than the Blazers were willing to give up in a prospective Brooks trade, not unlike the failed pursuit of Markkanen that ultimately brought Nance to Rip City.

Either way, it speaks to the highly competitive nature of Lillard, specifically, that Neil Olshey reportedly had eyes for Brooks. Do these look like two players who would relish being teammates?

Lillard's competitive spirit has never been a question, and he's more invested than ever in winning at the highest level . Brooks, meanwhile, tasted postseason basketball for the first time last season against the Utah Jazz, his unrelenting fire and intensity translating to the best basketball of his life.

Lillard and Brooks definitely would've found a way to peacefully coexist in Portland, likely even thriving. Blazers fans, though, definitely won't mind having Brooks as the heel when the Grizzlies come to town this season, either.

Former Cleveland Cavaliers forward Richard Jefferson commented in a series of tweets on the likely suspension of Boston Celtics head coach Ime Udoka for a relationship with a female team staffer. Jefferson’s confusion on the suspension is because the expected length will be a full year when the final decision...
BOSTON, MA・2 DAYS AGO
Sportsnaut