Larry Nance Opens Up About Blazers Trade in Farewell to Cavs 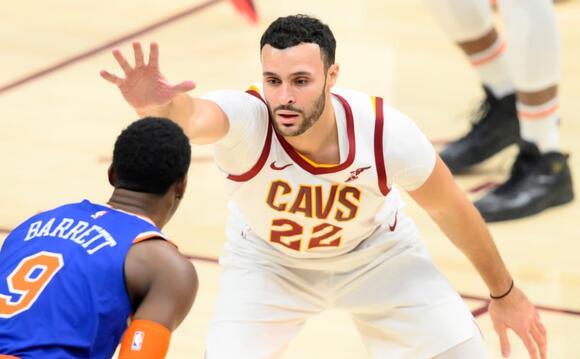 An emotional, excited Larry Nance revealed the genesis of his trade to the Blazers in a farewell letter to Cleveland.

Not every NBA player dreams of playing for the Cleveland Cavaliers. But Larry Nance Jr., acquired by the Trail Blazers on Friday in a three-team trade, has a history with the wine and gold that's unique to him alone.

Born in nearby Akron on New Year's Day 1993 during his high-flying father's penultimate season with the Cavaliers, Nance spent all of his childhood and adolescence in Northeast Ohio. After graduating from Richfield's Revere High School, the underrecruited Nance headed west for college at Wyoming before being selected by the Los Angeles Lakers in the late first round of the 2015 draft.

Three years later, with LeBron James back chasing titles in Cleveland, Nance went back home, too, in a trade to the Cavaliers that he says was "the best thing that could've happened to both me, and my entire family."

In fact, as Nance wrote in a heartfelt farewell to the Cavaliers and their fans at Cleveland.com, he and his representation worked in concert with Cavaliers GM Koby Altman to find Nance a trade destination he sought.

"This trade was absolutely a collaboration. I had expressed my desire to win now to Koby and the front office if we could find a deal that helped everyone, and they certainly did that."

"This is a win/win for both sides,” he told Terry Pluto of Cleveland.com . “Larry is excited and a little heartbroken at the same time because of his attachment to Cleveland. But at this stage of his career, this is the right move for Larry to make."

Nance's desire to be traded obviously wasn't about getting out of Cleveland or any wavering belief in the team's ongoing, arduous rebuild. He glowed about the Cavs' young talent, predicting a core led by Darius Garland and Evan Mobley, the third overall pick in the 2021 draft, will soon be a "problem" for the rest of the Eastern Conference.

Nance, 28, is simply at the point of his career where winning is most important—and he believes Portland is the place to do it.

"Going to Portland is something that I am extremely excited about. This is a team that has seen the biggest stages and is hungry for more, and I'm thrilled that they believe I can help them climb higher. This opportunity is one that I'm very ready to take advantage of and I have the Cavs to thank for preparing me for it."

READ MORE: Portland is Much Better Off With Larry Nance Than Lauri Markkanen

It can be argued that the off-court ventures of Los Angeles Lakers star LeBron James are just as successful if not more than what he has accomplished on the basketball court. And now he is teaming with a pair of NBA All-Stars for his latest. LRMR Ventures, the family office...
LOS ANGELES, CA・2 DAYS AGO