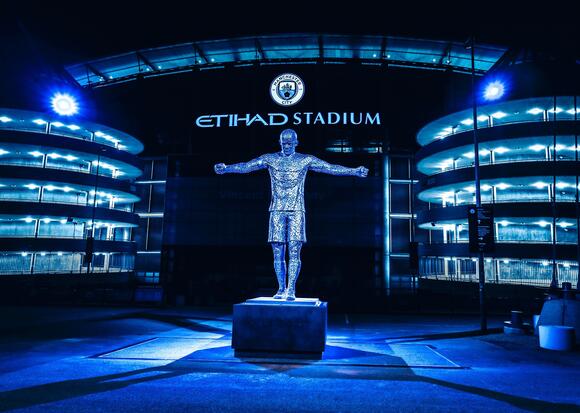 Kompany played for City for 11 seasons, captaining them for eight and leading the club to their first top-flight title for 44 years when they won the Premier League in 2011-12.

Silva, a world and European champion with Spain, also added a fifth EFL Cup in 2019-20.

The statues, which will be illuminated by blue-tinted lighting at night, were created by award-winning sculptor Andy Scott and have been constructed using thousands of welded pieces of galvanised steel.

“I didn’t really expect to be recognised by such a great club in that way,” Kompany told the club’s website.

“The first time I saw the statue I couldn’t believe how big it was, but then again, I’m a big boy, so fair enough! And then especially the pose, for me it means a lot.”

“Being at City changed my life. I’m proud of what we did together and I feel emotional that it has been recognised like this,” said Silva, whose statue captures the midfielder with his foot on the ball and looking up.

“When I first saw the statue, I felt good, I thought it was like me. This statue really represents the way I like to play, I love the pose the sculptor has chosen.

“It really reminds me of those times I was on the pitch playing and that moment when I had to find the striker.”

A third statue – of record goalscorer Sergio Aguero – is set to join the existing two next year.

West Ham boss David Moyes believes his side are showing signs of getting back to their best after a 1-0 Europa Conference League win at Anderlecht.The Hammers saw Gianluca Scamacca climb off the bench to score the winner in the 79th minute and put them in firm control of Group B.The £35million signing did the damage nine minutes after coming on, but the Hammers could have had it wrapped up long before then in Belgium.Moyes’ side have looked a shadow of the team who almost finished in the Premier League’s top six last season so far this term, but, building...
PREMIER LEAGUE・7 HOURS AGO
The Independent

Mikel Arteta was satisfied with a comfortable win and a clean sheet as he gave his fringe players a much-needed run-out in the Europa League.Eddie Nketiah, Rob Holding and Fabio Vieira fired much-changed Arsenal to a routine 3-0 victory over Norwegian champions Bodo/Glimt.Nketiah, yet to start in the Premier League this season, grabbed his second goal in two European appearances.Then defender Holding, who has been on the pitch for just two minutes in the league this term, headed a second before Vieira tapped in a late third to make it two wins from two in Group A.It was a ninth...
PREMIER LEAGUE・7 HOURS AGO
The Independent

Erik ten Hag praised his substitutes after Marcus Rashford scored two and set up fellow introduction Anthony Martial as Manchester United escaped a scare at Omonia Nicosia in the Europa League.Wounded by Sunday’s 6-3 derby defeat at Manchester City, the Red Devils were stung in Cyprus after making a strong start as the hosts capitalised on lax defending to go ahead through Karim Ansarifard.Omonia scored after Tyrell Malacia was dispossessed having collected a pass from ineffective Jadon Sancho following a clear free-kick, with Ten Hag replacing them with Luke Shaw and Rashford at half-time.The latter would go on to score...
PREMIER LEAGUE・7 HOURS AGO
The Independent

Wales beat Bosnia and Herzegovina 1-0 on a tense night in Cardiff to advance to the next Women’s World Cup play-off stage.Jess Fishlock struck an extra-time winner by superbly volleying home Rachel Rowe’s cross after 105 minutes and sending a record 15,200 crowd wild.It capped an extraordinary few days for Fishlock, who won the NWSL Shield with her Seattle-based club OL Reign last weekend, as Wales’ place in the next round was secured.Wales will now play in Switzerland on Tuesday ahead of a potential inter-continental play-off in February to determine qualification for next summer’s finals in Australia and New Zealand.Gemma...
FIFA・7 HOURS AGO

At least one person died while police clashed with soccer fans trying to push into an Argentine league match Thursday night, and the referee stopped the game as clouds of tear gas spread inside the stadium.Authorities and witnesses said fans of the home team, Gimnasia y Esgrima, struggled to enter an already full stadium, and police fired rubber bullets and tear gas trying to get the crowd to retreat.The incident came less than a week after the use of tear gas outside a soccer match in Indonesia set off a stampede that left 131 people dead.Nine minutes into Thursday...
FIFA・1 HOUR AGO
The Independent

Substitute Abi Harrison sent Scotland one step closer to the Women’s World Cup finals with an extra-time winner against Austria.Bristol City forward Harrison headed home Erin Cuthbert’s corner from six yards in the 92nd minute of the first-round play-off at Hampden and Scotland held on for a 1-0 victory.The win sets up another Hampden clash next Tuesday against the Republic of Ireland in one of three European second-round play-offs.The two top-ranked winners – based on their record in the qualifying groups – will go into next year’s finals in Australia and New Zealand. The other will enter a 10-team inter-continental...
SPORTS・7 HOURS AGO