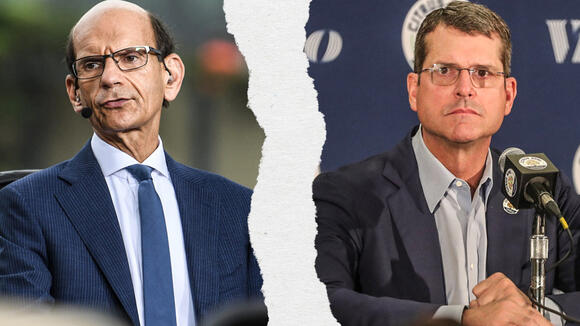 As the world of college continues to change and evolve, Paul Finebaum appears determined to remain the same.

On Friday, Finebaum continued his routine of bashing Jim Harbaugh at every opportunity. Appearing on an episode of Keyshawn, JWill and Zubin, Finebaum once again launched into tirade regarding Harbaugh's tenure at the University of Michigan.

“They just ought to go ahead and fire (Harbaugh) today and save the agony of waiting till November,” said Finebaum. “Michigan manages its football program like an art museum. They don't look at it the way the rest of us do, that you actually have to win and beat your rival. What they did was cut his contract and that will almost make it apparent that he'll probably lose his job after this year. And I know what we all said about Harbaugh five, six, seven years ago and when he was a Super Bowl coach and a championship coach in the NFL, but he's been an abject disaster in Michigan.

After suggesting that the University of Michigan should preemptively fire Jim Harbaugh now, Finebaum went on predict that 2021 will be Harbaugh's final year in Ann Arbor.

“He was the most heralded hire other than Urban Meyer of the last probably eight or nine years in college football. And I just, I'm not really sure what he's done and he shouldn't have been retained. He was, but the question wasn't should he have been retained, the question you asked me is will he be back next year and the answer is no.”

Though harsh, Finebaum's assessment of Harbaugh's tenure to date isn't all that inaccurate. In fact, most Michigan fans would likely agree with the general premise of the argument Finebaum is making - that Harbaugh's coaching career at Michigan has been a huge disappointment so far.

The problem, however, is that Finebaum's schtick of trashing Harbaugh has become borderline obsessive and odd. In an interview last week, he went as far as to say that Harbaugh makes him sick.

“I don’t know if you can come up with a vomit emoji very quickly in the spur of the moment, but he makes me sick because he shouldn’t be coaching,” Finebaum said when asked to describe Harbaugh. “Yeah, this guy should have been fired last year. If we do our job as poorly as Jim Harbaugh has done his, we’re gone - It’s not even a debate, it’s not even, ‘Hey, would you come into my office and let’s have a conversation.' It’s they throw you out in the parking lot.

“But somehow, some way, this guy, who I think is a complete fraud, is a major head coach. He’s making six or seven or eight million dollars a year although I think they cut his salary last year. He’s still there. He can’t beat his rival. He really quite frankly can’t beat even the middle of the pack in the Big Ten.”

With the kick off of the 2021 season just over one week away, it's a pretty safe bet that we'll be hearing plenty more from Mr. Finebaum on the topic of Jim Harbaugh and the Michigan Wolverines.

I’m a Michigan fan and I can’t disagree with anything he said! It’s going to be another long football season in A2.

This reporter always has something negative to say about anyone outside the SEC, or are not televised by ESPN. No credibility.

I hope Harbaugh gets a contract extension. He's great entertainment for Buckeye fans.

LINCOLN, Neb. — On Saturday at Nebraska, Michigan football head coach Jim Harbaugh was fired up in a way we haven’t seen since 2016. Immediately after the Huskers scored their first touchdown of the game in the early moments of the second half, Harbaugh was on the sidelines yelling at the referees. That used to be a normal in-game practice, but after his antics cost the Wolverines against Ohio State in 2016, he has tempered his behavior. However, on Saturday, Harbaugh would not be quiet about what he was seeing out on the field.
NEBRASKA STATE・7 DAYS AGO
The Spun

Week 6 of the 2021 college football season was by far the craziest of the year thus far, as Saturday’s slate featured multiple shocking outcomes. The No. 1, No. 4 and No. 10 teams in the country all lost, while a handful of the nation’s other top programs were pushed to the brink.
COLLEGE SPORTS・6 DAYS AGO
On3.com

Florida’s Week 5 loss to Kentucky is a big blow to its hopes of making a run in the SEC this season. Kentucky came away with the 20-13 victory, although Florida had a chance inside Kentucky’s five-yard line in the final minute of the game. ESPN’s Paul Finebaum blames Florida’s loss on head coach Dan Mullen, citing bad play calling in key situations.
COLLEGE SPORTS・13 DAYS AGO
WolverineDigest

If you're a sports fan and you hear the name 'Urban Meyer', you're initial thoughts are likely one of two things. The first thing you might think of is the fact that Meyer is hands down one of the all-time greatest head coaches in college football history. Among all Power Five coaches with at least 100 wins, Meyer ranks third in winning percentage all-time at .853 - just behind two former Notre Dame head coaches Knute Rockne (.881) and Frank Leahy (.864).
NFL・8 DAYS AGO

Every college football season is filled with surprises, but the SEC has been the center of some of the most noteworthy chaos this season. Both Texas A&M and Florida are 3-2 and both have been eliminated from SEC Championship contention barring mass chaos at the top. On Monday, ESPN’s Paul...
COLLEGE SPORTS・10 DAYS AGO
Detroit Sports Nation

Michigan head coach Jim Harbaugh believes that if Nebraska would have been able to defeat the No. 9 Wolverines on Saturday night, that Cornhuskers fans would have stormed the field to tear down the goal posts. Following the game, Harbaugh spoke to the media about his defense and said the...
MICHIGAN STATE・7 DAYS AGO
saturdaytradition.com

Jim Harbaugh’s enthusiasm could not be contained on Saturday night. After Michigan escaped Lincoln with a 32-29 victory over Nebraska, the leader of the Wolverines couldn’t help but celebrate. Harbaugh rushed to the center of the field to shake Scott Frost’s hand after Michigan’s victory. It was a short midfield...
MICHIGAN STATE・7 DAYS AGO
The Spun

Jim Harbaugh hasn’t had much success coaching the Michigan Wolverines while being an underdog. That changed on Saturday afternoon. For the first time coaching the Wolverines, Harbaugh has won a game as an underdog. Michigan did it in convincing fashion by beating Wisconsin 38-17 in Madison on Saturday afternoon. Perhaps...
MICHIGAN STATE・14 DAYS AGO

LSU dropped another one this season when they lost 24-19 to No. 18 Auburn on Saturday night. At home, it was a bad loss for Ed Orgeron’s squad, giving up 14 points in the fourth quarter and ESPN analyst Paul Finebaum is worried. There was already heat on Orgeron coming...
COLLEGE SPORTS・13 DAYS AGO
On3.com

Paul Finebaum is kicking himself for a bold prediction he made leading into the 2021 college football season. Week 6’s slate of games was supposed to be headlined by Texas A&M hosting the Alabama Crimson Tide, but the Aggies’ pedestrian 3-2 record after five games has ruined the hype. “When...
COLLEGE SPORTS・13 DAYS AGO
chatsports.com

Jim Harbaugh on J.J. McCarthy: “Try to get him in there as much as we can”

Five-star freshman J.J. McCarthy received playing time in the second half against Wisconsin. The decision paid off for head coach Jim Harbaugh, who threw McCarthy into the fire with Michigan up just 13-10 on the road against Wisconsin in a loud environment. McCarthy was initially used in the game to try and attack the edge of the defense via read-option runs.
COLLEGE SPORTS・14 DAYS AGO
saturdaydownsouth.com

Alabama’s loss Saturday night to Texas A&M may have exposed the Crimson Tide for something they may have to contend with down the stretch of the schedule — a team playing better than the Aggies were heading into Saturday. That’s the opinion of SEC Network host Paul Finebaum, who shared...
ALABAMA STATE・5 DAYS AGO

Jim Harbaugh was pumped up about his Michigan squad defeating Nebraska on Saturday night, but he wasn’t so excited about doing a postgame interview. Harbaugh’s Wolverines kicked a field goal with 1:24 left to take a 32-29 lead over the Huskers. They eventually got a stop on fourth down to seal things and just ran out the clock to win the game.
COLLEGE SPORTS・7 DAYS AGO
The Spun

Jim Harbaugh has the Michigan Wolverines rolling this year. Michigan is off to a 5-0 start on the regular season. The No. 14 Wolverines demolished Wisconsin on Saturday, 38-17. Harbaugh’s program has looked like arguably the top program in the conference so far this season. Of course, one game is...
COLLEGE SPORTS・14 DAYS AGO
WXYZ Detroit - 7 Action News

Jim Harbaugh one-on-one: Breaking down the win over Wisconsin, 'Jump Around' celebration, and the path ahead

Jim Harbaugh and Michigan left Madison with a win over Wisconsin, leaping into the Top 10 of both the AP and coaches' polls.
WISCONSIN STATE・12 DAYS AGO
247Sports

Everything Jim Harbaugh told the media after Michigan's win over Wisconsin

MADISON, Wisc. — Michigan has finally snapped its losing streak at Camp Randall with a 38-17 victory over Wisconsin on Saturday. The win was a major boost for the program after the Badgers have rattled off two-straight blowout victories over the Wolverines in the previous two meetings. After the game,...
MICHIGAN STATE・14 DAYS AGO
chatsports.com

Jacksonville Jaguars coach Urban Meyer is on the hot seat after video of him with a dancing woman at a bar in Ohio surfaced earlier this week. The hot topic in sports today is whether or not the Jaguars should part ways with Meyer. Paul Finebaum didn’t hold back on...
NFL・11 DAYS AGO
On3.com

Tim Tebow fires back at Paul Finebaum's criticism of Clemson

Clemson has seen major struggles to begin the 2021 season. The Tigers are 2-2 on the year after a double overtime loss to a quality NC State team in Week 4. Clemson’s offense has not been good to start the year, and that resulted in ESPN’s Paul Finebaum laying into Clemson’s struggles, going as far to say as the Dabo Swinney dynasty is over.
CLEMSON, SC・15 DAYS AGO
The Ann Arbor News

MADISON, Wis. — The mood inside the Michigan locker room Saturday afternoon, as you might imagine, was full of jubilation. You could hear screaming, the team chanting its iconic fight song and an overwhelming sense of accomplishment following the Wolverines’ 38-17 win over Wisconsin. The win not only moved 14th-ranked...
MADISON, WI・14 DAYS AGO
Detroit Free Press

Follow along with us during Michigan football coach Jim Harbaugh's weekly news conference at noon Monday. Michigan (5-0, 2-0 Big Ten) leapt up six spots to No. 8 in the latest USA TODAY Sports AFCA Coaches Poll after its 38-17 beatdown of Wisconsin. The Wolverines visit Nebraska this Saturday (7:30...
MICHIGAN STATE・12 DAYS AGO