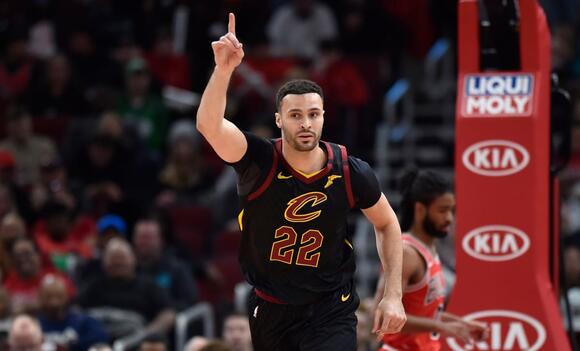 The Blazers have acquired Larry Nance Jr. in exchange for Derrick Jones Jr. and a protected first-round pick, per ESPN.

About seven weeks out from tipoff of the regular season, the Trail Blazers have suddenly answered many rippling questions about their overall lack of size, quality depth at forward and lagging lineup versatility.

Portland acquired veteran forward Larry Nance Jr. from the Cleveland Cavaliers on Friday in exchange for Derrick Jones Jr. and a protected first-round pick, according to ESPN's Adrian Wojnarowski .

The deal is part of a three-team trade with the Chicago Bulls that sends Lauri Markkanen to Cleveland via sign-and-trade. The Bulls receive Jones and Portland's 2022 first-rounder, protected through the lottery until 2028. If the pick still hasn'y conveyed to Chicago by then, the Blazers will send a 2028 second-rounder to the Windy City.

Though Markkanen is the headliner in this trade and a previous prospective trade target for Portland, the acquisition of Nance makes much more sense for Neil Olshey. Not only would the Blazers have vaulted deep into the luxury tax this season and committed more long-term money to their books by signing-and-trading for Markkanen, but his game doesn't align with the roster weaknesses Portland needed to fortify.

Nance's does, obviously, and he's signed to an extremely reasonable contract through 2022-23 that descends from $10.6 million this season to $9.6 million a year from now. Swapping Jones for Nance also adds less than a million dollars in committed salary for the Blazers, keeping Jody Allen's luxury tax bill at an extremely reasonable $2.05 million.

But far more important for Portland than any negligible financial parameters here is the significant upgrade Nance represents on Jones. That reality will be most readily reflected offensively, where Nance's strides as a spot-up shooter and innate ancillary playmaking ability afford the Blazers some much-needed variability.

Nance is hardly a knockdown shooter, connecting on roughly 36 percent of his catch-and-shoot threes each of the last three seasons, per NBA.com/stats . He's not an off-dribble threat from deep nor the type of movement shooter who flies around screens and is comfortable launching from multiple angles, either. But Nance's three-point rate has more than doubled since he added the long ball to his game in 2018-19, and unlike Jones, defenses will have to pay him some measure of respect when he's spotting up above the break.

More easily overlooked yet nearly as significant are Nance's exploits as a short-roll playmaker and overall connector with the pass.

Chauncey Billups has preached offensive tenets of ball and player movement, downhill attacking and going from "good" shots to "great" ones since taking the reins in Portland. Jones, nor any of the Blazers' remaining incumbent wings and forwards, embody those ideals with the precision and consistency of Nance.

Jones obviously doesn't have the passing chops and overall offensive feel to make these plays seem routine, but neither do Robert Covington or Nassir Little.

Jusuf Nurkic is no longer Portland's only interior player who can facilitate offense and adds clear value with the pass. Even little doses of dynamism like below will make a difference on the margins for Portland.

As much as he'll make life easier for the Blazers offensively, it's the other side of the floor where Nance's presence is poised to loom largest.

In he and Covington, Portland has two of the most disruptive forwards in basketball. Nance's 3.4 deflections per game ranked sixth last season, four spots behind Covington. The Cavaliers' opponent turnover rate was 3.3 percent higher with him on the floor, per Cleaning the Glass , the driving force behind his -9.3 net defensive rating—a number that ranked in the 97th percentile league-wide.

Perhaps most crucially, Nance unlocks downsized lineups that the Blazers previously would have been hesitant to put on the floor against elite competition. Portland's inherent size issues on the perimeter will always limit the defensive ceiling of those groups, but at least Nance—at 6-foot-7, 245 pounds with a 7-foot-1 wingspan—gives Billups a viable small-ball frontcourt alongside Covington.

Nance's ability to switch across multiple positions and threaten defenses from multiple spots on the floor means the Blazers could at times go bigger while playing small, too, swapping Little for Norman Powell. That newfound sense of lineup versatility and overall depth extends to more traditional units. Nance's injury history presents its own problems, but at least Portland now has another two-way big to sop up minutes when Jusuf Nurkic or Cody Zeller is inevitably sidelined.

Bottom line, there just isn't real downside to this trade for the Blazers.

Even surrendering a first-round pick isn't much of an opportunity cost given Olshey's clear reluctance to shop C.J. McCollum this season. Barring disaster, that pick is bound to convey to Chicago next summer, allowing Portland to avoid Stepien Rule complications in any potential future moves down the line.

There's some evidence of athletic decline with Nance, no doubt precipitated by his checkered injury history. But he's still in the thick of his prime at 28, and Nance's game has shifted to a more cerebral one after entering the league a half-decade ago as a highlight-reel high-flier, just like his dad. Any decrease in vertical pop Nance more than made up for last season with improved foot speed defensively, too.

No one is suggesting Nance moves Portland's championship needle. Only an All-Star forward would meet the gravity of Lillard's call for a title-worthy supporting cast. But Nance undoubtedly makes the Blazers better, plugging many of the holes that could have prevented them from winning an additional playoff round or two if team-specific matchups and injury luck break their way.

Considering Lillard's uncertain status and Portland's limited means of team-building, Olshey and the front office would have been hard-pressed to do any better.