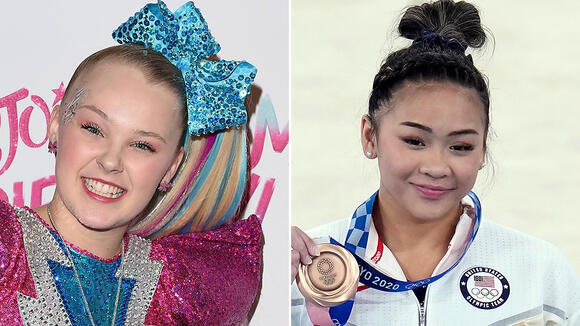 ABC ’s Dancing With the Stars will be breaking new ground in the upcoming 30th season. During a TCA panel for the show Thursday, host Tyra Banks and executive producer Andrew Llinares revealed that the new season will feature a same-sex partnership for the first time in DWTS history. Llinares said that JoJo Siwa , who recently came out as a member of the LGBTQ+ community, will be paired with a woman dancer.

Social media personality Siwa earlier in the panel was unveiled as one of the first two celebrity contestants in Season 30, along with Olympic gold medal gymnast Suni Lee . Additional celebrities set to tout their dancing skills (or lack thereof) will be unveiled on Good Morning America on September 8.

“I think it’s cool, i think it breaks a wall that’s never been done before,” Siwa said about being part of Dancing ‘s first same-sex pairing. “I think it’s really special that i get to share wit the world that you can love who you love, but now you can dance with who you want to dance with.”

Lee joins a number of Olympic gymnasts who have strutted their stuff on the Dancing With The Stars stage. Previous DWTS alumni are Simone Biles, Laurie Hernandez and Nastia Liukin. Hernandez was the champion of Season 23 in 2016.

Just last month at the Tokyo Olympics, Lee took home the gold in the women’s all-around and bronze in the uneven bars, while helping lead Team USA to the silver in the team event after Biles’ unexpected exit from the competition. Lee also made history as the first Hmong-American Olympian.

Siwa is an actress, singer and influencer who was named one of Time magazine’s 100 Most Influential People in 2020. She has more 60.5 million followers on social media and over 3.6 billion views on her It’s JoJo Siwa YouTube channel.

This post contains spoilers for the latest episode of Dancing With the Stars Season 30. Dancing With The Stars named its newest Mirror Ball champion on Monday night in a night of freestyle dances and fierce competition. Out of an original field of 15, the winner of the latest edition of ABC’s hit celebrity dance competition was former NBA player Iman Shumpert and Daniella Karagach. Shumpert and Karagach outshone the fellow competitors with a routine that combined a cha-cha and a foxtrot. It earned them a perfect score and raves from judge Len Goodman. “Sometimes underdogs bite back, and that’s what you...
THEATER & DANCE・9 DAYS AGO
Deadline

‘Only Murders In The Building’: Cara Delevingne Boards Hulu Comedy Series For Season 2

Cara Delevingne has joined the cast of Hulu’s Only Murders in the Building for Season 2 in a series regular role. Delevingne will star as Alice, a sophisticated art world insider who becomes enmeshed in the mystery. The actress and model stars opposite Orlando Bloom in the Prime Video series Carnival Row. The filming schedule for Only Murders In the Building does not interfere with Carnival Row, which wrapped production on its second season in August, allowing Delevingne to do both streaming series concurrently. She is slated to continue on Prime Video’s fantasy series should it get renewed for a third season. Hulu’s...
TV SERIES・14 HOURS AGO
Deadline

EXCLUSIVE: Lifetime has rounded out cast for both installments of Toni Braxton’s Fallen Angels Murder Club (working title, fka Fallen Angels Book Club), and Angie Harmon’s Barstow (working title) movies. The movies fall under previously signed deals with Braxton and Harmon, in which they will star in and executive produce multiple films for Lifetime. Eddie Cibrian (Northern Lights, CSI Miami) has joined the first installment of Braxton’s Fallen Angels, while Kelly Hu (List of a Lifetime, Scorpion King) joins the cast of the second film. Both films are based on the Hollis Morgan mystery book series by author R. Franklin James. Cibrian...
MOVIES・16 HOURS AGO
hotnewhiphop.com

When an opportunity presents itself, you better take it. This past weekend, Cardi B hosted the American Music Awards and it all went off without a hitch, but one moment that people can't stop laughing about was when the rapper wouldn't stop talking about Jojo Siwa. As Cardi was onstage giving a few shoutouts to her fellow stars, she couldn't help but mention the 18-year-old superstar who happens to boast a global multi-million dollar brand.
CELEBRITIES・9 DAYS AGO

Most Disastrous ‘Dancing With the Stars’ Partners Ever!

Problems in the ballroom — and backstage! Dancing With the Stars has featured some incredible partners over the years, but the ABC competition series is also no stranger to fumbles over mismatched pairings. Kim Kardashian competed on the dance series’ 7th season in 2008 alongside her pro partner, Mark Ballas....
TV SHOWS・8 DAYS AGO
Sioux City Journal

Iman Shumpert and Daniella Karagach won “Dancing with the Stars” Monday night and that’s just as it should be. Considering he came into the competition as an athlete trying to extend his playing time, Shumpert made the greatest leap into another arena. He and Karagach were halting at best during those first weeks. They dug in, figured out how to make their height discrepancy work and emerged as a pair who wowed each time out. Their dances were original, dynamic and filled with tricks others wouldn’t try. When he started lifting her like they were in the weight room, the results were impressive.
TV & VIDEOS・9 DAYS AGO
Hello Magazine

Bruno Tonioli is renowned for his one-liners and sense of humor on the Dancing with the Stars judging panel. But on Monday's final, the professional dancer made a rare personal comment as he praised finalist JoJo Siwa and her dance partner Jenna Johnson on their freestyle performance to Lady Gaga's Born This Way.
THEATER & DANCE・9 DAYS AGO
Popculture

About a month ago, JoJo Siwa broke up with her girlfriend Kylie Prew. Since then, the Dancing With the Stars frontrunner has spoken out about her love life. In a new interview with PEOPLE, Siwa even said that she's on the lookout for a new "cuddle buddy." While chatting with...
RELATIONSHIPS・10 DAYS AGO

JoJo Siwa made a dynamic entrance at the 2021 American Music Awards—simultaneously marking her first time wearing heels on the red carpet. The “Dancing with the Stars” contestant swapped her maximalist aesthetic for classic glamour, arriving in an elegant black gown. The style featured an off-the-shoulder bodice and sheer flowing skirt, accented with layers of ruffles. Her ensemble was compete with delicate gold necklaces, as well as stud earrings and layered rings. The former “Dance Moms” star also wore sparkly gold Christian Louboutin pumps, which featured pointed toes and stiletto heels totaling at least 4 inches in height. Borrowed from Siwa’s “Dancing with the...
MUSIC・10 DAYS AGO
Reality Tea

It was obvious that Dance Moms alum JoJo Siwa was destined for great things. In 2017, the 14-year-old wrote her memoir, and had three more books on the way. When JoJo joined the cast for Season 30 of Dancing with the Stars, she made history. For the first time ever, JoJo was paired with a […] The post JoJo Siwa Is “Grateful Forever” For Friendship With Her Dancing With The Stars Partner Jenna Johnson appeared first on Reality Tea.
CELEBRITIES・2 DAYS AGO
Hello Magazine

JoJo Siwa had a lengthy and heartfelt message for fans in the run-up to the final of Dancing with the Stars. The Dance Moms star took to Instagram and revealed why the show has been so bittersweet for her. JoJo shared the news that just months before she started her...
CELEBRITIES・15 DAYS AGO
ETOnline.com

If you're confused as to why Len Goodman gets the final say about who goes home on Dancing With the Stars, you're note alone — in fact, Derek Hough is on your side. In recent years, the ABC dance competition show has come under fire for becoming a "popularity contest" and rewarding the least-talented dancers for earning the most fan votes. Trying to address these concerns, the show has changed things up to allow judges Len, Derek and Bruno Tonioli and Carrie Ann Inaba to save one of the bottom couples each week. The only thing is, because there's an even number of judges, if Bruno, Carrie Ann or Derek don't all agree, it falls on Len to make the final call.
THEATER & DANCE・20 DAYS AGO
justjaredjr.com

JoJo Siwa and Jenna Johnson took to the ballroom floor for their final performances of the season on Dancing With The Stars on Monday (November 22)!. The duo, who became besties and made history on the show, performed two routines on the season 30 finale. Their first dance was a...
TV SHOWS・10 DAYS AGO
TODAY.com

The 18-year-old pop star and influencer wore a black gown and stilettos as she walked the red carpet at the American Music Awards in Los Angeles on Sunday. "I am in a dress and heels the first time in my life,” she told People. “When I knew I was coming to the AMAs, I was like, 'Oh, what am I gonna wear,' because I have had this transition while being on 'Dancing with the Stars' where I've gone from dressing like I normally dress to looking more adult.”
LOS ANGELES, CA・9 DAYS AGO
KGO

Watch every performance by Suni Lee on ‘Dancing with the Stars’

Suni Lee bid farewell to “Dancing with the Stars” on Monday night, after nine weeks and 13 performances on the ABC reality series. The Olympic medalist and Auburn University student was paired with Sasha Farber on Season 30, and the couple offered some memorable moments on the dance floor. Here’s...
TV SHOWS・14 DAYS AGO
Messenger

Jojo Siwa isn’t ready to start dating again following her split from Kylie Prew, although she admitted she wouldn't mind having a "cuddle buddy".
CELEBRITIES・12 DAYS AGO
Daily Mail

JoJo Siwa describes Demi Lovato as 'the sweetest, nicest, kindest people' after the singer asks Dancing With The Stars fans to vote for the teen

JoJo Siwa has described Demi Lovato as 'one of the sweetest, nicest, kindest, and most supportive people ever.'. The 18-year-old star - who made it to the Dancing With The Stars final on November 15 alongside her pro partner Jenna Johnson after this year's semi-final - was overwhelmed to see her hero posting a message of support on social media to encourage viewers to vote.
THEATER & DANCE・14 DAYS AGO
Extra

“Extra’s” Rachel Lindsay spoke with JoJo Siwa at the 2021 American Music Awards, where she teased what to expect on the finale of “Dancing with the Stars.”. Siwa noted, “No matter what, I’ll be sobbing at the end of the night. If we win, I’m going to be crying happy tears, and if we don’t win, I’m going to be sobbing because it’s over.”
TV SHOWS・9 DAYS AGO