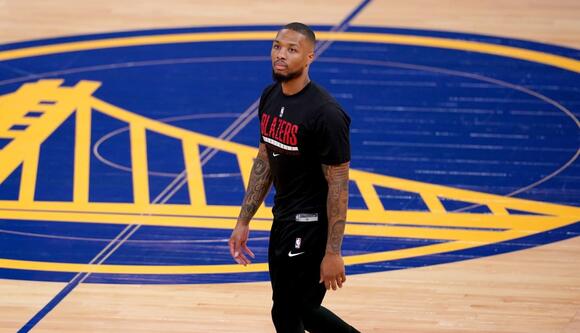 During an Instagram Live chat on Tuesday, Damian Lillard confirmed his uncertain future with the Trail Blazers.

The Trail Blazers' trio of minimum signings in free agency, believe it or not, apparently did little to change Damian Lillard's mind about committing to Portland long-term.

While hosting an Instagram live chat on Tuesday night, Lillard was asked, "Dame, why are you leaving PDX?" Repeating the question, the greatest player in Blazers history then answered it pretty much the same way he has since reports of his frustration with the franchise first surfaced in June.

Though pointedly denying TrueHoop's report of his imminent trade request, Lillard nonetheless confirmed rumors of his newfound discontent with Portland back in mid-July. While admitting he expected to wear a Blazers jersey in 2021-22, Lillard refused to voice the full-throated commitment to Rip City that's long been a hallmark of his competitive mindset.

"I haven't made any firm decision on what my future will be," Lillard said. "There's really no need for anyone else to speak for me."

No subsequent intel into Lillard's thinking alleviated concerns about his potential departure following the upcoming season. In fact, all recent reports have made clear that Lillard intends to play 2021-22 in Portland, affording rookie coach Chauncey Billups a legitimate chance to turn the Blazers around before revisiting a possible trade demand.

Lillard apparently told C.J. McCollum and Norman Powell that his current focus is on winning in Portland next season, too.

But anyone expecting Lillard to have a full-blown change of heart about his future with the Blazers by now was always fooling themselves. Portland did nothing in free agency to meet the sense of urgency he desires from the front office, and there's no indication Neil Olshey tried to make up for it by aggressively canvassing the league for blockbuster trades.

Cody Zeller, Tony Snell and Ben McLemore represent varying degrees of success with minimum contracts, and should shore up some of the weaknesses that plagued the Blazers last season when they went to the bench. But changes on the margins aren't what Lillard asked for, and not what will change his mind.

Lillard revealed nothing new on Tuesday, except that a controversial, underwhelming offseason that's quickly coming to an end hasn't been nearly enough —a reality even the most partisan Portland fans must admit is obvious.