Kansas Reflector is a nonprofit news operation providing in-depth reporting, diverse opinions and daily coverage of state government and politics. This public service is free to readers and other news outlets. Through its opinion section, Kansas Reflector works to amplify voices of people whose lives are affected by public policies but who might typically be left out of public debate. We seek to increase Kansans’ awareness of how decisions made by elected representatives and other public servants affect our day-to-day lives. We hope to empower and inspire greater participation in democracy throughout Kansas. Launched in July 2020, Kansas Reflector is an affiliate of States Newsroom, a national 501(c)(3) nonprofit supported by grants and a coalition of donors and readers. Kansas Reflector retains editorial independence. 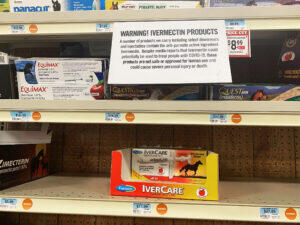 TOPEKA — More people are calling a Kansas poison control hotline after self-medicating for COVID-19 with a drug intended to fight parasitic infections in animals.

Ivermectin can cause severe health problems in humans, and medical experts warn against using the drug to treat or prevent COVID-19 . Interest in the drug is being driven by disinformation on social media platforms and claims from lawmakers, including a Kansas state senator.

Dana Hawkinson, medical director of infection prevention for University of Kansas Health System, said the organization’s poison control hotline receives one to three calls per month regarding ivermectin. That number is increasing, he said.

Under certain medical conditions, ivermectin can be beneficial for humans, but self-dosing is a higher risk than the COVID-19 vaccine, Hawkinson said.

“There are much more and worse side effects with ivermectin. It’s amazing to me people still would like to do this,” Hawkinson said. “If you take ivermectin in the wrong way or you take too much you can certainly get toxicity from it, including central nervous toxicity.”

Forms of ivermectin, such as this apple-flavored paste used as a horse wormer, can be readily purchased at chain retail stores. (Noah Taborda/Kansas Reflector)

Throughout the pandemic, alternative treatments to the COVID-19 virus — including the use of hydroxychloroquine and ivermectin — have become popular despite universal warnings from medical experts. The recent surge in those seeking out the antiparasitic has Kansas and national medical experts uneasy.

Both the Infectious Disease Society of America and the World Health Organization recommend against ivermectin use to treat or prevent COVID-19. The Food and Drug Administration also recommended against this use, and said it received multiple reports of patients who have required medical attention and hospitalization after self-medicating with ivermectin.

The FDA noted use of the drug in doses intended for animals could prove fatal — and even smaller doses could interact dangerously with other medications if not reviewed by a doctor. Overdosing on ivermectin can cause nausea, vomiting, low blood pressure, seizures, coma and even death.

Ivermectin is sold at several chain pharmacies, including CVS, Walgreens and Walmart. The product also is readily available at retailers such as Tractor Supply Co. for as little as $6. 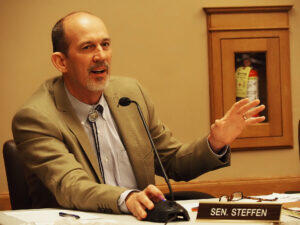 Earlier this year, Sen. Mark Steffen, R-Hutchinson, said it was a mistake not to prescribe ivermectin to decrease hospitalizations and deaths from COVID-19.

“As a physician who’s battled this thing from the start, I never felt like our leadership … has learned lessons from this virus and adapted its strategies,” Steffen said during a joint House and Senate hearing on COVID-19 attended by KDHE secretary Lee Norman. “We’ve been starved for early outpatient treatments. We’ve been starved, and they’ve been there and we’ve denied their use through the CDC, through the NIH, through our administration.”

In June, Steffen referenced the drug in a post on his Facebook page. Alongside a Fox News video clip, Steffen claimed several federal government agencies, Anthony Fauci, big tech and doctors were blocking access to alternative treatments, resulting in many unnecessary deaths.

“This conspiracy killed tens to hundreds of thousands of innocent people. Manslaughter or premeditated murder? The Courts will decide,” Steffen wrote.

Matt Lara, a spokesman for the Kansas Department of Health Environment, repeated warnings made by medical experts against the use of ivermectin to treat COVID-19.

“Ivermectin is not an antiviral drug,” Lara said. “It has been approved in humans for use in some parasitic worms, head lice and certain skin conditions. Taking large doses of this drug is dangerous and can cause serious harm.”

These are the same people that keep crying about experimental vaccines yet they are willing to kill themselves with drugs meant for animals.

Leslie Mayer of Hutchinson is convinced the Lyon County Attorney’s Office withheld evidence that would have helped her late son Travis avoid at least some of the 56 months in prison he served after being found guilty of aggravated battery of a law enforcement officer at a 2017 trial. The withheld evidence, she believes, included […] The post Swaths of Kansas lack written policies on exculpatory evidence, law enforcement dishonesty appeared first on Kansas Reflector.
KANSAS STATE・1 DAY AGO
Kansas Reflector

TOPEKA — Kansas lawmakers are debating the best way to implement baby drop-off boxes in an attempt destigmatize and create safer practices for child relinquishment. Proposed legislation would allow Kansans to safely surrender custody of their infants by leaving them in bassinets equipped with locks, temperature control and alarm systems. House Bill 2024, discussed Monday […] The post Baby bassinets with alarms and locks offered as safe new way of surrendering a child in Kansas appeared first on Kansas Reflector.
KANSAS STATE・3 DAYS AGO
Kansas Reflector

After a bevy of legislation seemingly meant to bring wind energy development to a halt, Kansas senators are considering a bill that could appease rural neighbors annoyed by turbines.  For years, the plains of Kansas has been among the largest sources of wind energy in the United States. Both Democratic and Republican lawmakers have lauded […] The post After past poison pill bills, Kansas Senate considers wind energy compromise appeared first on Kansas Reflector.
KANSAS STATE・1 DAY AGO
Kansas Reflector

WASHINGTON — A Texas judge could decide as soon as next month whether to force the U.S. Food and Drug Administration to pull its two-decade-old approval of the abortion pill, which accounts for more than half of pregnancy terminations in the United States. A nationwide injunction in the case, as requested by anti-abortion groups, would […] The post Federal judge could decide as soon as February to yank abortion pill nationwide appeared first on Kansas Reflector.
TEXAS STATE・4 DAYS AGO
Kansas Reflector

TOPEKA — Sen. Oletha Faust-Goudeau says state law revoked driving privileges for failure to pay a traffic citation should be amended to give motorists the opportunity to apply for a restricted license so they could get to work and earn money to pay off the any penalties. Faust-Goudeau, a Wichita Democrat who led efforts in […] The post Broad coalition urges Kansas lawmakers to amend law on driving license revocations appeared first on Kansas Reflector.
KANSAS STATE・3 DAYS AGO
Kansas Reflector

Anti-LGBTQ+ rhetoric and laws harm your Kansas neighbors. We can build a more welcoming state.

Even as data shows a majority of the country supports LGBTQ+ people and their rights, hostility and violence against the community is on the rise. The past two years have been the deadliest for transgender people in recent history, in large part due to the rapidly increasing number of legislative attacks against trans peoples’ rights […] The post Anti-LGBTQ+ rhetoric and laws harm your Kansas neighbors. We can build a more welcoming state. appeared first on Kansas Reflector.
KANSAS STATE・3 DAYS AGO
Kansas Reflector

Mr. Speaker… Mr. President… Madam Chief Justice and the entire Kansas Supreme Court… members of my Cabinet …leaders of the Kansas tribes… and all the constitutional officers and legislators assembled here tonight. It is my honor to welcome Lieutenant Governor David Toland, his wife Beth Toland, and their children Caroline and William. As we all […] The post Full transcript of Kansas Gov. Laura Kelly’s 2023 State of the State speech appeared first on Kansas Reflector.
KANSAS STATE・3 DAYS AGO
Kansas Reflector

‘We would all be breaking the law’: Kansas runoff election bill draws criticism

TOPEKA — A bill that would implement runoff elections statewide is costly, damaging to voters and potentially illegal, critics say. Under House Bill 2013, if a candidate for a statewide office doesn’t receive a majority of votes in a general election, a runoff election would be held between the two candidates who garnered the most […] The post ‘We would all be breaking the law’: Kansas runoff election bill draws criticism appeared first on Kansas Reflector.
KANSAS STATE・8 HOURS AGO
Kansas Reflector

Last night, I imagined myself as a boiled frog. Laptop in my lap at 8:30 p.m., I highlighted text from one page, copied it and pasted it onto another page. Over and over. Cut. Copy. Paste. Onto the next page. Highlight. Copy. Paste. Onto the next page. Next to me, my daughter and wife were […] The post It’s 10 p.m. Do you know where your work laptop is? appeared first on Kansas Reflector.
KANSAS STATE・19 HOURS AGO
Kansas Reflector

Laura Kelly knows what works for the majority of Kansans. She’s down to earth, plainspoken, and a temperamental and political moderate. Two successive tall Republican men have run against the diminutive Democrat, and each has paid a price for underestimating her political savvy. So perhaps we should pay attention to what the governor said Tuesday […] The post As Kelly shares optimistic words, dark undercurrents flow through Kansas Statehouse appeared first on Kansas Reflector.
KANSAS STATE・2 DAYS AGO
Kansas Reflector

TOPEKA — A recently introduced bill would bring the abortion fight to the county and city level, allowing local government to limit access to reproductive health care. The latest in a series of attempts to restrict abortion, Senate Bill 65 would give cities and counties the right to enact stricter laws on abortion than current […] The post Proposed Kansas bill would turn abortion control over to cities, counties appeared first on Kansas Reflector.
KANSAS STATE・4 DAYS AGO
Kansas Reflector

TOPEKA — Lawmakers have begun evaluating legislation in an effort to fix years of built-up problems within the juvenile justice system. First up: A bill that could expand access to behavioral health treatment through crisis intervention centers. During a House Corrections and Juvenile Justice Committee meeting Monday, a week after lawmakers heard from attorneys and […] The post New bill seen as first step toward fixing problems in Kansas juvenile justice system appeared first on Kansas Reflector.
KANSAS STATE・3 DAYS AGO
Kansas Reflector

TOPEKA — The Statehouse needs to honor Kansas history through art, legislators said, advocating for a new mural celebrating the 1st Kansas Colored Infantry Regiment and pushing for the placement of a replica Ad Astra statue on the statehouse lawn.  Placing the statue has been the work of many years. The eight-foot replica statue of […] The post Kansas lawmakers say it’s time to finally install Ad Astra replica statue on lawn appeared first on Kansas Reflector.
KANSAS STATE・2 DAYS AGO
Kansas Reflector

Kansas Reflector is a nonprofit news operation providing in-depth reporting, diverse opinions and daily coverage of state government and politics. This public service is free to readers and other news outlets. Through its opinion section, Kansas Reflector works to amplify voices of people whose lives are affected by public policies but who might typically be left out of public debate. We seek to increase Kansans’ awareness of how decisions made by elected representatives and other public servants affect our day-to-day lives. We hope to empower and inspire greater participation in democracy throughout Kansas. Launched in July 2020, Kansas Reflector is an affiliate of States Newsroom, a national 501(c)(3) nonprofit supported by grants and a coalition of donors and readers. Kansas Reflector retains editorial independence.