Report: Trail Blazers Not in the Running for Paul Millsap 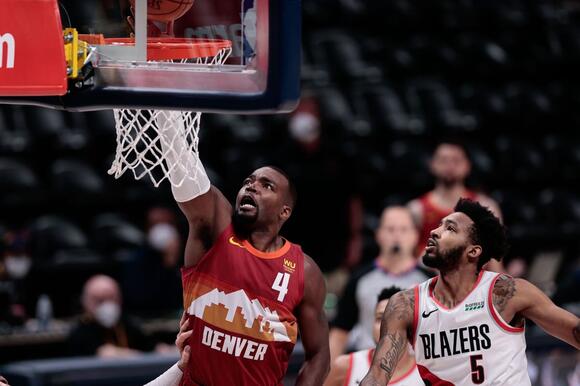 The Trail Blazers could provide Paul Millsap pretty much exactly the role he hopes to play in 2021-22. Unfortunately, Portland still seems no closer to making inroads with the league's top remaining free-agent as the regular season fast approaches.

According to Jake Fischer of Bleacher Report , though Millsap "has been most often linked" to the Golden State Warriors and received interest from several other teams, the veteran still isn't close to signing a contract.

Golden State has been the team most often linked by league sources to Paul Millsap, arguably the most consequential free agent left. Yet while the 36-year-old former All-Star has drawn interest from the Warriors, Hawks, Nets, Pelicans, 76ers and Timberwolves, no team sources contacted by Bleacher Report indicated any contract agreement with Millsap has come close to the finish line.

Conspicuously absent from that list of suitors is Portland, which still possesses just enough salary ballast to theoretically sign Millsap despite dipping into the taxpayer's mid-level exception to give Greg Brown III a three-year deal. Millsap is reportedly seeking a salary at or near the $5.9 million value of the tpMLE.

It's not just the Blazers' above-minimum spending power that could make them an attractive destination for Millsap. With Jusuf Nurkic and Cody Zeller notoriously injury-prone, Portland could offer him backup minutes at both center and power forward while making Millsap a near-permanent fixture of downsized units at small-ball five—just the role one league source believes he desires.

"I think he just wants to know he's the third big or the reserve, small-ball 5 for a good team," one assistant general manager told B/R.

Clearly, one or both sides believe there's something missing in a potential marriage between the Blazers and Millsap. Chris Haynes of Yahoo Sports reported three weeks ago that Portland had eyes for Millsap , but no subsequent intel has revealed that interest is mutual.

The Blazers currently have 13 players under contract for 2021-22, and reportedly plan to sign one more. As well as he'd fit in Rip City, don't expect it to be Millsap.

Mariners outlast Rangers in 11, close in on playoff berth

SEATTLE (AP) — Mitch Haniger and Jarred Kelenic both homered twice, J.P. Crawford singled home the winning run in the 11th inning and the Seattle Mariners closed in on their first playoff berth in 21 years by beating the Texas Rangers 10-9 Thursday night. The Mariners moved a half-game ahead of Tampa Bay for the second of three AL wild cards and reduced their magic number to one for clinching a postseason spot. One more win or a Baltimore loss would give Seattle its first playoff appearance since 2001, ending the longest drought in the four major North American professional sports. The Mariners are 1 1/2 games behind Toronto for the top wild card, which hosts a best-of-three series beginning Oct. 7. The other two wild cards play on the road.
SEATTLE, WA・24 MINUTES AGO