Carmelo Anthony Explains Why 'It Don't Get Better' Than Damian Lillard 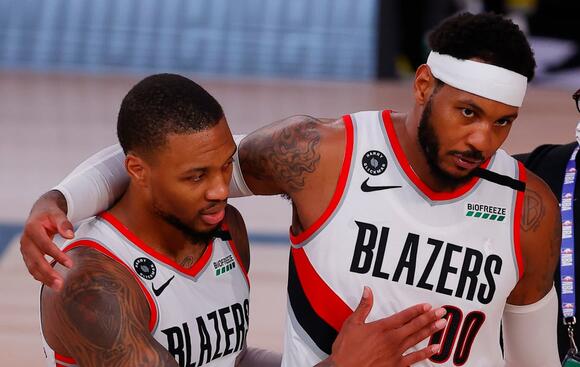 On Showtime's "All The Smoke," Carmelo Anthony discussed why he'll always be indebted to Damian Lillard as a person, not just a hooper.

It seems crazy now, after two seasons with the Trail Blazers that re-cemented himself as a surefire rotation player, but it wasn't long ago that Carmelo Anthony couldn't find a job.

When he signed with Portland in November 2019, only after a spate of injuries left the Blazers woefully thin up front, it had been over a year since Anthony had last stepped foot on an NBA floor. The hasty nature of his awkward exit from the Houston Rockets only further confirmed what Anthony's previous disappointing season with the Oklahoma City Thunder had laid bare.

Unless 'Melo was willing to both come off the bench and occupy a more ancillary offensive role, the future Hall-of-Famer's career might be over prematurely.

All that's firmly in the rearview mirror now, with Anthony's sights set on winning an elusive championship as a member of the Los Angeles Lakers. Just because he signed up to play next to LeBron James with the Blazers' longtime rivals, though, hardly means Anthony has lost any love for Rip City—and specifically, another superstar with whom he shares an unbreakable personal bond.

During an appearance on Showtime's All The Smoke with Matt Barnes and Stephen Jackson , Anthony discussed the crucial role Damian Lillard played in his late-career renaissance.

"Dame is a real one because Dame always knew, like, 'We don't care about what nobody else is saying. We know you can play, I know you can play. I see you, I'll talk to you,'" Anthony said. "So when you get somebody like that rockin' with you, it makes that situation easier."

"I always told myself, like, Dame will always go down as one of my top dogs. Forget basketball. Like as a human being, you know what I'm saying? It don't get better than that."

The crisis of confidence and identity Anthony was forced to confront after failing in Oklahoma City and Houston could've marked the end of his iconic career. The 37-year-old has admitted as much on multiple occasions since joining the Lakers, even thanking the city of Portland in a farewell social media post for "letting me love the game of basketball again."

Clearly, Anthony still holds the Blazers, the team's fans and Rip City at large in extremely high esteem. His two-year stint in the Pacific Northwest is definitely not a portion of Anthony's nearly two-decade career he'll be taking for granted.

After all, if not for the sense of belonging and security re-instilled in him by a player, leader and person of Lillard's caliber, it might not have transpired at all.

READ MORE: Why Wouldn't the Trail Blazers Beat Their Over/Under?