Why Wouldn't the Trail Blazers Beat Their Over/Under? 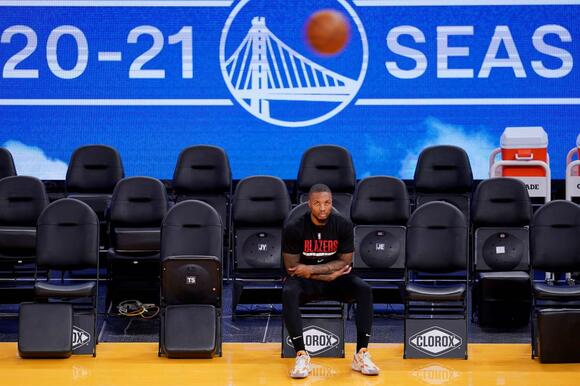 Online sportsbook BetOnline placed the Blazers' over/under at 43.5 wins. What could keep them from beating it?

Internet sportsbook BetOnline released its slate of over/unders for the 2021-22 regular season on Monday.

The Trail Blazers' number comes in at 43.5 wins, somewhat low considering Portland has eclipsed that rate of season-long success in four of the six seasons since LaMarcus Aldridge left town in 2015. The Blazers played at a 48-win pace last season despite Jusuf Nurkic and C.J. McCollum missing significant chunks of the schedule, and the "losses" of Carmelo Anthony and Enes Kanter off the bench could very well prove addition by subtraction.

The most telling indicator of the oddsmaker's appraisal of Portland for 2021-22? That 43.5 over/under is just eighth-highest in the Western Conference, meaning Las Vegas expects the Blazers to again be fighting for their playoff lives during the last week of the regular season.

Even the LA Clippers, poised to play most if not all of next season without Kawhi Leonard, have a slightly higher over/under than Portland. The Dallas Mavericks and Denver Nuggets, the former of whom finished with the same record as the Blazers last season and latter of whom will be without Jamal Murray until March at the earliest, boast over/unders of 47.5, four full games ahead of Portland's.

Maybe Vegas knows something about the Blazers prospects for next season the public doesn't? Doubtful. In all likelihood, justification behind Portland's surprisingly low over/under is tied directly to the uncertain fate of Damian Lillard.

All signs, including recent conversations he's had with multiple teammates, point to Lillard playing the full season in Rip City despite his obvious frustration with the franchise. But the unknown of Chauncey Billups on the sidelines combined with an even more competitive Western Conference—in which all but two teams are vying for the playoffs—leaves room for volatility that at least could cause Lillard to force his way from the Blazers early, artificially driving down their expected win total.

Absent the doomsday scenario of Lillard demanding a trade, it's safe to say Portland's over/under would sit closer to those of the Warriors, Mavericks and Nuggets than the Memphis Grizzlies'. The rebuilt Washington Wizards' 33.5 over/under is a few wins lower than anticipated, too, perhaps due to the similar specter of Bradley Beal's future in D.C.

It's just tough to imagine Portland winning fewer than 44 games in 2021-22 if Lillard is on the roster past the trade deadline. Injuries are a complicating factor, of course, but not for the Blazers any more than the Mavericks, and certainly the Nuggets and Clippers. While Billups' lack of experience must be accounted for, it shouldn't be nearly as big a red flag as Jason Kidd's on- and off-court histories at his previous head-coaching stops before taking over in Dallas.

Bottom line: Lillard isn't going anywhere before next summer barring the drastic and unforeseen. If you're a bettor, hammer Portland's over and don't look back. Any other wager would essentially be predicting an imminent departure that seems ever unlikely.

Former Cleveland Cavaliers forward Richard Jefferson commented in a series of tweets on the likely suspension of Boston Celtics head coach Ime Udoka for a relationship with a female team staffer. Jefferson’s confusion on the suspension is because the expected length will be a full year when the final decision...
BOSTON, MA・2 DAYS AGO