Why Norman Powell Won't 'Get Lost' Offensively Under Chauncey Billups 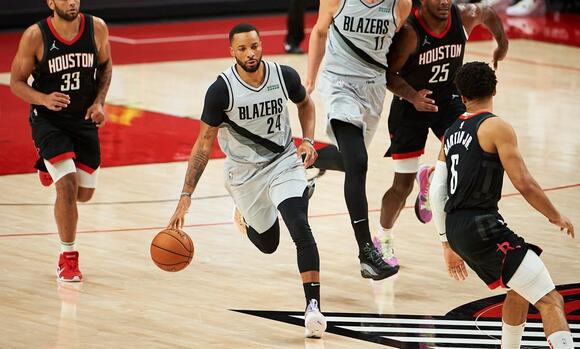 Norman Powell, by his own admission, "got lost" offensively during his first season with the Blazers. Chauncey Billups' offense may not let him.

It's no coincidence that Norman Powell's best performance with the Trail Blazers to date came when Terry Stotts made a concerted effort to get him involved early.

Powell scored seven of his team's first 11 points during Portland's blowout Game 4 win over the Denver Nuggets in the first round of the playoffs, clearly energized by an opening possession on which he was the Blazers' primary option. By the time he left the floor with a Portland victory well in hand, a fawning Moda Center crowd serenaded Powell with chants.

The sense of place and appreciation Powell gleaned from that specific moment, not to mention countless others that made Rip City feel like home following his trade deadline acquisition from the Toronto Raptors in late March, loomed large to his decision in free agency. Powell, 28, wasn't about to waste the rest of his playing prime by signing a long-term contract with a team that didn't want him, in a city where he wasn't embraced.

But those comforts he felt with the Blazers were hardly the only reasons Powell re-upped for five years and $90 million on the first day of free agency. Under rookie head coach Chauncey Billups, Portland plans to take sustained advantage of Powell's offensive gifts the way it never quite managed last season.

"I was in Toronto for five and a half years, so I knew exactly where all my shots were coming from," Powell told Aaron Fentress of The Oregonian . "Sometimes I think I got lost in the mix of what the Blazers do normally. I think that's pretty normal when you're the new guy fitting in."

The eye test laid bare what was obvious before Powell ever put on a Blazers uniform: Another score-first guard would inevitably struggle to find consistent footing offensively next to Damian Lillard and C.J. McCollum. It didn't help that Powell's career-best play leading up to the deadline was the result of career-high usage, either.

Powell indeed spent less time on the ball in Portland, but without the normally associated uptick in efficiency. His usage dipped from 24.4 percent to 20.4 percent, and his effective field goal percentage dropped nearly nine points to 51.8 percent, per Basketball Reference , below league average.

At least some of that newfound inefficiency was due to the whims of jump-shooting. Powell shot a solid 39.5 percent on catch-and-shoot threes with the Blazers last season, but a red-hot 44.5 percent in Toronto on slightly higher volume, per NBA.com/stats . Assuming that latter mark proves an aberration, Portland would still be thrilled if Powell settles into the low 40s as a spot-up three-point shooter from here.

The Blazers didn't give up Gary Trent Jr. for Powell to morph into an older version of the 23-year-old sharpshooter, though. They need much more than that from Powell to reach their ceiling offensively, and Billups is confident he can provide it despite last season's inconsistencies.

"Our talks were all about what we can do with him, not about what happened before," Billups told The Oregonian of his discussions with Powell in free agency. "Because that didn't have anything to do with me. But what I've seen and what I envision going forward."

Billups has preached ball and player movement, putting pressure on the rim and seeking out transition opportunities as means for one of basketball's most prolific yet predictable offenses to get even better.

Obviously, Portland's ability to maintain an elite offensive rating while implementing those principles hinges mostly on Lillard and McCollum. As much as Billups wants to lighten their loads under a more egalitarian offensive approach, Lillard especially is just too dominant to deviate much from what's propelled him to superstardom. The same generally applies to McCollum.

For most of the Blazers, Billups' desired approach to offense will still mark a departure from the norm. Not Powell.

Offensive tenets of second-side playmaking, downhill attacking and going from "good to "great" have been hallmarks of Toronto's evolution with Nick Nurse on the sidelines. It's no surprise Powell immediately reached new levels of effectiveness and efficiency on that side of the ball once Nurse replaced Dwane Casey.

Maybe the shift from Stotts to Billups won't pay similar dividends for Portland as a whole. Neil Olshey didn't exactly swing a league-shaking trade like the one that sent Kawhi Leonard to Toronto for a one-year rental, and the Blazers don't have a young player who could pop quite like Pascal Siakam did, either. The roster status quo will have to be enough.

If there's a single incumbent in Portland who benefits most from Billups taking the reins, though, Powell seems like a good bet. Not only is he the player best equipped to shoulder a portion of the usage left by Lillard and McCollum, but the advantage opportunities Billups' offense strives to create directly align with his strengths as a spot-up shooter, straight-line driver and transition engine.

On average, Powell both possessed the ball longer and took more dribbles with the Blazers last season than he did with the Raptors, per NBA.com/stats . Expect those numbers to trend back down in the future, even as Powell becomes a bigger part of Portland's plans offensively—and works to help his new team reach " very attainable " championship heights of his old one.

READ MORE: Norman Powell is Confident the Blazers Can Win a Title

ESPN’s Malika Andrews stirred up more controversy for the NBA’s Boston Celtics when she brought up the history of the team’s interim head coach from more than 13 years ago. During an on-air NBA Today broadcast last week, the sports world was upended when it was reported...
BOSTON, MA・21 HOURS AGO
TMZ.com

The Celtics employee with whom Ime Udoka had an affair helped make all his travel arrangements ... and that job sometimes included organizing travel for his fiancee, Nia Long. Sources connected to the couple and the NBA franchise tell TMZ ... one of the staffer's duties included planning Udoka's team-related travel, and we're told she was also involved in booking travel for Nia to come to Boston or to road games.
BOSTON, MA・2 DAYS AGO