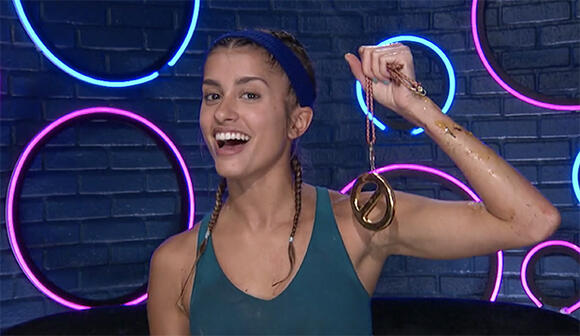 Alyssa Lopez won OTEV this week on “ Big Brother 23” — or technically, she was thrown it by Kyland Young , who wanted her to win so he could get the second Veto since he bet on her in Veto Derby. No matter, she’s still in the “BB” record books now as an OTEV champ. The good news for her is that the OTEV curse has been broken, by Cody Calafiore last year, but the bad news is that she’s unlikely to pull a Cody and win the whole shebang.

Until Cody last season, nobody had won the iconic Veto comp and gone on to win the season. OTEV was introduced in Season 7, the first all-stars installment, in 2006 and has been played every year except Season 10. Here are all the OTEV champs:

Before Cody won the second all-stars season last year, Dan, the Season 10 champ, was the only person to have won OTEV and the game, but they were in different seasons. Dan, who finished second on Season 14, is one of four runner-ups, alongside Ryan, Liz and Tyler.

Alyssa won’t have to fret over the dreaded OTEV curse, but the odds are stacked against her at the moment to make it two years in a row of OTEV champs winning the game. Unlike Cody, she’s not in her season’s dominant alliance, the Cookout, much less the leader of it. Not only does she not know the Cookout exists, but she has no idea it’s plotting her demise to get its members to the final six to guarantee a Black winner. She’s a pawn in their game, Xavier ‘s plus-one whom they’ll cut eventually if things go according to plan — and so far they are.

Still, even if you pretend the Cookout doesn’t exist, it’s not like Alyssa’s chances would be extraordinarily better. There are still nine other people besides her now, and it’s not like Cody breaking the curse will kick off a new streak of OTEV champs winning the game. The stars have to align. It’ll happen again, but by the looks of it right now, probably not this year.

PREDICT who will win ‘Big Brother 23’

The CHS girls varsity tennis team continues its dominance in the Palomares League with an impressive 15-3 win over the Alta Loma Braves on Tuesday, Followed by an equally commanding victory over Glendora, 16-2, on Thursday. With the two wins Claremont officially has an undefeated league record at 10-0, 12-2...
CLAREMONT, CA・6 DAYS AGO
Jamestown Sun

Blue Jays looking for 'a big win' this week

No drama, no disrespect, just one unified team dialed in ready to do the work. "The team aspect of this group is especially strong and that's going to pay off," Jamestown High School head volleyball coach Sara Hegerle said. "The other day we got to practice and there were three or four kids who got there early to pick up the tape that was on the floor of the gym. They recognize the importance of the things that don't necessarily make the cover of the paper.
1 DAY AGO