CJ McCollum Believes Damian Lillard is 'All In' With Trail Blazers 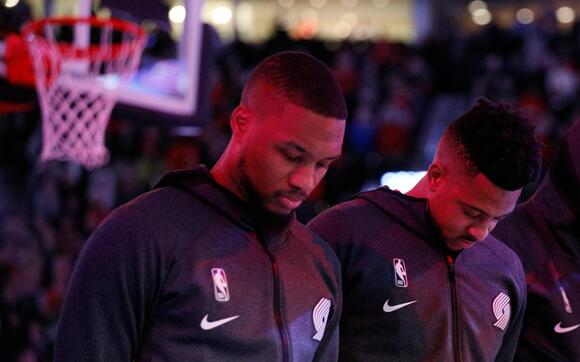 On "The Woj Podcast," CJ McCollum expressed his belief that Damian Lillard is "all in" with the Blazers this season.

Among the many sticking points in any prospective trade involving C.J. McCollum is his status as one of Damian Lillard's closest friends.

The Trail Blazers' star guards have waxed poetic for years about their shared goal of bringing the Larry O'Brien Trophy to Portland for the first time since 1977. But the public pressure Lillard put on the organization this summer—stemming from another dispiriting first-round playoff exit as well as the controversial nature of the Blazers' search to replace Terry Stotts—to upgrade the roster led many to believe he was implicitly calling for McCollum's departure.

After all, how could the Blazers possibly build a title-worthy supporting cast around Lillard without trading McCollum? Not only would he fetch a greater return than any player on the roster sans Lillard, but McCollum's salary is key to cash-strapped Portland even having the financial wherewithal to bring in a high-priced sidekick whose strengths and weaknesses better align with its franchise player's.

Momentum from early summer on a potential McCollum trade has pretty much halted entirely , though, and all recent signs point to Lillard playing at least one more season in Rip City despite the front office failing to meet his mandate for change. But just in case you're still spooked by the specter of Lillard imminently forcing his way out of Portland, McCollum's appearance on The Woj Podcast should alleviate that fear for the foreseeable future.

Asked by ESPN's Adrian Wojnarowski where Lillard's head is as the 2021-22 season fast approaches, McCollum reiterated that his longtime teammate simply wants to win a championship.

Now the more pertinent part for anxious Blazers fans: McCollum believes Lillard remains "all in" on raising a banner in Portland.

Take a breath, close the trade machine and take a look at the Blazers' just-released regular-season schedule with the confidence that both Lillard and McCollum aren't going anywhere anytime soon.

Well, at least until next summer—or maybe the trade deadline if Portland's season goes sideways fast.

READ MORE: What to Know About the Blazers' 2021-22 Regular-Season Schedule