What to Know About Blazers' Regular Season Schedule 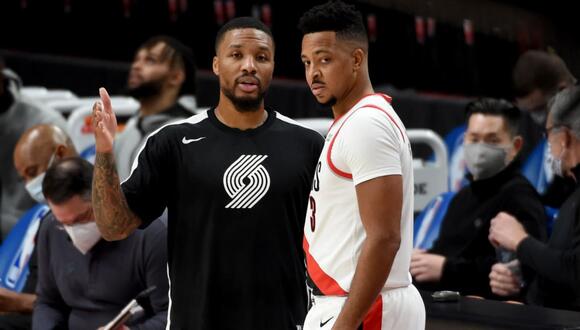 The NBA has released the full regular-season schedule for 2021-22. Here's what you need to know about the Trail Blazers' 82-game grind.

The NBA released the full schedule for 2021-22 on Friday, setting the stage for what's poised to be among the most consequential seasons in Trail Blazers history.

Here's what you need to know most about the 82-game grind Portland will tipoff against the Sacramento Kings at Moda Center—officially just two months away.

The Chauncey Billups era begins with four of the Blazers' first five games at home, but not every October game at Moda Center projects to be as easy as their season opener.

Portland hosts the Phoenix Suns, fresh off the NBA Finals, for its second game of the season on October 23. Ja Morant and the budding rival Memphis Grizzlies come to Rip City four days later, a matchup sandwiched between a home-and-home with the LA Clippers—playing without Kawhi Leonard—that ends in Portland on October 29.

Must-wins don't really exist in the regular season until Spring, and any NBA team can beat any other on any given night. The Blazers enter 2021-22 under lots of pressure after a controversial and mishandled offseason, though.

A loss to a team like the Kings in the opener was always going to sting, but the difficulty of Portland's next four games—despite three coming at home—would only add to the negative local hoopla surrounding it.

14 Back-to-Backs, But Less Than Half on the Road

The Blazers' 14 back-to-backs sound like a lot and are indeed tied for second-most in the league. But they share that total with 14 other teams, none of whom will play fewer than 12 back-to-backs this season.

A silver lining for Portland? Just six of those such games came on the road, equal with the New Orleans Pelicans for second-least in the league.

The Second Half is Loaded

Not only will the Blazers play 26 of their last 41 games away from the friendly confines of Moda Center, but 10 of those matchups are comprised of separate five-game road trips. Depending on the tenor of Portland's play at the time, tandem five-game home stands over the second half of the season could help Billups' team bank some crucial wins or cause it to slide further in the standings.

It's not like the Blazers' competition is easy, either.

From February 9 to March 20, a 15-game stretch that includes the All-Star break, they'll face 12 teams that made the playoffs last season. Portland's other opponents over that timeframe? The Golden State Warriors, a potential title contender, and the upstart Minnesota Timberwolves, who host the Blazers for a home-and-home.

At Least Portland Has One Can't-Miss National TV Matchup

Portland, unsurprisingly, isn't exactly a favorite of TV bigwigs. The Blazers will play on ESPN/ABC and TNT just nine times in 2021-22, and even including NBA TV broadcasts doesn't vault them to the league's top half in terms of total nationally-televised games.

A fun bonus? Portland will be at Staples Center on New Year's Eve for a primetime matchup with LeBron James, Anthony Davis and Russell Westbrook, the latter of whom is as close to an on-court rival as Lillard has in the NBA.

Go ahead and block out about three hours of TV time before ringing in 2022. You won't want to miss that one.

A Finish With Playoff Implications

As has become an annual rite of passage, expect the last few days of the regular season to loom extremely large for Portland. The Blazers play their last three games of 2021-22 in four days: road tilts with the New Orleans Pelicans and Dallas Mavericks, followed by the season finale at home against the Utah Jazz.

No one would be surprised if Dallas and Portland, just like last season, jockeyed for playoff positioning down to the wire again. The Pelicans are better described as a relative unknown than a likely playoff team, but it'd be foolish to underestimate how high Zion Williamson could take them. The Jazz will surely be sitting their regulars or fighting for seeding at the top of the West come April 10.

Barring a major trade at the deadline, we'll know pretty much exactly what type of team the Blazers are entering the last week of the regular season. But their chances at winning a round in the playoffs—or in a worst-case scenario even getting there—could come down to these last three games regardless.

The Celtics employee with whom Ime Udoka had an affair helped make all his travel arrangements ... and that job sometimes included organizing travel for his fiancee, Nia Long. Sources connected to the couple and the NBA franchise tell TMZ ... one of the staffer's duties included planning Udoka's team-related travel, and we're told she was also involved in booking travel for Nia to come to Boston or to road games.
BOSTON, MA・22 HOURS AGO
Inside The Suns

The Phoenix Suns point guard was claimed by one person to have his ranking overrated on ESPN's list.
PHOENIX, AZ・33 MINUTES AGO
94 WIP Sports Radio

Calcaterra was inactive the first two weeks before making his NFL debut Sunday, and with Dallas Goedert out to start the second half, Jalen Hurts quickly looked to Calcaterra for a huge gainer.
PHILADELPHIA, PA・32 MINUTES AGO