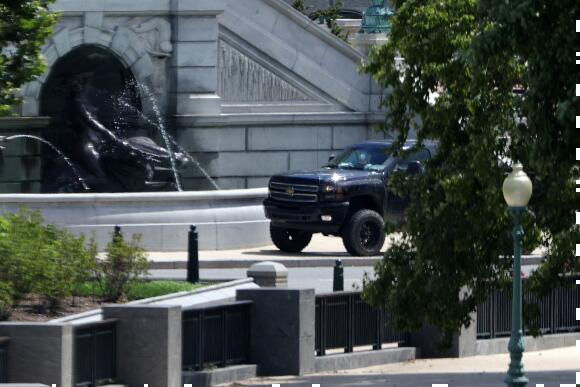 The suspect who claimed to have a bomb in his truck near the U.S. Capitol on Thursday has been charged in federal court and faces up to life in prison if convicted.

The first charge carries with it a maximum sentence of life in prison, as well as a possible fine of up to $250,000. The second carries up to 10 years in prison, with an additional $250,000 fine.

Roseberry was taken into custody on Thursday afternoon after surrendering to authorities following an hours-long standoff after he parked his pickup truck near the Library of Congress and threatened to detonate a bomb, according to police.

In a since-removed Facebook livestream, the suspect also issued several demands, including calling for President Biden ’s resignation as well as a launch of airstrikes on the Taliban in Afghanistan, CNBC reported.

The bomb threat Thursday prompted evacuations of the Cannon House Office Building, the Library of Congress's Jefferson Building and other nearby buildings as authorities conducted investigations and negotiations.

Capitol Police said later Thursday that while they did not find explosives in the man’s truck, "possible bomb making materials" were collected by authorities.

During the virtual hearing Friday, Roseberry informed the judge that he had not taken his “mind medicine” for two days, and also did not have access to his blood pressure medications and other regular treatments.

Faruqui subsequently ordered the court to get the defendant access to his needed medications, and approved a request from Assistant U.S. Attorney Luke Jones to hold a competency hearing to determine if he is fit to stand trial.

Jones also requested that Roseberry remain in jail at least until his next hearing, which is tentatively scheduled for next Wednesday at 4 p.m.

Roseberry, who authorities previously said was 49 but who said he was 51 in court Friday, told Faruqui that although they couldn’t “see each other eye to eye” during the virtual proceeding, “I can in your voice that you’re a good man.”

“And I don’t have to not trust you,” he said, adding, “I’m willing to do whatever you ask.”

According to court documents unsealed Friday, a relative of Roseberry told local law enforcement on Wednesday that the defendant “had recently expressed anti-government views and an intent to travel to Virginia or Washington, D.C. to conduct acts of violence.”

Capitol Police Chief Thomas Manger said Thursday that authorities had spoken with some family members who said that Roseberry had been “dealing with” issues, adding, “We do know that Mr. Roseberry has had some losses of family. I believe his mother recently passed away.”

A Capitol riot suspect who livestreamed the insurrection on TikTok was caught after citizen sleuths preserved the video, the FBI says

Gross told authorities viewers gave him around $150 to $200 in donations, but he could not retrieve them after his account was "banned."
PUBLIC SAFETY・20 HOURS AGO
The US Sun

A POSSIBLE pipe bomb was discovered in downtown Oakland Wednesday, forcing evacuations in the area. Many roads in the area near city hall were closed down by police as an investigation went underway. “Clay Street between 11th and 16th St and Jefferson and Broadway is closed due to possible incendiary...
OAKLAND, CA・15 HOURS AGO
cbslocal.com

MIAMI (CBSMiami/AP) – A man who was extradited to the U.S. to face charges in connection to the assassination of Haitian President Jovenel Moïse is set to make his first appearance in court on Thursday. Arrested in the Dominican Republic last month, Rodolphe Jaar is currently in custody...
MIAMI, FL・17 MINUTES AGO
Newsweek

Clifford Meteer likened Ashli Babbitt's death on January 6 to a "murder" in the Capitol and said it was a patriot's duty to "rattle the cage."
PROTESTS・2 DAYS AGO

LONDON -- Two teenagers have been arrested in England as part of an ongoing investigation into Saturday's hostage-taking incident at a synagogue in the United States, British authorities said. The pair were detained in southern Manchester on Sunday evening and "remain in custody for questioning," according to a statement from...
COLLEYVILLE, TX・2 DAYS AGO
newscenter1.tv

SIOUX FALLS, S.D. — A man charged for participating in the January 6 riot on the U.S. Capitol appeared in a Sioux Falls courtroom Wednesday afternoon. Billy Knutson is charged with entering and remaining in a restricted building or grounds, disorderly and disruptive conduct in a restricted building or grounds, disorderly conduct in a Capitol building, and parading, demonstrating, or picketing in a Capitol building.
SIOUX FALLS, SD・6 DAYS AGO
insideedition.com

More than a year since rioters attacked the Capitol, the person responsible for planting pipe bombs in the Capitol Hill neighborhood of Washington, D.C. remains on the loose. Someone cloaked in a hoodie and covered in a mask, glasses and gloves was seen on camera planting bombs near the Democratic National Committee and Republican National Committee on Jan. 5, 2021, the night before the assault on the Capitol, according to CBS News.
WASHINGTON, DC・9 DAYS AGO
kptv.com

PORTLAND, Ore. (KPTV) - Thursday marks the one year anniversary of when rioters charged the steps of the U.S. Capitol as congress began counting the Electoral College votes. A few of those rioters are from the Pacific Northwest. According to federal prosecutors, two men from Washington State and four from...
OREGON STATE・13 DAYS AGO

Trump had sought to block the documents by arguing the records should remain confidential so presidents can receive candid advice from aides.
PRESIDENTIAL ELECTION・14 HOURS AGO
Daily Voice

A juvenile has been arrested for allegedly making a series of phone calls threatening violence at an area school. The incident took place on Monday, Jan. 10, when the New York State Police along with other police agencies, responded to the SS Seward Institute High School in Orange County in the village of Florida.
ORANGE COUNTY, NY・20 HOURS AGO
5 On Your Side

ST. LOUIS — St. Louis Circuit Attorney Kim Gardner’s Office has dropped charges against a man accused of setting a bomb off underneath his ex-wife’s car in 2018. The move comes less than 24 hours after the I-Team reported allegations that Gardner’s office violated the bombing suspect’s right to a speedy trial.
SAINT LOUIS, MO・7 DAYS AGO
wearegreenbay.com

LITTLE CHUTE, Wis. (WFRV) – Police have released additional information after an incident at Little Chute High School Wednesday morning that prompted law enforcement to respond to the area. According to Fox Valley Metro Police Department, they responded to the area for reports of a bomb threat which was...
LITTLE CHUTE, WI・20 HOURS AGO

LOUISVILLE, Ky. — The bond remains at $1 million for two men charged in the kidnapping and murdering another man. Roderick Bush and Dejuan Simonton, who are each charged with complicity to murder and complicity to kidnapping in the death of 25-year-old Jermaine Sprewer, appeared in arraignment court Tuesday morning, Jan. 18.
LOUISVILLE, KY・1 DAY AGO
WGNO

The student allegedly called in the threat to Franklin Jr. High at around 7:40 a.m., and officers were made aware of similar bomb threat information circulating on social media.
FRANKLIN, LA・1 DAY AGO
whiterivernow.com

Woman charged after bomb threat to hospital in December

More information has been released regarding the bomb threat called into an area hospital in late December. According to court information filed last week in Independence County Circuit Court, authorities responded to White River Medical Center around 6:30 p.m., Dec. 29, 2021, on a report that a caller had told a phone operator at the hospital: “I’m going to come up there and blow up the place.”
BATESVILLE, AR・2 DAYS AGO
wfft.com

FORT WAYNE, Ind. (WFFT) — Police say an armed man who was shot by officers after they were called to his home for suicide threats is now in jail. The Fort Wayne Police Department says 36-year-old Thomas A. May was released from a local hospital Sunday and then taken into custody.
FORT WAYNE, IN・9 DAYS AGO
KCCI.com

DES MOINES, Iowa — Police are investigating a bombing threat at a Des Moines church. A crisis line counselor on the east coast called Des Moines police saying they had been in an online conversation with a person who said they had placed multiple devices outside Burns United Methodist Church.
DES MOINES, IA・10 DAYS AGO
The Independent

The wife of one of the Supreme Court justices who could be charged with deciding whether the House January 6th select committee can view Trump administration White House records has signed on to an open letter calling for the committee’s two Republican members to be ousted from the House GOP conference. Virginia “Ginny” Thomas, a longtime conservative activist and the wife of Justice Clarence Thomas, was one of more than 60 signatories to the open letter, which was organised by the pro-Trump Conservative Action Project and asks House Minority Leader Kevin McCarthy to “act immediately to remove” Reps Liz...
CONGRESS & COURTS・1 DAY AGO
Newsweek

Ellis tweeted after being served a subpoena by the January 6 Committee investigating the Capitol attack.
POTUS・13 HOURS AGO