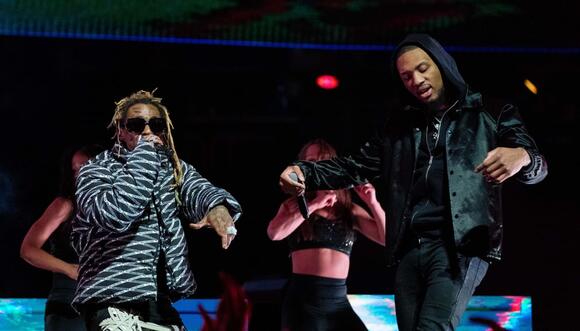 Damian Lillard's latest album, "Different On Levels The Lord Allowed," is his most comprehensive and star-studded project yet.

Damian Lillard continues cementing himself as the most accomplished emcee to ever play in the NBA.

The Trail Blazers superstar began teasing his latest music project earlier this summer. On August 5, he released a full music video for "The Juice," the opening track of Different On Levels The Lord Allowed featuring Jane Handcock.

Lillard's latest album is his most star-studded yet. The 12-track set includes features from the likes of Lil' Wayne, a longtime collaborator, Snoop Dogg, Q-Tip, Raphael Saadiq and Blxst, among others.

The album is littered with references to Lillard's family and friends and his beloved hometown of Oakland, as well as the trappings and luxuries of success. Though Different On Levels The Lord Allowed is replete with NBA-centric rhymes, a couple retired basketball luminaries receive extra special mention.

"Him Duncan," the seventh song on the album, is a play on the name of San Antonio Spurs icon Tim Duncan, a five-time NBA champion. The album's penultimate track, "Kobe," an homage to the late Los Angeles Lakers legend and his daughter, Gigi, featuring Snoop Dogg and Derrick Milano, was first featured on the tracklist for NBA 2K21.

The Celtics employee with whom Ime Udoka had an affair helped make all his travel arrangements ... and that job sometimes included organizing travel for his fiancee, Nia Long. Sources connected to the couple and the NBA franchise tell TMZ ... one of the staffer's duties included planning Udoka's team-related travel, and we're told she was also involved in booking travel for Nia to come to Boston or to road games.
1 DAY AGO
Sportscasting

While Phil Jackson's coaching techniques may not seem like the norm in NBA circles, it's impossible to argue with the Zen Master's results. The post Shaquille O’Neal Details Phil Jackson’s Coaching Techniques, Including Sage, Hour-Long Walkthroughs, and Happy Places appeared first on Sportscasting | Pure Sports.
LOS ANGELES, CA・21 MINUTES AGO