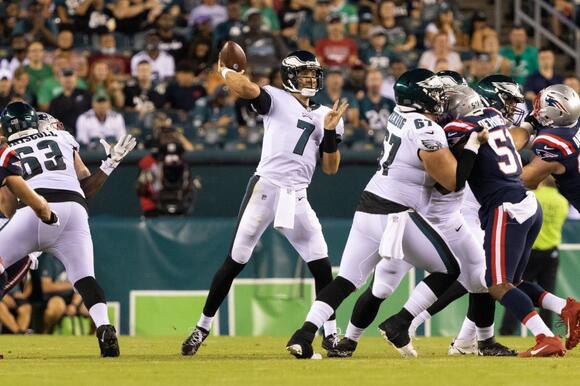 PHILADELPHIA – One minute, Jalen Hurts looked fine. The next, he was not fine and was on his way to the hospital on Thursday night.

It wasn’t a hit that sent him there, but stomach pain.

“He had pain in his abdomen,” said head coach Nick Sirianni. “For a guy like that to tell us, he’s a tough guy, so it must have been hurting him pretty good for him to let us know about that.”

Hurts did not have COVID-19, but a source confirmed that he was sent home with direction to spend the next couple of days resting.

The Eagles have off Friday then a scheduled walkthrough on Saturday before returning to Lincoln Financial Field Sunday night for an open-to-the-public practice at 7 p.m.

“He came in, he wasn’t feeling great,” said Sirianni. “We put him through pregame warmups, and he wanted to go out there and go through pregame warmups. He came back in. He still wasn’t feeling good. We evaluated him. We just decided that it wasn’t in his best interest to play with what he was feeling. We evaluated him. He’s doing OK now. That’s why we held him out.”

Exactly where Hurts was after the Patriots pasted the Eagles 35-0 in the second preseason game.

“He’s not still at the hospital. I do know that,” said the coach. “I don’t know if he came back to the stadium. I’m assuming he did, to get the car. I didn’t see him after in the locker room. That’s about all the information I have.”

With Hurts out, Joe Flacco started and played the entire half.

The veteran quarterback has had better outings. He finished 10-for-17 for just 83 yards and was sacked once.

To be fair, he doesn’t get many reps with the first-team receiver group, and he had zero reps with DeVonta Smith who made his preseason debut.

Flacco, though, didn’t use that as an excuse.

“You throw routes on air with them and stuff like that,” he said. “You always get a couple of reps with them here and there. Sometimes that stuff’s overrated. When you go out there and play in a game, it is what it is. You make the most of it. Especially in my role, that’s part of it.

“With what I’m doing now, I could get thrown in there at any point and it doesn’t matter if I don’t have reps with people. It’s just the nature of the business.”

Hurts looked OK during pregame warmups moving well and even dancing to the music that was being pumped into the Linc.

Flacco learned that he would have to start when the team went back to the locker room after the warmup period.

“Somebody alerted me to the fact that something might be happening,” said Flacco. “Obviously, he went through warmups and things like that, so I didn’t really think too much of it. It’s just the nature of this business. You have to be ready to go at any time.”

Asked how he thought the offense responded to the unexpected adversity, Flacco said: “You just kind of go with the flow. It’s an NFL game. Everybody’s still getting pumped up and getting ready to go, getting their minds right to play an NFL game.

“We came out there and got a couple first downs then kind of hit a wall after that and weren’t able to kind of turn it over and get any momentum going in our favor and it kind of carried through the rest of the night.”

So what’s next for Hurts?

He played just 10 snaps in the preseason opener and none against the Patriots, even though there were two practices that were probably better than game reps.

The Eagles wrap their exhibition slate next Friday at the New York Jets, a preseason game that rarely features any starters playing any snaps.

After that, however, more than two weeks will have passed before the regular-season opener on Sept. 12 in Atlanta.

Ed Kracz is the publisher of SI.com’s Eagle Maven and co-host of the Eagles Unfiltered Podcast. Check out the latest Eagles news at www.SI.com/NFL/Eagles or www.eaglemaven.com and please follow him on Twitter: @kracze.

Well, the writer missed the perfect opportunity for a good headline. "Hurts Hurt" might be a good example.

In what was anticipated for months, tight end Zach Ertz departed from the Philadelphia Eagles after featuring in nine notable seasons with the team. He was traded to the Arizona Cardinals on Friday in a deal that hauled the Eagles cornerback Tay Gowan and a 2022 fifth-round draft pick. Ertz...
NFL・19 HOURS AGO
Sportsnaut

Thus far, the first three games of his sophomore campaign has been up and down for Philadelphia Eagles quarterback Jalen
NFL・16 DAYS AGO
Audacy

With the game in the balance, momentum strongly on the side of the home team, a massive upset just around the corner, and a big play being made, it's every NFL fan's worst nightmare that such a picturesque scenario could be derailed by the referees. And when it's not a pass interference, or facemask, or unnecessary roughness — or any other flag that has a tangible effect on how the game is played — but a taunting penalty that is the impetus for such a momentum-crushing blow, that nightmare becomes even worse.
NFL・2 DAYS AGO
USA TODAY

The Buccaneers' defensive back situation got more precarious when Richard Sherman was ruled out of Thursday night's game against the Eagles.
NFL・2 DAYS AGO

Jalen Hurts’ 4 starts followed a clear pattern. For the sake of the Eagles’ future, he needs to break it. | Mike Sielski

Nothing about Jalen Hurts’ still-short career with the Eagles has been or will be easy. It would be nice, for him and them, if the circumstances that landed him here were different. If the Eagles hadn’t drafted him in the second round last year. If Carson Wentz hadn’t melted down after they did. If Nick Sirianni weren’t as much of a mystery as a brand-new head coach as Hurts was as an NFL starting quarterback. But these are the facts of his life, at least for this season, and they color and shape everything about his present and his future.
NFL・12 DAYS AGO
The Big Lead

Tom Brady threw an interception against the Philadelphia Eagles on Thursday Night Football. Anthony Harris picked off Brady and during the return, Brady got physical with Eagles defensive lineman Derek Barnett. First, let's check out the arm punt. Now here's Brady throwing an elbow into the facemask of Barnett. The...
NFL・2 DAYS AGO
Pro Football Rumors

Despite Ertz being the one viewed as on the way out all year, the Vikings proceeded to contact the Eagles on Goedert’s potential availability, Jeremy Fowler of ESPN.com notes (ESPN+ link). This inquiry came following the news Irv Smith Jr. would be out for the season. Smith’s injury altered the...
NFL・2 DAYS AGO

Eagles’ Jalen Hurts has played like a franchise QB early in his career when compared to Russell Wilson, Deshaun Watson, Carson Wentz

There was a point earlier this year when phones continued to buzz, setting off notifications about the latest rumors surrounding the Eagles and their quarterback position. Stories began to come out before the season questioning whether Jalen Hurts and his potential to be the franchise quarterback, with names like Deshaun Watson and Russell Wilson being floated around in what sounded like a fantasy football wish list.
NFL・12 DAYS AGO
USA TODAY Sports Media Group

Jalen Hurts play through the first four weeks of the 2021 season have eliminated any talk of the Eagles looking to upgrade at quarterback in the future. Hurts has completed 66 percent of his passes, thrown seven touchdowns and two interceptions, with a passer rating of 101.1. The second-year quarterback...
NFL・12 DAYS AGO

Philadelphia will receive cornerback Tay Gowan and a 2022 5th-round pick in return for Zach Ertz, who played for the Eagles for nine seasons.
NFL・2 DAYS AGO
LehighValleyLive.com

Eagles general manager Howie Roseman went to tight end Zach Ertz Tuesday to discuss something with the longtime member of the organization. Roseman knew the time was coming close to grant Ertz his request to be traded, something that Ertz had requested this offseason. After the two had a couple...
NFL・1 DAY AGO
Sports Illustrated

Discover player props odds, plays, and insights for Jalen Hurts in his Week 6 contest with the Philadelphia Eagles against the Tampa Bay Buccaneers.
NFL・2 DAYS AGO
EagleMaven

PHILADELPHIA – Nick Sirianni had never seen Jalen Hurts play as well as he did on Sunday afternoon, the Eagles coach calling it “one of the better quarterback performances I’ve seen.”. Not so fast, Hurts said when asked about what his coach said after the Eagles fell short, 42-30, to...
NFL・13 DAYS AGO
The Spun

If the Philadelphia Eagles are going to rally from another second-half deficit, they will need a lot more from their quarterback Jalen Hurts. For the second game in a row, Hurts and the Philly offense have had a brutal first half. After a touchdown on their opening drive–aided by multiple Tampa Bay penalties–the Eagles have struggled to move the ball. They trail the Bucs 21-7 at intermission.
NFL・2 DAYS AGO
Alt 101.7

Through his first eight starts in the NFL, Jalen Hurts has put up historic numbers. The former Alabama quarterback has accounted for 2,584 yards of offense, the third most in NFL history behind Cam Newton and Patrick Mahomes. Earlier this season, Hurts became the first player in NFL history with 1,000 passing yards and 800 rushing yards in his first five career starts.
NFL・12 DAYS AGO
AL.com

After Philadelphia’s 42-30 loss to the Kansas City Chiefs on Sunday, Eagles coach Nick Sirianni said Jalen Hurts had turned in “one of the better quarterback performances I’ve seen.”. The former Alabama standout had a different take on the game. “Look, we lost,” Hurts said when asked about Sirianni’s assessment...
NFL・13 DAYS AGO
fastphillysports.com

After the Eagles 42-30 loss to the Kansas City Chiefs yesterday, Eagles coach Nick Sirianni said Jalen Hurts had turned in “one of the better quarterback performances I’ve seen.”. Hurts had a different take:. “Look, we lost,” Hurts said when asked about Sirianni’s assessment. “We lost. We lost the game....
NFL・13 DAYS AGO