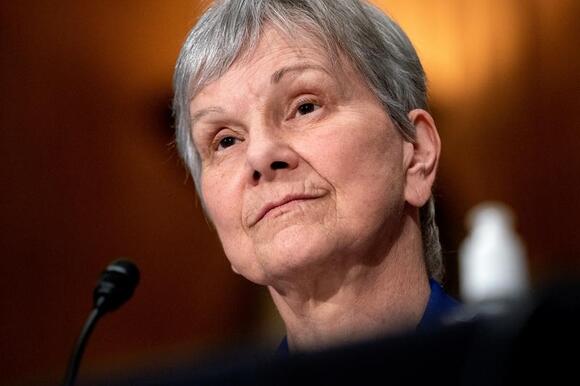 Woodcock, who has served as acting commissioner since Biden took office, has faced firm opposition on Capitol Hill for the job from lawmakers including Democrat Senator Joe Manchin, a key swing vote in the evenly divided chamber, the report said.

Manchin had criticized the agency over the controversial accelerated approval this year of Biogen Inc’s Alzheimer’s drug, Aduhelm, according to the report.

When contacted for comment, an FDA spokesperson referred questions to the White House.

A White House official said no one had been ruled in or out until the nomination was announced.

WASHINGTON, Sept 28 (Reuters) - U.S. President Joe Biden publicly sought out Jackie Walorski, an Indiana Congresswoman who died in a car accident in August, during a conference on hunger on Wednesday, seeming to forget that she had passed away.
INDIANA STATE・1 DAY AGO
Reuters

WASHINGTON, Sept 29 (Reuters) - U.S. President Joe Biden said on Thursday that Hurricane Ian could be Florida's deadliest, adding he would travel to the state when appropriate.
FLORIDA STATE・6 HOURS AGO
Reuters

WASHINGTON, Sept 28 (Reuters) - The U.S. Chamber of Commerce on Wednesday endorsed Republican celebrity physician Mehmet Oz in his campaign for the U.S. Senate seat in Pennsylvania, lauding what it called his "commitment to free enterprise and pro-growth policies."
PENNSYLVANIA STATE・1 DAY AGO

WASHINGTON, Sept 27 (Reuters) - The U.S. Senate planned an initial vote on a stopgap spending measure on Tuesday to keep federal agencies running past the end of this week, while Congress continues to negotiate bills to fund the government through the next fiscal year.
FOREIGN POLICY・2 DAYS AGO
HuffPost

Trump did not want to condemn white supremacists right away during his 2016 campaign. That's according to NYT's Maggie Haberman's forthcoming book, "Confidence Man." Trump told Chris Christie that "a lot of these people vote," referring to white supremacists. Then-2016 Republican presidential candidate Donald Trump did not immediately condemn white...
POTUS・1 DAY AGO
Reuters

U.S. judge does not require Trump to attest that FBI's list of seized records is accurate

WASHINGTON, Sept 29 (Reuters) - A federal judge on Thursday ruled that former President Donald Trump does not have to provide the court with a sworn statement attesting to whether he believes the list of items seized by the FBI from his Florida estate is accurate and complete.
POTUS・5 HOURS AGO

NEW YORK, Sept 27 (Reuters) - A federal appeals court set aside a judge's ruling that Donald Trump could be sued for defamation by E. Jean Carroll after denying he raped her, though it stopped short of declaring the former U.S. president immune from the author's lawsuit.
PUBLIC SAFETY・2 DAYS AGO
Reuters

Sept 28 (Reuters) - The U.S. Supreme Court last March rebuffed an emergency request by North Carolina Republicans to allow the use in November's congressional elections of an electoral map they drew that a lower court invalidated for unlawfully disadvantaging Democrats.
CONGRESS & COURTS・21 HOURS AGO
Newsweek

Cruz's tweet was in response to a clip of Senator Amy Klobuchar saying that Hurricane Ian is a reason why voters should back Democrats in the midterms.
FLORIDA STATE・2 DAYS AGO
Reuters

Democratic ex-cop Demings closes in on Republican Rubio in Florida

Sept 28 (Reuters) - Lawyers for former President Donald Trump are resisting a federal judge's instruction to submit a sworn declaration on whether they believe the government's list of property taken from Trump's Florida estate is accurate.
FLORIDA STATE・16 HOURS AGO
Reuters

WASHINGTON, Sept 27 (Reuters) - "Yes," U.S. forces will defend Taiwan if it is invaded by China. Russian President Vladimir Putin is a "butcher" who "cannot remain in power." And the COVID-19 pandemic is "over."
PRESIDENTIAL ELECTION・2 DAYS AGO
Reuters

WASHINGTON, Sept 29 (Reuters) - A former U.S. Army major and his anesthesiologist wife have been criminally charged for allegedly plotting to leak highly sensitive healthcare data about military patients to Russia, the Justice Department revealed on Thursday.
HEALTH・5 HOURS AGO
Reuters

MOSCOW, Sept 29 (Reuters) - Russia said on Thursday it was studying the possibility of a face-to-face meeting between Russian and U.S. negotiators on a landmark nuclear arms control treaty.
POLITICS・12 HOURS AGO
Reuters