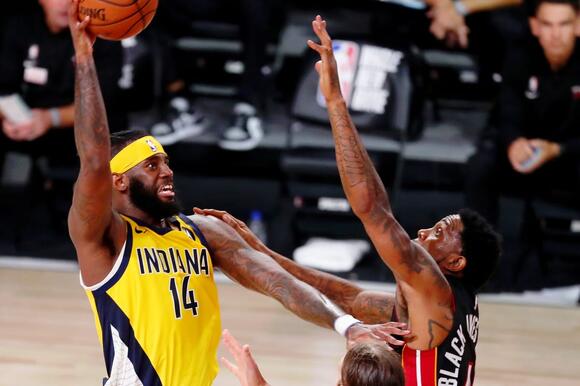 It seems ever unlikely Paul Millsap or Lauri Markkanen is coming to Portland. Who could the Blazers realistically target for their final roster spot?

The Trail Blazers, remember, plan to enter the 2021-22 season with 14 players on the roster, according to Jason Quick of The Athletic .

Signing Greg Brown III to a three-year deal earlier this week left Portland one guaranteed contract shy of that total, and their underwhelming play at Summer League made clear that the Blazers' final roster spot—despite some public expectations otherwise—isn't earmarked for Michael Beasley, Kenneth Faried of Emmanuel Mudiay.

Unfortunately, Paul Millsap seems just as if not more unlikely to fill that slot as any of Portland's summer veterans. He no doubt has his pick among upper-rung title contenders for the minimum, and could still sign somewhere for the full taxpayer's mid-level exception—an option no longer available to the Blazers after dipping into it to get an extra year on Brown's contract.

Lauri Markkanen is the other big name still available, and Portland indeed has the tidy potential matching salary of Derrick Jones Jr. to include in a theoretical sign-and-trade with the Chicago Bulls. But would Neil Olshey really feel comfortable affording Chicago the sweetener of a future first-round pick to facilitate the acquisition of Markkanen?

The inherent defensive issues Markkanen brings to the table, not to mention his checkered injury history, only casts further doubt on that possibility. Bringing him in via sign-and-trade would hard-cap Portland at approximately $143 million, adding another hurdle for Olshey and the front office to clear in prospective trade talks involving CJ McCollum or Damian Lillard.

If Millsap and Markkanen really are out of the picture, who might the Blazers target for their 14th and final roster spot?

Though hardly impact players or even back-end rotation options on a nightly basis, the free-agent bigs below would still help Portland address its troubling lack of depth up front—and crucially, keep Jody Allen's luxury tax bill low by signing for the minimum.

Sampson wouldn't answer the increasingly loud calls for the Blazers to add height to the roster. His signing would still leave Jusuf Nurkic, Cody Zeller and Robert Covington as Portland's only players 6-foot-8 or taller.

But Sampson's length, athleticism and activity have always allowed him to play bigger than his listed size, and much of his court time for the Indiana Pacers over the last two seasons came as a small-ball five. Chauncey Billups may only downsize against specific opponents and under certain instances of time and score in 2021-22, but the Blazers could use an extra horse for those lineups regardless.

Hopes of Sampson developing legitimate three-point range died a few years ago. Notable dips in dunks and accuracy at the rim last season could be signs of athletic decline as he approaches 30. Regardless, Sampson's ability to check multiple positions while providing some semblance of paint protection, screen-setting and rim-running would make him a shrewd final addition for Portland.

An intriguing long-term fit next to Giannis Antetokounmpo in the Milwaukee Bucks frontcourt after his rookie season, Wilson has since failed to make good on that two-way promise he showed in 2017-18. He finally got some consistent burn last season following a midseason trade to the tanking Houston Rockets, but did little to indicate he was a surefire NBA player.

Still, it's not like the blend of length and shooting ability that made Wilson the No. 17 pick of the 2017 draft has vanished entirely. The problem for Wilson is that his jumper hasn't been falling, ensuring his overall aversion to physicality is magnified all the more.

His offensive skills best utilized at center but clearly more comfortable playing power forward, Wilson could give Portland a dose of shooting stretch and scoring dynamism it lacks up front. Defense is the focus for Billups, though, and being forced to count on Wilson for minutes if Nurkic again goes down with injury doesn't align with that emphasis.

But based on that sliver of remaining upside alone, Wilson wouldn't be a bad minimum flier.

Boring as it would be, perhaps the most logical use of the Blazers' fourteenth roster spot would be on a traditional center. Zeller is nearly as big an injury risk as Nurkic. It wouldn't be at all shocking if they were sidelined simultaneously this season.

Biyombo can't score outside the restricted area, reached new depths at the free throw line last season and still has hands of relative stone. Any time he puts the ball on the floor or is asked to handoff to a teammate could be an adventure that results in a turnover.

Biyombo's ridiculous 7-foot-6 wingspan still looms even as his vertical pop somewhat dissipates, though. He remains an above-average rim-protector with time and space to load up, surrendering 55.6 percent shooting from the restricted area last season, per NBA.com/stats —a hair better than Nurkic.

Third centers wih Biyombo's playing profile aren't hard to come by. But his wealth of experience and quantified defensive impact, combined with the injury histories of Nurkic and Zeller, could make him a worthy priority for Portland anyway.