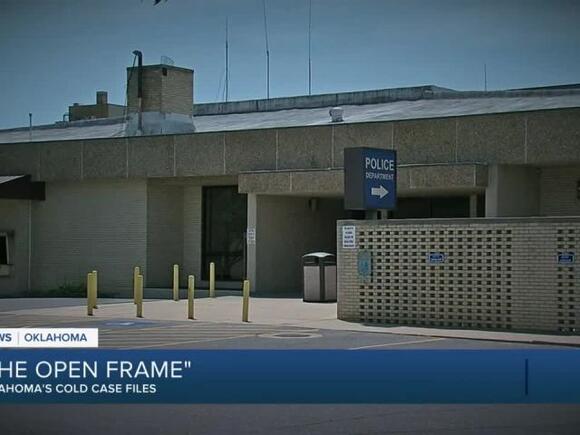 Sandy Rae disappeared from a bowling alley in September 1984. The 17-year-old Shawnee native is still missing.

It's been four decades, but her family's search for any clue about what happened to her hasn't ended.

Sandy and her younger sister Brandy Winkleman shared a special bond. "She was kind of like a second mom to me."

Today, Winkleman holds on to the simple things her big sister would do, "her sitting there braiding my hair and she used to sing this song 'Delta Dawn' to me all the time."

Her cousin Johnny Price said Sandy caught everyone's attention, "if she walked in a room, you could bet she was smiling."

Brandy remembers the day, "she left to go to the bowling alley to visit my cousin."

Sandy left the bowling alley and hasn't been seen since. Her mother called Shawnee Police Department, but they chose not to search for her or interview witnesses.

"They had considered her a runaway and um, that she had left on her own accord," Winkleman said.

Price said his cousin would never walk away from her family, "I would bet my life on it that she would never go away and never return."

Winkleman said her childhood ended the day her sister vanished. "That was my childhood, digging and searching through, you know, a lot of this, every creek bed, every bridge."

Now, the Shawnee Police Department is investigating Sandy Rae's disappearance as a cold case. If you have any information, contact them at 405-273-2121.

Stay in touch with us anytime, anywhere --

How moving turned into a nightmare for a Broken Arrow woman

A family from Minnesota dreamed of the day they would move to Oklahoma, but that move turned into a nightmare.
BROKEN ARROW, OK・1 DAY AGO

Two Union students have been suspended after they shot at least 12 students and two teachers with a plastic Airsoft gun on Tuesday, Union Public Schools.
TULSA, OK・3 DAYS AGO
2 News Oklahoma KJRH Tulsa

Police arrested a man at a Tulsa Walmart after a standoff that lasted several hours on Tuesday afternoon.
TULSA, OK・4 DAYS AGO

Green Country Ghosts: the most haunted places across Tulsa

Tulsa is known for many things, but even Tulsans might be surprised by the city's unexpected, haunted history.
TULSA, OK・2 DAYS AGO
2 News Oklahoma KJRH Tulsa

Tulsa lawyer weighs in on legality of vaccine mandate

The Tulsa Police Department is reporting a dramatic increase in traffic fatalities on city streets.
TULSA, OK・5 DAYS AGO

The City of Tulsa and Tulsa County both announced Monday that they'd be adding Juneteenth as an official holiday beginning next year.
TULSA COUNTY, OK・5 DAYS AGO
2 News Oklahoma KJRH Tulsa

Tulsa police say a 19-year-old is in the hospital after protecting his sister during a shooting at a south Tulsa apartment complex.
TULSA, OK・5 DAYS AGO
2 News Oklahoma KJRH Tulsa

TPD was made aware of a video from a Ring doorbell camera showing a man severely beating and stomping a dog
TULSA, OK・7 DAYS AGO
2 News Oklahoma KJRH Tulsa

This is an active investigation, we will update as more information becomes available.
OKLAHOMA STATE・7 DAYS AGO