Report: Blazers to Host Kings in Season-Opener on October 20 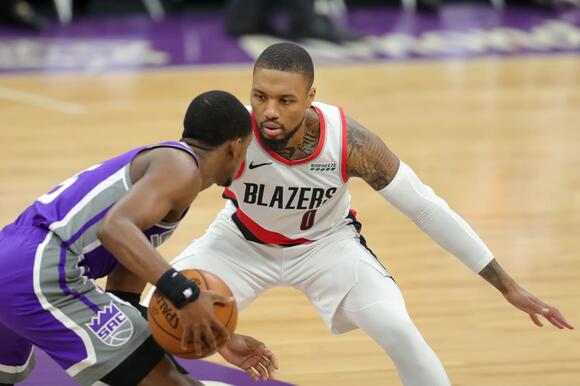 Connecting the dots via The Athletic's Jason Jones means the Blazers will open 2021-22 at home against the Kings.

The Trail Blazers' first game under rookie head coach Chauncey Billups, it appears, is one they should win.

Jason Jones of The Athletic reported on Thursday that the Sacramento Kings will tip-off next season in Portland on October 20.

Though the NBA has yet to unveil the full regular-season schedule for 2021-22, the league released its nationally-televised matchups for debut week on Tuesday.

The Blazers, unsurprisingly, weren't slated to play on opening night, October 19, which combined with Jones' reporting means Portland will begin the season at Moda Center versus the Kings 24 hours later.

The Kings, 31-41 last season and the only team in basketball with a worse defensive rating than the Blazers, enter 2021-22 having missed the playoffs 15 years running. That's not just the league's longest active drought by a full decade, but ties the longest stretch a team has gone without making the playoffs in NBA history.

Odds are Sacramento owns that infamy by itself come spring. The Kings return the same core as a year ago, and their most significant offseason addition, No. 9 overall pick and Summer League co-MVP Davion Mitchell, is best at the same position as franchise cornerstone De'Aaron Fox and promising sophomore Tyrese Haliburton.

Sacramento has talked of starting the 6-foot-1 Mitchell alongside its star guards, his game-changing defensive chops and unwavering intensity accounting for that obvious lack of individual and collective size. Portland, of course, is less equipped to take advantage than most teams, suffering from a similar three-guard affliction.

Regardless, how Billups looks to exploit it in his first game as a head coach will be a fascinating lens into Portland's updated schemes and overall ethos offensively. And even though a loss would have pretty much no bearing on the Blazers' long-term prospects in 2021-22, anything less than an opening-night victory at home against an opponent like the Kings would be met with widespread disappointment locally.