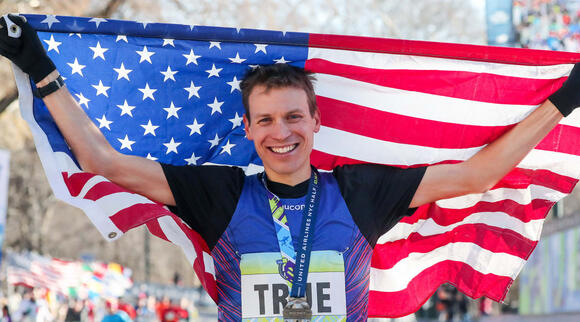 Ben True explains why he's at peace with another near-miss at making the Olympics and now moving up to the marathon.

There is plenty of agony and disappointment that comes with near misses in running, especially when there are spots for an Olympic or world championship team on the line. At U.S. championships, typically the top three men and women who finish in their respective race or event and have hit the requisite qualifying time will go on to wear the red, white and blue at a global championship. The rest of the field returns home to training with varying degrees of heartbreak.

For Ben True, the list of close calls at U.S. championships or Olympic Trials is long.

When something has caused so much hurt, how is there any love left for the sport?

The latest bit of agony was another fourth place finish at the 10,000 meters at the 2021 Olympic Trials where, aside from a five-minute conversation over Zoom with a handful of media members, he didn’t offer much of an explanation as to what exactly went wrong.

True did a winter training camp in Charlottesville, Virginia to prepare for the Trials, where he managed to get very fit for early-season races but believes it later led to a hip issue that impacted his performance at two meets in May while tuning up for what was possibly his final Olympic bid at 35 years old.

“I was grasping for straws trying to make sure that I was fully recovered for the Trials but trying to remember how to have that pace in my legs,” True says. “I definitely wasn’t in my top A-form at the Trials and that was something that you needed. Those guys ahead of me were extremely fit, ready and fast. I just didn’t have it. If the race was faster the whole way through, I think I would have done a better job but I just wasn’t ready to have that closing speed.”

True’s final lap was still a respectable 58.63 seconds and he finished in 27:58.88 – just four seconds back of Joe Klecker for the final spot to Tokyo. The top three finishers all closed in less than 55 seconds. After the race, it was clear the race aggravated True’s hip injury, his knee was swollen, and his adductors flared up. He sought treatment to try and bounce back for the preliminary round of the 5,0000 meters six days later.

He tried to go on a 20-minute jog but the pain continued to throb. He went to a track to try and do a few strides but couldn’t run 100 meters to try and get up to pace. His leg would just lock down and he had to stop. He scratched from the race and would have to watch the Tokyo Olympics from home.

“In the past, a lot of those times when I’ve just missed the team or just been outkicked, I’ve felt that on that day and in those performances, I had messed up and had not shown my fitness for the day. I was fitter and better than I was from that result,” True says. “This time around and the struggle that I had for two months to get to that starting line, that is what I had. The three guys who beat me were just better on that day. When that happens, it’s harder to get down on yourself or think of it differently.”

Nearly two months after leaving Hayward Field, True is back at home in Hanover, New Hampshire and has made his peace with the result. In mid-July, he and his wife, Olympic triathlete Sarah True (née Groff), welcomed their first child . Mercifully, his sleep hasn’t been interrupted too much yet during these early stages of marathon training. In addition to the father title, True is working toward adding “marathoner” to his bio and will be among the top Americans to watch in November’s New York City Marathon.

Well-known in the professional running community for his lone wolf routine in Hanover over the years, True has added some company for his marathon training block with former Iowa State standout Dan Curts (whom True paid $20,000 out of his own pocket to train with him in 2020) and former Washington runner Fred Huxham. True’s contract with Saucony ended at the end of 2020 and he’s competed unsponsored throughout 2021 so without any salary to compete, he’s no longer paying Curts but the duo has stayed to train in Hanover as friends. True trades his wisdom as a professional runner for the past 12 years for their youthful energy and camaraderie.

“If it wasn’t for Dan and Fred coming up to New Hampshire and training with me, my career definitely would’ve been over,” True says. “There’s no doubt about that in my mind. I’m actually shocked that I kept running as long as I did while running by myself. Every time you get that new energy and new excitement, you’re able to turn the sport into fun instead of hard work, drudgery, pain and lonely miles. It re-sparks the reason why you like to run.”

Track and field offers a wide variety of distances for the everyday sports fan to enjoy. The 100 meters displays raw speed and power. The 1,500 or mile blends a fast tempo with positioning and tactics. The marathon offers relatability as it’s a distance since hundreds of thousands of everyday runners tackle each year, but it also requires healthy measures of aerobic fitness and mental discipline. For years, there’s been speculation about True’s potential to one day become a top American marathoner.

True owns personal bests of 13:02.75 for 5,000 meters and 27:14.95 on the track. He won five U.S. titles on the road from 2011 to 2014 in distances ranging from 5K to 15K. In his half marathon debut in March 2018, True won the NYC Half in 62:39. New York’s marathon course with five bridges also could favor someone with cross country strength - True owns a sixth-place finish at the 2013 world cross country championships. (As a bonus, he’s also hoping for some New York City magic since it’s the site of his road mile and indoor track two-mile personal bests) However, with the marathon, there’s no perfect equation for success, as any number of factors can make this all simply wishful thinking.

“I’ve always been seen as a grinder,” True says. “The marathon is a whole different level of grinder. It’s not very fast – it's all relative. It’s just holding that threshold for as long as possible. It’s a different type of race. The biggest difference for me is looking at workouts and thinking,’Woah those paces are so slow.’ But then you do enough of it and you start to see what’s going on.”

True is working remotely with coach Ray Treacy, who has coached Olympians Molly Huddle and Emily Sisson to successful track to marathon transitions. His training has not been markedly different from his 10,000 meter training yet, just with more volume and slower “race pace” intervals.

“If you look at two athletes who have consistently done really well and consistently been very well-prepared and strong, Molly and Emily are at the top of the list,” True says. “They’ve never been ones that you think would have a blazing fast last lap or final sprint but they’re the ones that are going to run the legs out of you in the last kilometer of a race. Knowing that his workouts play to that strength will be even more helpful for me in the marathon.”

After a decade of triumph and heartbreak at 5,000 and 10,000, the opportunity to try something new may be just what the doctor ordered. 35 is considered older by track standards, but many distance runners find their marathon prime in their mid-thirties. And with two world championships and an Olympics coming up over the next three years, all of a sudden, Ben True’s future seems rife with possibility.

Fishermen Team Accused of Cheating by Stuffing Fish With Weights

The duo was stripped of their winning title after a tournament official discovered the weights.
PENNSYLVANIA STATE・2 DAYS AGO
Sports Illustrated

The six teams have punched their playoff tickets, and OL Reign has won the Shield. Now comes the chase for the title.
SOCCER・1 DAY AGO
Sports Illustrated

The Great Muta and Sting Will Reunite One Last Time

More than 30 years after their first match, the two icons will team up for Muta’s retirement match in Japan.
WWE・11 HOURS AGO