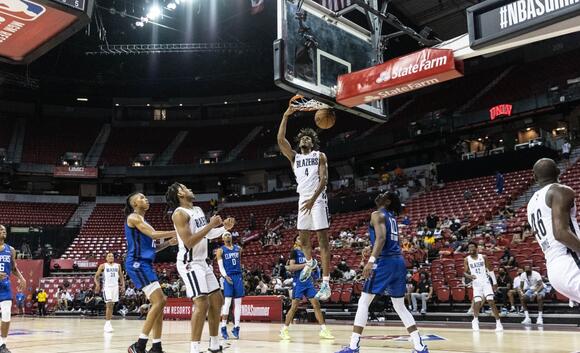 What did Portland learn about Greg Brown, CJ Elleby and more at Summer League? These are five lessons the Blazers can take from Sin City.

After winning their first two games by double-digits, living up to mini-camp talk of a Summer League title, the Trail Blazers left Las Vegas losers of three straight. But summer basketball, of course, is a game where individual player process looms much, much larger than final-score results.

Greg Brown is a Freak Athlete—Even by NBA Standards

The Blazers bought the No. 43 overall pick on draft night precisely due to the untapped upside Brown's athletic profile provides. Still, even Neil Olshey, ever proud of his second-round diamonds in the rough, might be forced to admit the level of vertical pop and quick-twitch dexterity Brown displayed on a game-by-game basis at Summer League caught him by surprise.

It wasn't just his viral between-the-legs dunk that dropped jaws, either. Brown was a pogo stick finishing lobs and high-pointing defensive rebounds around the rim. He was a terror running the wing in transition when he reached full speed, and exploded off the hardwood for multiple blocks that showed his elite ability to both cover ground and get off it in a hurry.

Brown's hips don't seem especially fluid, a relative deficiency manifested mostly on defense at Summer League—and could be fixed by a sustained commitment to playing lower. He needs additional girth and strength almost as much as he does wholesale skill development offensively.

Still, every flash of Brown's otherworldly physical tools in Las Vegas made it abundantly clear why he was a consensus top-10 prospect in the loaded high school Class of 2020, and has the chance to be an impact player for Portland down the line.

Elleby ripped off a quick seven points in Portland's Summer League finale, a hopeful sign that his immense prior struggles could at least be partially explained by small sample size. It didn't last long.

Elleby ended with 13 points on as many shots in the Blazers' loss to the Houston Rockets , contributing to their late-game collapse with an ugly backcourt turnover—hardly the first time in Sin City he lost his dribble in traffic.

It bears stressing that Elleby is the type of player at his best surrounded by teammates clearly better than him. His idealized NBA role was never going to be as even a secondary creator, let alone backup primary ball handler.

But those jack-of-all-trades role players normally possess at least one attribute a coach can count on, ably plugging gaps elsewhere. What's Elleby's?

His strong rebounding instincts aren't enough, and his average combination of size and athleticism, at best, will prevent him from being anything close to a stopper. The jumper, still coming off an elongated, low-starting release, didn't look at all improved in Summer League.

The Blazers were never going to earmark Elleby for even deep rotation minutes in 2021-22. After Las Vegas, though, it's obvious Olshey would be wise to add a veteran guard in the case of injury rather than count on Elleby to temporarily pick up the slack.

The Veterans Aren't the Answer

A damning aspect of Elleby's struggles is that they mostly came in a vacuum. Michael Beasley, Kenneth Faried, Emmanuel Mudiay and Portland's other summer veterans weren't efficient offensively or airtight defensively, but still played enough within the team concept on both ends to allow their teammates to thrive.

Unfortunately for the Blazers' older journeymen, their commitment to winning alone was never going to be enough to get them a roster spot.

Beasley, out of the league since testing positive for COVID-19 before entering the NBA bubble, showed nothing new to indicate he's worth another chance in the league. The same goes for Faried, an even clunkier fit for the modern NBA now that age has further sapped him athletically. Mudiay had his moments with the ball, but still did little to separate himself from other veteran floor generals left unsigned.

The notion that Portland would use its final planned slot on the roster with Beasley, Faried or Mudiay, uplifting a story as that would have been, was always foolish. They were most likely in Las Vegas as personal favors to specific agents and to ensure the Blazers, lacking young, unproven talent compared to most of the league, would field a competitive Summer League squad. Nothing more.

Kudos to Beasley, Faried and Mudiay, though. They clearly helped set a tone of professionalism and competitiveness for Portland.

Trendon Watford is the Wrong Type of 'Tweener

It's key to remember that Watford, the Blazers' two-way player for 2021-22, went undrafted.

If he projected as even a surefire end-of-bench player over two productive, accomplished seasons at LSU, Watford would've heard his name called on draft night. There's been no reporting to suggest he was especially sought after on the undrafted free agent market, either.

Summer League laid bare the main reason behind those implicit doubts about his long-term NBA viability: Watford is stuck squarely between positions up front, and the skill development it would take for him to overcome that sticking point is tough to fathom.

Watford's 7-foot-2 plus wingspan is enormous, and indeed helps him somewhat compensate for an otherwise lagging physical profile. But standing reach is more important than wingspan for centers, especially short ones, and Watford's measured 8-foot-9 at the NBA combine—same as Golden State Warriors wing Moses Moody.

He just doesn't have the necessary size and explosion to protect the rim, nor the natural foot speed to chase shooters around the arc or switch onto perimeter ball handlers. Some players, like Kelly Olynyk, have carved out legitimate, long-lasting NBA careers despite falling under that same category.

Watford actually has some of that innate creativity to his game offensively, with a slick handle and keen understanding of timing and angles. But it's the long-range shooting ability that's kept Olynyk around, and Watford attempted just four threes in Las Vegas. He was also a middling free throw shooter in Baton Rouge, casting further doubt on his potential from deep.

Maybe Watford gets in better shape, tightens his jumper and eventually wills his way to the league on a permanent basis with guile, hustle and productivity in the G-League. That such a possibility exists makes him worth a two-way flier, but odds are that Watford's physical limitations keep him from emerging as something more for Portland.

A ball-dominant, sparkplug scorer off the bench for the Chicago Bulls in 2018-19, Blakeney looked every bit the part from start to finish at Summer League. He was the eighth-most productive per-minute scorer in Las Vegas, shooting 55.6 percent from the floor on a steady diet of difficult attempts from all over the floor.

Blakeney isn't a defender. It wasn't exactly shocking that Armoni Brooks, red hot, shook free of him for the game-winning three in Portland's summer finale. He also totaled two assists for the Blazers, a whopping seven fewer than Beasley—not exactly interested in finding the open man himself.

Those are the same weaknesses that have long defined Blakeney's game, though. If any team wants some break-glass-in-case-of-emergency scoring punch, it could definitely do worse than Blakeney.

The Seminoles will be without one of their most coveted transfers for the season.
TALLAHASSEE, FL・18 MINUTES AGO
San Diego Union-Tribune

Thompson-Robinson, No. 18 UCLA hurdling over expectations

UCLA quarterback Dorian Thompson-Robinson and the Bruins are ranked 18th going into Saturday's game against No. 11 Utah
LOS ANGELES, CA・14 MINUTES AGO