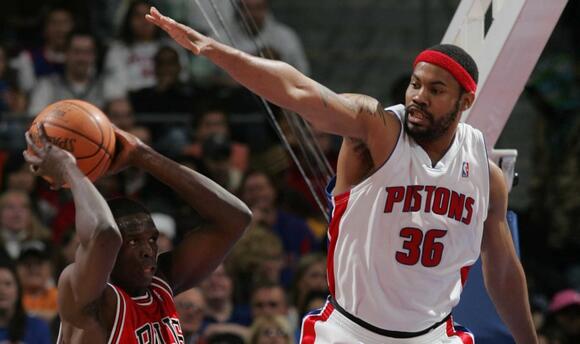 Who better than Rasheed Wallace to teach talented, impressionable teenagers about the tenets of "Ball don't lie?"

According to Shams Charania of The Athletic , the Trail Blazers' former All-Star big man has joined Penny Hardaway's staff at the University of Memphis as an assistant coach.

The No. 4 overall pick of the 1995 NBA draft, Wallace came to Portland in a trade for Rod Strickland after spending his rookie season with the Washington Bullets. He played the next seven-and-a-half seasons with the Blazers, establishing himself as one of the league's most impactful—not to mention intense—two-way bigs.

Wallace made his first of consecutive All-Star appearances in 1999-2000, the same season Portland surrendered a double-digit lead to the eventual champion Los Angeles Lakers in Game 7 of the Western Conference Finals.

His tenure with the Blazers came to an end in 2004, when Wallace was dealt to the Atlanta Hawks. He was quickly traded again, this time to the Detroit Pistons, proving the final piece teammate Chauncey Billups and company needed to win the Larry O'Brien Trophy just a few months later.

Wallace retired for good in 2013 following a 16-year playing career. His first experience as a coach came the following year under Stan Van Gundy in Detroit, but Wallace wasn't retained for the 2014-15 season.

In 2019, Wallace took over as head coach of Charles E. Jordan High School in Durham, North Carolina, not far from his alma mater in Chapel Hill. The 46-year-old joins a Memphis staff that includes not just Hardaway, but also Hall-of-Fame coach Larry Brown.

There are cupcake games on many schools’ schedules. It is rare when one gets so out of hand that coaches agree to boil the quarters in the second half to 10 minutes each. That is what happened on Saturday when Syracuse played host to Wagner. With the score 49-0...
SYRACUSE, NY・21 MINUTES AGO
The Associated Press

Mississippi St. forces 4 turnovers to roll No. 17 Texas AM

STARKVILLE, Miss. (AP) — The Bulldogs forced No. 17 Texas A&M into four turnovers, including three inside the red zone, and took advantage in a 42-24 victory on Saturday. Decamerion Richardson scooped up Emmanuel Forbes’ critical third-quarter blocked field goal and returned it 50 yards for the touchdown to give the Bulldogs a 21-3 lead. The Aggies (3-2, 1-1 Southeastern Conference) got no closer to 11 as MSU’s defense denied A&M inside the 20 all game long with big plays inside its 20. The first came early in the second quarter when Devon Achane fumbled on the 6. MSU responded with a 94-yard, 11-play drive ending with Will Rogers’ 5-yard touchdown pass to Rufus Harvey. Leading 14-0 just before halftime, the Bulldogs defense came through again as Nathaniel Watson forced Aggies quarterback Max Johnson to fumble inside the red zone. Forbes’ blocked field goal in the third quarter put an exclamation point on the game for MSU and their first SEC West win.
STARKVILLE, MS・28 MINUTES AGO
USA TODAY Sports Media Group

In one of the strangest, most momentum-swinging games you have ever seen, No. 2 Alabama went on the road and defeated the Arkansas Razorbacks 49-26. The Crimson Tide would come out of the gates on fire and quickly jumped on the Hogs 14-0. Then, one of the scariest moments of the college football season happened when star quarterback Bryce Young exited the contest with a shoulder injury.
TUSCALOOSA, AL・25 MINUTES AGO