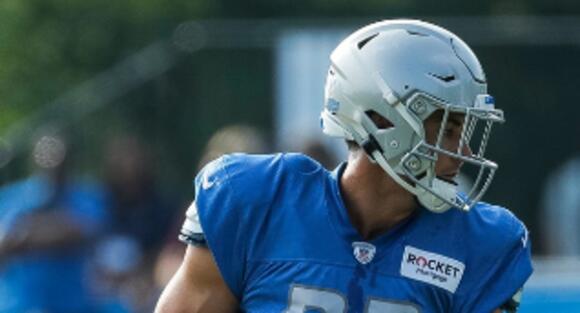 The notion that quarterback Jared Goff and wide receiver Chad Hansen would become the passing combination in Detroit that they had been as Cal teammates was destroyed Tuesday when the Lions waived Hansen with an injury settlement.

Hansen was a long shot to make the Lions roster, but when he suffered an unspecified injury last week that prevented him from practicing since then, his fate was sealed.

He did not play at all in Detroit’s first preseason game on Friday, and was let go as the Lions got downs to the 85-player limit before Tuesday’s deadline.

Hansen had established a name for himself in 2020, when he played in five games, including two starts, for the Houston Texans. He recorded 17 catches for 236 yards and one touchdown, and in the Dec. 6 game against the Colts he had five catches for 101 yards.

The Texans released him after the season, but the Lions signed him on June 18.

It is significant that the Lions waived him with an injury settlement.

Injury settlements are agreements between players and teams spelling out compensation and other terms in which the two parties will immediately part ways.

For example, if a player suffered a preseason injury such as an MCL partial tear, it usually takes about six weeks to heal and for the player to get back to full strength. If the player sustained the injury in the final week of the preseason (seven days prior to the 53-player cut-down date) and all parties agreed it would take six weeks for a full recovery, the parties may agree on a five-week regular game settlement.

A five-week settlement is appropriate because the first week of the six weeks is still during the preseason. Thus, the player would likely have missed five weeks of the regular season on the inactive or the injured reserve list. Therefore, the team will pay the player for those five weeks in exchange for releasing the team of liability. So the player will be paid 5/17th of his salary (there are 17 weeks in the season.)

The Lions season opener is not until September 12, and Hansen apparently was injured about four weeks before the start of the regular-season. But Hansen’s injury may have been significant enough that it would have kept him out of at least one regular-season game. The number of regular-season games he was projected to miss would determine the amount of his injury settlement.

Hansen is a free agent and can look to sign with another team when he becomes healthy again.

Hansen had 92 receptions for 1,249 yards and 11 touchdowns in 2016, before leaving after his junior year to enter the NFL draft. He was a fourth-round pick of the New York Jets in the 2017 draft, but he had just nine receptions in regular-season games before his 2020 breakout season.

A Scenario That Would Drive Cal Fans Crazy: Troy Taylor as Stanford's Next Coach

David Shaw shared his big news late Saturday night after Stanford’s season-ending loss to BYU: He has resigned after 12 seasons as the Cardinal coach. The speculation over his successor began immediately, of course, and there is a long list of names being circulated, including the likes of Chris Petersen, Dave Aranda and Bill O’Brien.
STANFORD, CA・20 HOURS AGO
CalSportsReport

Joe Starkey, Voice of the Bears, Signs Off For the Last Time: `Tough to Say Goodbye'

On the busiest day of one of the busiest weeks of Joe Starkey’s broadcaster life, his partner in the booth, former Cal quarterback Mike Pawlawski, quipped, “Not every day’s a Joe Starkey Day.”. Said Starkey: “Thank God.”. Starkey, working his 550th and final Cal football game...
2 DAYS AGO
USA TODAY Sports Media Group

If the Oregon Ducks were an actual stock, then the people who were left holding their shares after Saturday’s game against the Oregon State Beavers would be in a world of hurt. Not only were those stakeholders left holding onto a bunch of stock for a team that is likely going to the Holiday Bowl, or the Alamo Bowl, but you can guess that the same stakeholders were likely pretty ambitious early on in that third quarter, buying up as much stock as they could with it looking like the Ducks were headed to Las Vegas for a matchup with the...
EUGENE, OR・13 MINUTES AGO
CalSportsReport

Cal Basketball: Men Fall to 0-7; Women Win Their Fourth in a Row

Cal Basketball Cannot Find A Victory Across the Country in Florida