Tracking a trio of tropical systems: Latest forecasts for Fred, Grace and Henri 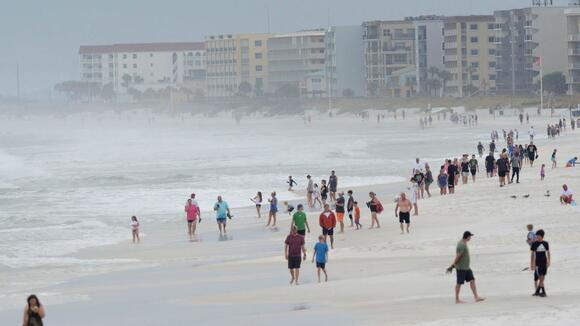 There's a trio of tropical systems in the Atlantic Basin, with Fred moving up the East Coast as Grace hits Haiti and Henri churns near Bermuda.

Fred made landfall on the Florida Panhandle Monday afternoon, leading to flooding as Panama City saw 10 inches of rain.

President Joe Biden approved an emergency declaration for Florida due to Fred's flooding.

Fred has now weakened to a tropical depression over Georgia, but the heavy rain should continue from Georgia to the Carolinas and into Virginia.

There's a high risk of flooding for the Southern Appalachians Tuesday as Fred moves north.

The heavy rainfall likely will stretch into the Northeast Wednesday afternoon into Thursday, with 6 inches of rain possible in Pennsylvania, New Jersey and New York. Flash flooding is possible for major cities including Philadelphia and New York City.

Tropical Storm Grace is now leaving Haiti, where it dumped heavy rain that lead to flash flooding in a nation already reeling from an earthquake this weekend that's killed over 1,400.

MORE: How to help those devastated by earthquake in Haiti

Grace should move over Jamaica Tuesday and into the western Caribbean Sea by Thursday before approaching Mexico's Yucatan Peninsulas as a strong tropical storm or possibly a Category 1 hurricane.

Grace is not expected to threaten the U.S. but Mexico could see flash flooding.

Henri is forecast to circle Bermuda over the next few days, providing gusty winds and some rain.

The U.S. likely will only see minor impacts from Henri, with high surf and rip currents along the East Coast.

Helping the East End Tigers get from Virginia to Florida

CBS 6 Sports Director Lane Casadonte helped the 9u East End Tigers in their effort to get to Florida.
RICHMOND, VA・12 MINUTES AGO
Axios

Data: The George W. Bush Institute; Map: Alice Feng/AxiosImmigrants who are already living in the United States are choosing more affordable metros for their "second move." A new report by the Bush Institute lists Cedar Rapids as one of the best places for them to go.The living standards for immigrants in Cedar Rapids are comparable to the country's 25 largest metros, according to the report.Why it matters: In recent decades, immigrants in the U.S. have increasingly chosen to live in smaller cities and more suburban areas — spreading demographic and social change across the country, writes Axios' Stef Kight.Immigration into...
CEDAR RAPIDS, IA・14 MINUTES AGO