By Matt Johnson
Sportsnaut
10 days ago 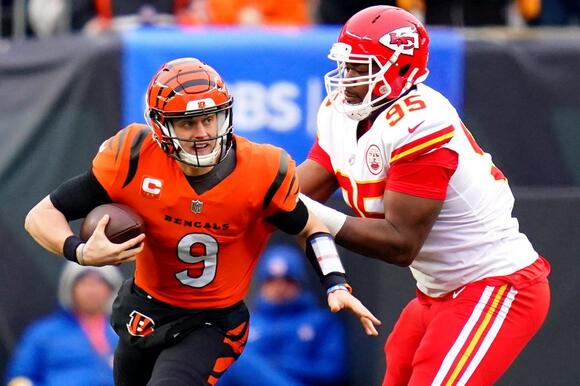 The NFL injury report is always filled with some of the game’s best stars, leaving fans and fantasy football managers scrambling to find out who will play. Heading into Week 18, Baltimore Ravens quarterback Lamar Jackson and Cincinnati Bengals quarterback Joe Burrow headline a long list of stars on the latest NFL injury report.

Bookmark this page for daily injury updates and news on NFL stars from across the league, whether or not they will play in Week 18 and how their injury impacts fantasy football

Here is the latest injury news for some of the NFL’s biggest stars and the impact it will have on Week 18.

Baltimore Ravens quarterback Lamar Jackson hasn’t returned to the field since suffering an ankle injury in Week 14. Originally described as a low ankle sprain, Jackson didn’t even practice on a limited basis until last Wednesday. A day later, he was still bothered by the injury. Despite having a chance to reach the playoffs, Jackson will be OUT this week, Tyler Huntley will start the fourth game of his NFL career.

While Jimmy Garoppolo played through a thumb injury in Week 16, further examination later revealed a torn UCL. He sat out Week 17, giving San Francisco an opportunity to see how far along Trey Lance is in his development. But ESPN’s Adam Schefter reports the 49ers are optimistic Garoppolo plays in Week 18 and they’ll need him with the playoffs just around the corner. Jimmy G is expected to play .

Shortly after getting his nameplate ripped off, Joe Burrow suffered a scary-looking injury on the game-winning drive against the Kansas City Chiefs. The Cincinnati Bengals quarterback got his right knee twisted, leading to concern about his availability before the playoffs. Fortunately, Burrow told reporters it’s just a small aggravation of a previous injury and he is ready to play the next game. But, without much to play for, the Bengals will rest Burrow in Week 18 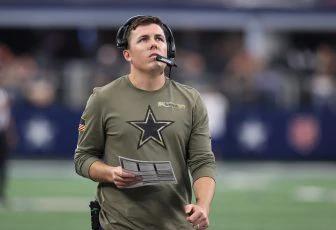 Jared Goff has missed the past three weeks with a knee injury, but he’s returned to practice in a limited form this week. Goff is active to face the Green Bay Packers, who could eventually rest some players with nothing to play for.

Although he finished Week 17 and didn’t appear to miss any time during the game, Aaron Jones is listed as OUT for Sunday’s regular-season finale. The star tailback is dealing with a knee injury, but it’s not known if it’s a reaggravation of the MCL sprain suffered earlier in the year. We’ll see what Saturday’s NFL injury report shows, but the Packers don’t have anything to play for this week with the No. 1 seed locked up.

After suffering a shoulder injury in Week 16, the Kansas City Chiefs ruled out Clyde Edwards-Helaire a day before taking the field against the Cincinnati Bengals. It’s not believed to be a long-term injury, but Edwards-Helaire didn’t practice all week. Locked into a prime playoff spot, the Chiefs have ruled CEH out for Sunday.

Kareem Hunt hasn’t been able to get back on the field since Week 14 as he battles through an ankle injury. While he returned to limited practices this week, Hunt is OUT for Sunday.

With Chase Edmonds already ruled out for Week 18’s matchup, James Conner is in line to receive a bit more work. Unless he can’t play. Listed as questionable on the NFL injury report, keep an eye on his status before Sunday’s game.

The Dallas Cowboys have already clinched the NFC East division and won’t take any chances with Tony Pollard’s foot injury this week. Zeke’s backup is out for Week 18.

Sitting out due to injury since Thanksgiving, Raiders star pass-catcher Darren Waller could make his return for the final week of the regular season. Despite being listed as a game-time decision on the NFL injury report this week, Waller will be active tonight.

Super Bowl 2022: The Tampa Bay Buccaneers are the reigning NFL champions, but who'll make the playoffs — and lift the Lombardi Trophy at the end of this season?
NFL・8 HOURS AGO
ClutchPoints

The Kansas City Chiefs officially booked their ticket to a rematch with Josh Allen and the Buffalo Bills in the Divisional Round after blowing out the Pittsburgh Steelers on Sunday. As we all know, Patrick Mahomes and Co. beat the Bills 38-24 last season in the AFC title game and...
NFL・2 DAYS AGO
Sportsnaut

NFL picks against the spread. NFL Divisional Playoffs edition. Oh boy, this two-day slate is going to be an absolute
NFL・2 DAYS AGO
Sportsnaut

A number of NFL futures bets can be placed throughout the 2021 NFL season, but Super Bowl odds are where
NFL・9 HOURS AGO

As the games tick away on Wild Card weekend, we're getting a better idea of how the rest of the playoff picture is shaping up and NFL Divisional Round odds are on the board.
NFL・2 DAYS AGO
Sportsnaut

Cincinnati Bengals coach Zac Taylor was on the Texas A&M and Miami Dolphins staffs when Tennessee Titans quarterback Ryan Tannehill was there.
NFL・23 HOURS AGO

Super Bowl LVI will be played in the new, state-of-the-art SoFi Stadium that opened in September 2020 and serves as
NFL・9 HOURS AGO
24/7 Wall St.

After Super Wild Card Weekend, just eight teams remain in the NFL playoffs. The teams that won their divisions and earned home field advantage continued to play well, and just one Wild Card team was able to pick up a road playoff win. All eight teams are just three victories away from being crowned Super […]
NFL・1 DAY AGO
Sports Illustrated

Discover player props odds, plays, and insights for Joe Mixon in his NFL Playoffs contest with the Cincinnati Bengals against the Tennessee Titans.
NFL・4 HOURS AGO
Sports Illustrated

Fantasy Impact: Derrick Henry Could Return for Divisional Round

The star running back may return from injury for the Titans' matchup vs. the Bengals.
NFL・1 DAY AGO

Last season's 31-20 defeat to the Cincinnati Bengals was the low point for a Tennessee Titans defense that has improved greatly in 2021.
NFL・13 HOURS AGO
CBS Baltimore

BALTIMORE (WJZ) — The Baltimore Ravens re-signed cornerback Kevon Seymour for the 2022 season, returning a depth player that helped an injury-depleted secondary during the 2021 season, the team announced Monday. Financial terms of the deal were not disclosed. Between Week 15-18, Seymour played in 69% or more of the team’s defensive snaps during the final four games of the season, according to Pro Football Reference. On the season, Seymour had 25 combined tackles, including three tackles for loss and one quarterback hit. He appeared in nine games overall and started two, against the Cincinnati Bengals and Los Angeles Rams. A former 6th round pick by the Buffalo Bills in 2016, the 28-year-old Seymour has also had stints with the Carolina Panthers and Philadelphia Eagles. The Ravens will look to get healthy at cornerback next season after losing two Pro Bowlers — Marcus Peters before the 2021 season started even started and Marlon Humphrey after he suffered a torn pectoral muscle in a Week 13 loss to the Pittsburgh Steelers. Anthony Averett and Jimmy Smith are unrestricted free agents. Further down the depth chart, Chris Westry is also a restricted free agent and Khalil Dorsey is an exclusive rights free agent, the team said.
NFL・2 DAYS AGO
Sportsnaut

Discover player props odds, plays, and insights for Nick Westbrook-Ikhine in his NFL Playoffs contest with the Tennessee Titans against the Cincinnati Bengals.
NFL・4 HOURS AGO
Sportsnaut

Ex-Saints to Play a Big Role in Divisional Round

Several former New Orleans players are in a position to have a big impact in the Divisional Round of the NFL playoffs.
NFL・11 HOURS AGO
Sportsnaut

NFL TV ratings, a look forward: The NFL Playoffs have arrived, following a 2021 regular season that saw interest in
NFL・1 HOUR AGO
NFL

If the Cincinnati Bengals are going to go on a Super Bowl run, they'll have to do without one of their top defensive players. Defensive tackle Larry Ogunjobi was placed on injured reserve Monday, ending his 2021 season. The veteran lineman suffered a right foot injury in Saturday's wild-card victory against the Raiders. After signing with the Bengals last offseason, Ogunjobi recorded career highs in sacks (7.0), tackles for loss (12) and QB hits (16) while making 16 starts.
NFL・2 DAYS AGO