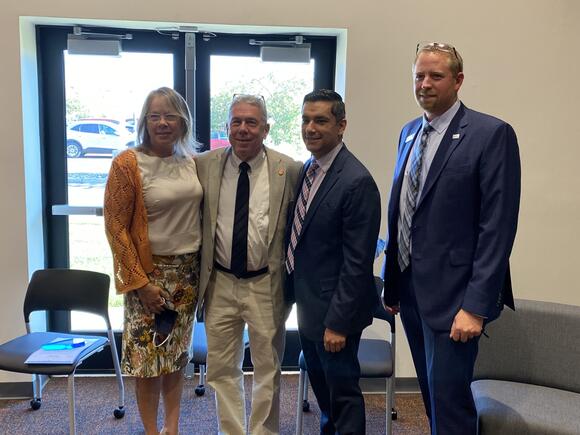 The university recognized the accomplishments and impact of Rasmussen, their former Dean of the College of Technology.

Idaho Governor Brad Little issued a proclamation declaring Aug. 12 as R. Scott Rasmussen Day, which was read during Thursday's event at the Eames Complex. The Idaho Division of Career and Technical Education arranged for Governor Little to make the proclamation in honor of the statewide impact Rasmussen had on education.

In 2011, Rasmussen was named dean of the ISU College of Technology. During his tenure as dean, he helped to raise funds to provide tools, equipment, scholarships and state-of-the-art facilities for students.

His vision has inspired donors such as the J.A. and Kathryn Albertson Family Foundation and Bill Eames to contribute millions of dollars to renovate the William M. and Karin A. Eames Advanced Technical Education and Innovation Complex.

Wyoming’s 2023 teacher of the year named

Attorneys for the state of Idaho say a federal judge misinterpreted the law when he blocked part of a strict new abortion ban, and they say another law blocking all abortions after about six weeks' gestation should also remain in effect. The post Idaho asks judge to rethink temporary block on abortion ban appeared first on Local News 8.
IDAHO STATE・6 DAYS AGO
KIFI Local News 8

Hunter who mistook dog for a wolf is under investigation

Montana authorities said Tuesday they were investigating the shooting of a 6-month-old dog by a woman who skinned the animal and posted pictures of herself with the pelt, believing she had killed a young wolf. The post Hunter who mistook dog for a wolf is under investigation appeared first on Local News 8.
1 DAY AGO
KIFI Local News 8

While detected in Idaho, surveillance of CWD continues and hunters are asked to help. The post Hunters asked to help with Chronic Wasting Disease testing in Salmon Region appeared first on Local News 8.
IDAHO STATE・5 DAYS AGO