Chauncey Billups On Value of Learning from Scott Brooks 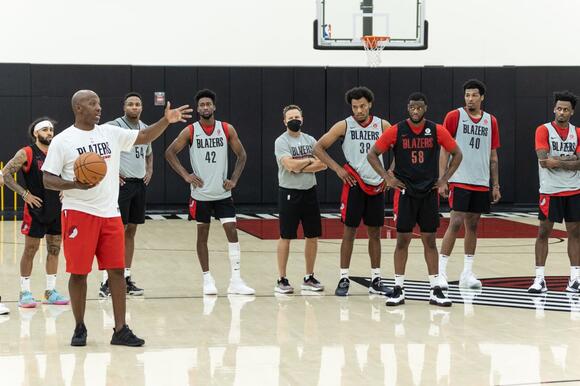 Chauncey Billups knows he has a lot to learn as a rookie head coach, and will be leaning on Scott Brooks.

Chauncey Billups saw it all during his 17-year playing career in the NBA.

He was an overmatched high lottery pick with the Boston Celtics, a second-draft flier for the Minnesota Timberwolves and NBA Finals MVP as a member of the Detroit Pistons. Billups played star sidekick to Carmelo Anthony with the Denver Nuggets, stalwart veteran for the the "Lob City" LA Clippers and locker-room mentor during his NBA swansong back in the Motor City.

Few in league history occupied as many roles within the team concept as Billups did before he finally hung it up in 2014. His keen ability to relate to players—as a teammate, broadcaster and assistant coach—has been lauded at every stop of his career in basketball, and was a driving factor behind Billups succeeding Terry Stotts on the sidelines in Portland.

But Billups, remember, spent just one season as an assistant in LA under Ty Lue before taking the reins with the Trail Blazers. He has no experience as a head coach whatsoever.

Needless to say, growing pains will be inevitable for Billups and his team in 2021-22. It normally takes years for a new coach to establish the cultural chemistry and on-court cohesion that's required to win at the highest level, and Billups will have to contend with overhauling Portland's defense and tweaking its offense, too.

The good news is that Billups is comfortable admitting he's bound to face unknowns during his rookie season as Blazers coach—and is excited to use his top assistant's decades of experience to help navigate them.

"I think my biggest challenges will be just not knowing a lot of things, which is why I thought it was really important for me, and I was so happy and lucky to get Scotty Brooks on my staff," Billups told ESPN's Mark Jones and Doris Burke on Tuesday during the Blazers' Summer League win over the Clippers . "A former head coach who's really a current head coach, in all honesty, coached in the Finals, so much playoff experience. But so many things that I just wouldn't even know that I didn't know, now I will having a guy like Scottie, and being able to bounce things off of and him being able to help me in situations."

Brooks, 55, spent the last five seasons as head coach of the Washington Wizards. Ravaged by early-season injuries and health and safety protocols in 2020-21, Washington rebounded from a disappointing start to finish the season 15-5, making the playoffs for the third time in Brooks' tenure.

He first cut his teeth as a head coach with the upstart Oklahoma City Thunder, helping mold a young Kevin Durant and Russell Westbrook into superstars.

The humility that comes with the willingness to learn is one of the most underrated attributes a head coach can possess. Billups has it, clearly, and the Blazers will benefit as a result—just like he will from the support of a veteran head coach like Brooks.