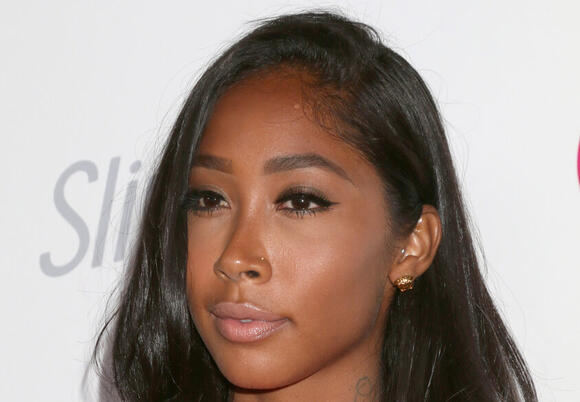 Jones says that despite the fact that the couple has not been in item for six years, he’s continuing to make her life a living hell.

“We found a method but there’s no relationship. He has people that deal with the kids, so I’d rather preferably deal with them. And I’m always getting served… that’s just the truth,” she says in the video.

“So it’s like constantly having to deal with that in court, and I’m tired and I would preferably like it to stop. And I know you guys are gonna laugh at this like, ‘You got served!’ It’s like, I laugh too. How does that ironically… how is that.”

She continued, “We have not been together for six years so I don’t understand what the problem is. I’m not the baby momma who’s like a crazy baby momma or gonna like knock on the door, ‘Gimme the…’ I’m not. It’s like, take the kids, have a good time, enjoy your life, you know what I’m saying? So, I don’t know.”

In an interview with MadameNoire, she said that Omarion played a part in her breakup with Fizz.

“I think it was a lot of pressure on our relationship…I think that [Omarion] also played a part in it, too, which made him feel like he was putting me in a situation and you know, all of that pressure,” she said. “It was just better to end it and be amicable and walk away from it because it wasn’t going to work.”

Yes, it’s true: ex and current spouses to the same partner can get along as seen in the trailer to an upcoming episode of Red Table Talk, a Facebook Watch series co-hosted by actress and wife to megastar Will Smith, Jada Pinkett Smith. In the trailer, Sheree Zampino, Smith’s...
CELEBRITIES・27 DAYS AGO
Shine My Crown

About every 30 days or so, supermodel Tyra Banks begins to trend on Twitter – and it’s rarely for anything good. During last Monday’s taping of Dancing With Stars, themed after Elvis Presley, Banks made what some are calling a “creepy” comment about TikTok star Charli D’Amelio, who successfully emerged as a frontrunner for the show’s 31st season. After performing Presley’s Bossa Nova Baby with dance partner Mark Ballas, Banks commented on D’Amelio’s neck.
THEATER & DANCE・1 DAY AGO
Shine My Crown

Beyoncé paid homage to her singer and songwriter sister Solange Knowles online over the weekend for becoming the first Black woman to compose an original score at the New York City Ballet (Gianna Reisen’s Play Time) for the 10th Fall Fashion Gala at Lincoln Center. And some fans are speculating that one cryptic line in her post could be a dig at her husband and rapper extraordinaire JAY-Z.
NEW YORK CITY, NY・1 DAY AGO
Shine My Crown

The Real Housewives of Atlanta star Porsha Williams has remained relatively silent about wedding plans since revealing she became engaged to investor Simon Guobadia in May 2021. But in a recent Instagram post, she may have confirmed that she and her “hubby” are already married. “When the husband...
CELEBRITIES・29 DAYS AGO

Future of Issa Rae’s ‘Rap Sh!t’ Season 2 Up in the Air

Social media influencer Kiara Moore and her BFF finally took that long-needed girls trip and ended up having dinner with rap icon, Nas. While vacationing in Turks and Caicos, Moore posted a video on TikTok of her friend being served cake during her birthday dinner. While singing happy birthday, Nas, who was seated at a table near them, raised a glass and made a toast. Moments later, he approached their table and had drinks with the ladies.
CELEBRITIES・28 DAYS AGO
Vibe

DJ Cassidy put the cherry on top of the celebratory evening with the BET Hip Hop Awards edition of his series, Pass The Mic. The virtual cypher brought out heavy hitters from the West Coast and the birthplace of Hip-Hop, New York City. For the 10th and last televised episode, each rapper performed portions of their classic records with ad-libs from the 41-year-old deejay himself. A few of the tracks were also heard during the Loud 30 Tribute performance during the award show. For the series’ grand finale of his 30-minute programming, Method Man kicked things off, rapping passionately to “Da...
NEW YORK CITY, NY・38 MINUTES AGO