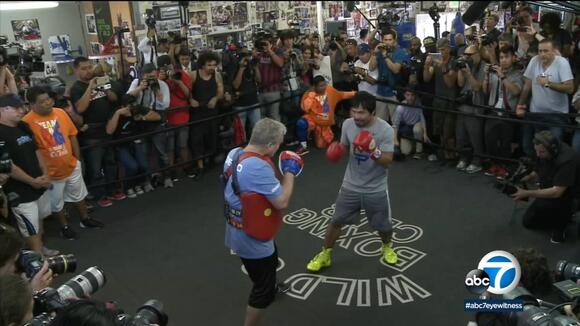 Manny Pacquiao is training for his fight against Errol Spence Jr. on Aug. 21, in a bout pitting an eight-division world champion against one of the sport's most dominant current champions. Pacquiao (62-7-2, 39 KOs) and Spence (27-0, 21 KOs) will fight for Spence's WBC and IBF welterweight titles when they meet at T-Mobile Arena in Las Vegas. The 42-year-old Pacquiao is a senator in his native Philippines. He hasn't fought since July 2019, when he beat Keith Thurman by split decision for his third consecutive victory. Pacquiao said it was a "good thing that I have two years layoff, rest. But really, I don't feel 42, I feel 29, 30, like that." Watch Pacquiao's interview with ABC7's Rob Fukuzaki in the video above. ESPN contributed to this report.

At long last, after years of eager anticipation, Manny Pacquiao and Floyd Mayweather Jr. will face off once again. It’s the reunion that was bound to happen, especially after the continued clamor from fans. Mayweather handily defeated Pacquiao via unanimous decision in 2015, dubbed as the “Fight of the Century.”...
COMBAT SPORTS・2 DAYS AGO
Boxing Scene

Terence Crawford: Yeah, I Was Chasing Spence, But He Really Didn't Want The Fight

LAS VEGAS – With Terence Crawford’s most telling test as a welterweight a mere six weeks away, he inevitably was asked Friday about the 147-pound showdown he once wanted more than any fight. Crawford reiterated, though, that he has moved on from the prospect of facing Errol Spence Jr. in...
COMBAT SPORTS・14 DAYS AGO
lmu.edu

JARED SIVILA WRITES — For many Filipino households, Manny Pacquiao’s fights in the boxing ring were an excuse for celebrations and parties as big as Christmas or Thanksgiving. During his prime, Manny Pacquiao consistently drew an overwhelming audience to watch his finesse and expertise within the ring. The legendary fighter boasts 12 world boxing titles over eight weight divisions, with a staggering record of 62 wins and 7 losses.
COMBAT SPORTS・13 DAYS AGO
MMAmania.com

If having Manny Pacquiao as a father isn’t a good enough resource, Emmanuel Pacquiao Jr. can also draw from the genius of professional boxing superstar, Canelo Alvarez. Pacquiao Jr. recently got some reps in with Alvarez. Video of the younger Pacquiao, 20, was posted to social media. In one clip, which you can watch below, Pacquiao Jr. works with Alvarez’s coach before the reigning unified Super Middleweight world champion gets involved.
COMBAT SPORTS・12 DAYS AGO

Keith Thurman On Errol Spence: “I Bet He Hates Having To Talk About Me.”

Credit Marcos Villegas for getting Keith Thurman to talk for the better portion of an hour for Fight Hub TV. The former WBA titlist hasn’t been in the ring since he was bested by Manny Pacquiao in 2019, though he’s always been open to speaking his mind. “Just really homebound,” new father Thurman told Villegas, “getting back in the gym.” Thurman also indicated he’s eager to return to the ring soon. “There’s a little bit more to fight for,” he said of being a father. “Just can’t wait to get back and showcase my skills again…I always live for the performance.”
COMBAT SPORTS・10 DAYS AGO
ESPN

EMOTIONALLY HIGH OFF a huge payday, Shakur Stevenson felt like it was time to get iced out. He had just claimed the WBO interim junior lightweight title after cruising past Jeremiah Nakathila. His 24th birthday was right around the corner. So, Stevenson decided to spoil himself with a gift: a chunky, diamond-encrusted chain with his initials, SS, as a flashy charm.
COMBAT SPORTS・4 DAYS AGO
CBS Sports

After starting his professional career with seven consecutive wins, five by knockout, Evan Holyfield was back in action on Saturday night, battling Charles Stanford on the undercard of the event headlined by Shakur Stevenson vs. Jamel Herring. It took Holyfield, son of legendary boxer Evander Holyfield, slightly more than one...
COMBAT SPORTS・3 DAYS AGO
MMAmania.com

It’s been nearly a year since Mike Tyson stepped into the boxing ring against Roy Jones Jr. in a fight that made a whole lot of money for everyone involved. That didn’t stop Tyson and his then-promotional partner Triller from splitting and getting into a legal fracas that may be delaying “Iron Mike” from scheduling another ‘super exhibition’ bout.
COMBAT SPORTS・23 DAYS AGO

John McCarthy has ripped Daniel Cormier over his comments about Fedor Emelianenko. The former UFC light heavyweight and heavyweight champion, Cormier, recently said on his YouTube channel that he thought had Emelianenko signed with the UFC, he would’ve been average at best. Those comments took many by surprise, including John McCarthy, who proceeded to rip ‘DC’ for for his controversial take.
UFC・1 DAY AGO
HipHopDX.com

By Scott Gilfoid: Dillian ‘The Body Snatcher’ Whyte says WBC heavyweight champion Tyson Fury is “slowing down” due to the Kronk Gym style of brawling that he’s now using for his fights, and he will be fighting him next after the WBC mandated the match-up. Whyte (28-2, 19 KOs) denies...
COMBAT SPORTS・2 DAYS AGO
Boxing Insider

Derrick James: “I Think Terence Crawford Is Fighting A Guy That Errol Spence Took A Lot Out Of”

There’s little to no denying that Terence Crawford will face a significant step up in competition come November 20th. On the night in question, Crawford will place both his WBO welterweight title and undefeated record on the line against former two-time champion Shawn Porter, at the Mandalay Bay Resort & Casino in Las Vegas, Nevada.
LAS VEGAS, NV・8 DAYS AGO

By Allan Fox: Errol Spence Jr says he wants a title fight when he returns to the ring in early 2022. He says that tune-up fights are for fighters that lack confidence in themselves, and he’s not in that position. Still, Spence’s recent torn retina that he suffered last August...
COMBAT SPORTS・2 DAYS AGO
Boxing Insider

At times, boxing comes down to one-upping your fellow rivals. Oftentimes, fighters who are at the top of their respective weight class, face off against similar opponents. In cases such as those, the performances of both stars will be juxtaposed. On November 20th, at the Mandalay Bay Resort & Casino...
COMBAT SPORTS・13 DAYS AGO
worldboxingnews.net

Manny Pacquiao Jr. looks a chip off the old block training alongside Canelo

Manny Pacquiao Jr., or “Jimuel” as he is better known, is learning from the best around as he continues to dip his toes into his father’s family business. The youngster, who has had a few amateur fights, got invited by Team Eddie Reynoso to share the gym with the pound-for-pound king Canelo Alvarez.
COMBAT SPORTS・10 DAYS AGO
thaboxingvoice.com

Told that Yordenis Ugas’ ‘special permit’ request to bypass WBA mandatory title defense has been denied and that he now has 30 days to agree to terms for fight w/ Eimantas Stanionis. Full story to come on. @boxingscene. Join this channel to get access to perks:. https://www.youtube.com/channel/UCcKT39KR_e3ZliHe4cyC06A/join. One Free Month...
COMBAT SPORTS・6 DAYS AGO

Wallin: I Feel I Can Beat Whyte, Earn My Shot To Fight Fury Again

Otto Wallin has spoken of the disappointment he felt when Dillian Whyte pulled out of their scheduled October 30 fight last week. Whyte cited a damaged shoulder, leaving Wallin hoping that their contest will be rescheduled while boxing chatter intensifies that Whyte will now go in to a straight shot at WBC champion Tyson Fury instead, so Wallin will have to think of a new path to heavyweight gold.
COMBAT SPORTS・3 DAYS AGO
chatsports.com

Eddie Hearn has overlooked Anthony Joshua's chances in his heavyweight rematch with Oleksandr Usyk, as the promoter accidentally let slip that he believes the Ukrainian will beat his star fighter next year. The British heavyweight activated his rematch clause over the weekend after losing his WBA, WBO, IBF and IBO...
COMBAT SPORTS・12 DAYS AGO
The Independent

Floyd Mayweather has declared his support for NBA star Kyrie Irving as the basketball player continues to refuse the Covid vaccine.Irving, who plays for the Brooklyn Nets, currently cannot play in the state of New York due to the state’s vaccine mandate.The 29-year-old’s decision to reject the coronavirus vaccine has divided opinion in the US, but legendary boxer Mayweather insists he understands Irving’s position.Speaking on Twitter, he said: “Kyrie, whats up, I know you’re going through a lot. We had the chance to hang out in 2016 when you represented America, when you represented the red, white and blue.“You only...
NBA・1 DAY AGO
Sportsnaut

Logan Paul’s next fight: Everything you need to know