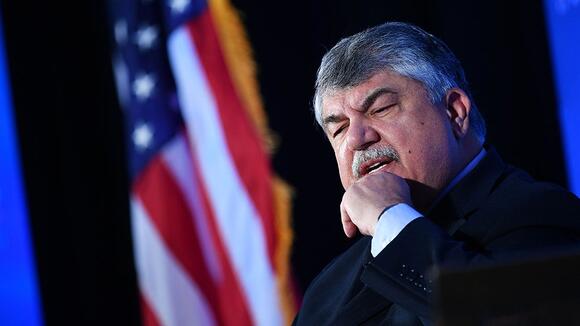 AFL-CIO President Richard Trumka has died at the age of 72, the labor organization said Thursday.

"The labor movement, the AFL-CIO and the nation lost a legend today,” AFL-CIO Communications Director Tim Schlittner said in a statement.

“Standing on Rich’s shoulders, we will pour everything we have into building an economy, society and democracy that lifts up every working family and community.”

A third-generation coal miner from Nemacolin, Pa., Trumka rose to prominence in 1982 when he became the youngest-ever president of the United Mine Workers of America. He was elected president of the AFL-CIO in 2009.

Tributes to Trumka immediately came from political figures, including President Biden , who called him a “good, close, personal friend” during a Thursday event.

Trumka served as president of the influential labor group, which represents more than 12 million workers, for more than a decade.

"The working people of America have lost a fierce warrior, at a time when we needed him most," Senate Majority Leader Charles Schumer (D-N.Y.) said in remarks on the Senate floor.

“Richard Trumka dedicated his life to the labor movement and the right to organize,” Speaker Nancy Pelosi (D-Calif.). said in a statement Thursday. “Richard’s leadership transcended a single movement, as he fought with principle and persistence to defend the dignity of every person.”

Lee Saunders, president of the American Federation of State, County and Municipal Employees, an AFL-CIO affiliate, praised Trumka as “one of the fiercest advocates for working people ever” in a statement.

Sen. Joe Manchin (D-W.Va.) said he was "heartbroken to learn of the death of my dear friend Richard Trumka."

"Rich’s story is the American story — he was the son and grandson of Italian and Polish immigrants and began his career mining coal. He never forgot where he came from. He dedicated the rest of his career to fighting for America’s working men and women," Manchin said in a statement.

"He was a fierce advocate for working people and a truly decent man. Most importantly, he was a devoted husband, father and grandfather."

Labor unions on Thursday pledged to keep fighting for Trumka’s legislative priorities, including the PRO Act, a sweeping pro-union bill that passed the House in March but faces Republican opposition in the Senate.

“It is in that spirit that we vow to carry on his legacy, organizing and mobilizing workers,” Sara Nelson, president of the Association of Flight Attendants-CWA, AFL-CIO, said in a statement.

“There is important unfinished work to do. Rich vowed to lead the movement until the PRO Act is signed into law. We must recommit ourselves as a movement to doing what is needed to achieve his mission for working people: a fair chance to survive and thrive.”

President Biden failed to persuade Sen. Joe Manchin (D-W.Va.) to agree to spending $3.5 trillion on the Democrats' budget reconciliation package during their Oval Office meeting on Wednesday, people familiar with the matter tell Axios. Why it matters: Defying a president from his own party — face-to-face — is the...
CONGRESS & COURTS・2 DAYS AGO
citywatchla.com

Trumka’s father and grandfather worked in the mines. He, the brightest of his generation, wasn’t really supposed to go into the mines. He saw his father operate a machine in the mines. Enamored by his father’s deft and graceful manipulation of the machine, Trumka wanted to be like him. Trumka recounted to journalists the summer before he went away to college. He’d taken a job in the mine and his father told him, “The first drop of sweat, the first drop of blood, and you’ll never be able to get it out of your system.” Trumka later found his father’s words to be true.
ECONOMY・12 DAYS AGO
blogforarizona.net

‘Disappointing’ Sinema Is About To Face A Moment Of Truth On Senate Filibuster Rule. Axios reports, Scoop: Sinema’s secret spreadsheets:. Sen. Kyrsten Sinema (D-Ariz.) is negotiating the size and scope of President Biden’s $3.5 trillion budget plan armed with her own spreadsheets about the costs and tax hikes needed for each program, people familiar with the matter tell Axios. [Maybe she should actually ask her constituents what they want, instead of listening to the U.S. Chamber of Commerce which opposes the bill because of taxes on the wealthy and corporations to pay for the bill.]
CONGRESS & COURTS・3 DAYS AGO
POLITICO

Sen. Joe Manchin has only grown bolder in his opposition to spending $3.5 trillion to transform social programs, prompting irritation in his caucus.
CONGRESS & COURTS・1 DAY AGO

Lobbyists for business interests are confident they can fight off parts of House tax proposal they find most threatening.
AGRICULTURE・2 DAYS AGO
The Independent

One side is energized by the prospect of the greatest expansion of government support since the New Deal nearly a century ago. The other is fearful about dramatically expanding Washington's reach at an enormous cost.They're all Democrats Yet each side is taking vastly different approaches to guiding the massive $3.5 trillion spending bill through Congress.The party is again confronting the competing political priorities between its progressive and moderate wings. The House version of the bill that was drafted this week ushered in a new phase of the debate that could test whether Democrats can match their bold...
CONGRESS & COURTS・1 DAY AGO
truthorfiction.com

As presented in share format, Facebook users were exposed only to the claims in the headline, which suggested that United States President Joe Biden and U.S. Vice-President Kamala Harris were “served” with an “impeachment charge,” language clearly used to imply that Biden and Harris were formally or criminally “charged.”. Incidentally,...
U.S. POLITICS・16 DAYS AGO
Shore News Network

The House Committee on Energy and Commerce rejected a key drug pricing control bill in a stunning rebuke of House Speaker Nancy Pelosi and Democratic leadership. Democratic Reps. Kurt Schrader, Scott Peters and Kathleen Rice voted alongside their Republican colleagues on the panel, creating a 29-29 tie on the vote to pass the legislation during a committee hearing Wednesday. The hearing was held to mark up parts of Democrats’ sweeping $3.5 trillion budget reconciliation package, the Build Back Better Act.
CONGRESS & COURTS・2 DAYS AGO

Ever since Mike Pence announced on Jan. 6 that he lacked power to help Donald Trump overturn the 2020 election in Congress, it’s been widely suggested that the vice president was one of the few heroes in this ugly tale. But new revelations in the forthcoming book by Post reporters...
POTUS・4 DAYS AGO
Business Insider

McConnell is determined to resist Democratic pressure to raise the debt ceiling alongside them. The showdown could derail the economic recovery.
CONGRESS & COURTS・3 DAYS AGO
News 5 Cleveland WEWS

'I will never support him again. He’s forfeited that.'

Anthony Gonzalez interview about why he is not seeking reelection.
ROCKY RIVER, OH・1 DAY AGO
Washington Times

House Democrats’ plan to pay for their $3.5 trillion expansion of the federal safety net violates President Biden‘s pledge not to raise taxes on individuals making less than $400,000 annually. An analysis by the Joint Committee on Taxation, a special congressional panel made up of 10 senior lawmakers from both...
CONGRESS & COURTS・4 DAYS AGO

Pennsylvania Gov. Tom Wolf said he would recall his Senate nomination for secretary of the commonwealth due to the "bad faith" actions by Republicans attempting to audit the 2020 presidential election results.
PENNSYLVANIA STATE・4 DAYS AGO
Business Insider

"I think what we're looking at is here's $1000 right away, use that to go to a dentist if you cannot afford to go," Sen. Bernie Sanders told Insider.
PRESIDENTIAL ELECTION・4 DAYS AGO
Business Insider

Nancy Pelosi rips into capitalism, saying it 'has not served our economy as well as it should'

Pelosi tore into American capitalism on Friday, saying it has let many people down. She said "our economic system" has helped some people thrive from the "exploitation" of workers and the environment. The same week, Biden tore into surging billionaire wealth as Democrats try to curb inequality in the US.
CONGRESS & COURTS・1 DAY AGO
Matt Lillywhite

Kamala Harris Would Become President If The 25th Amendment Gets Invoked

In a recent tweet, Sen. Rick Scott (The GOP Campaign Chairman) made a statement that caused a lot of debate around the country. "After the disastrous events in Afghanistan, we must confront a serious question: Is Joe Biden capable of discharging the duties of his office, or has the time come to exercise the provisions of the 25th Amendment?"
1 DAY AGO
Business Insider

"Don't you think, if we're going to help the children, that the people should make some effort?" Manchin said.
CONGRESS & COURTS・6 DAYS AGO
Jano le Roux

Even as her party’s big spending plan faces opposition from key Democrats, Vice President Kamala Harris urged legislators on Wednesday to support legislation that she claimed would increase access to child care and boost the salaries of day-care workers.
2 DAYS AGO
POLITICO

The two senators met Tuesday afternoon, after McConnell promised that no Republicans would support the legislation.
CONGRESS & COURTS・1 DAY AGO
Shore News Network

A majority of Americans agree with Democratic Sen. Joe Manchin of West Virginia’s opinion there should be a “strategic pause” on Democrats’ $3.5 trillion reconciliation bill, according to a No Labels poll on Thursday. The survey of 972 registered voters shows 6 out of 10 support Manchin‘s position for a...
CONGRESS & COURTS・9 DAYS AGO