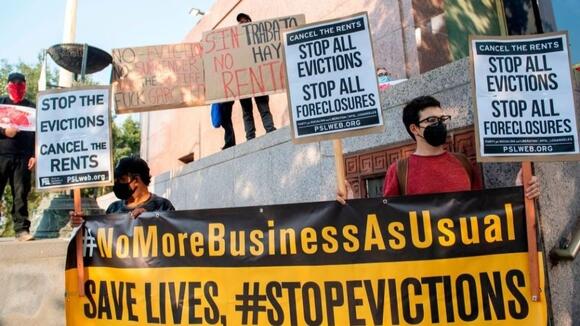 Groups representing landlords are asking a judge to lift the new eviction moratorium enacted by the Centers for Disease Control and Prevention (CDC).

The Alabama Association of Realtors, along with other groups, said in an emergency filing Wednesday that the CDC’s order is “unlawful” and was issued "for nakedly political reasons — to ease the political pressure, shift the blame to the courts for ending the moratorium, and use litigation delays to achieve a policy objective.”

The groups also pointed to comments from President Biden , who said "the courts ... made it clear that the existing moratorium was not constitutional; it wouldn't stand."

Biden earlier this week noted that while most experts say the moratorium is not likely to pass constitutional muster, "by the time it gets litigated, it will probably give some additional time” to renters.

"Whether that option will pass constitutional measure with this administration, I can’t tell you. I don’t know," Biden said. "There are a few scholars who say it will, and others who say it’s not likely to. But, at a minimum, by the time it gets litigated it will probably give some additional time while we’re getting that $45 billion out to people who are in fact behind in the rent and don’t have the money."

The Supreme Court ruled in June to allow the CDC to extend its original eviction moratorium until the end of July but said congressional approval would be needed for another extension.

The CDC did narrow the new eviction moratorium to only areas with high rates of COVID-19 transmission, but it still applies to 90 percent of the U.S. population.

John Kruzel contributed to this report, which was updated at 9:36 a.m.

So how long are middle class landlords going to keep getting destroyed by these unconstitutional eviction moratoriums? Enough is enough already. People have been getting "Free" money for months now, if they can't pay their bills evict them. Landlords have legally binding contracts with their tenants and are being damaged due to misguided Biden politics.

SCOTUS voted 5-4 to uphold the ban. Justice Kavanaugh wrote that he agreed with district Judge Friedrich's ruling that struck down the ban, but voted to uphold the ban because, at the time ban was only until July 31 and “because those few weeks will allow for additional and more orderly distribution of the congressionally appropriated rental assistance funds.” Without Kavanaugh's vote, the rent ban would have been overturned. Because the rent ban has been extended, the case should be re-opened by SCOTUS.

More than a year and half into the COVID pandemic, health experts and officials continue to urge that the best way to end surges of new cases is by getting more people vaccinated, especially as highly transmissible variants, like Delta, continue to spread. In the U.S., President Joe Biden recently announced a new plan that includes vaccination requirements for many workers, including healthcare and federal employees. But that's just one way the U.S. government is taking measures to get people vaccinated; the latest move comes from the Department of Homeland Security (DHS).
IMMIGRATION・4 DAYS AGO
Axios

A federal judge on Thursday blocked the Biden administration from enforcing a public health order that fast-tracked deportations of migrant families at the southern border. Why it matters: President Biden has faced significant backlash for retaining the Trump-era policy, which was implemented as a COVID containment measure. The expulsions deny adult migrants and families the chance for asylum.
CONGRESS & COURTS・2 DAYS AGO
roselawgroupreporter.com

Which landlords filed for most evictions?

A relatively small number of landlords have accounted for a large share of eviction filings in Maricopa County, according to a national study. Based on analysis from the Eviction Lab at Princeton University, the 100 property owners and managers with the most eviction filings are responsible for more than one-quarter of the total since the end of June. They are also accountable for more than 20% of all eviction filings since the beginning of the pandemic in March 2020.
MARICOPA COUNTY, AZ・4 DAYS AGO
csun.edu

California’s eviction moratorium still stands. But is that enough?

While California’s reopening has boosted the economy’s recovery from the throes of the COVID-19 pandemic, numbers suggest that many are vulnerable to slipping through the cracks, and with the Supreme Court’s rejection of a federal evictions moratorium this past week, it looks like these cracks may only be widening. While...
CALIFORNIA STATE・9 DAYS AGO

Landlords say the eviction moratorium, which was recently extended in New York through January 15, 2022 due to the coronavirus pandemic in a special session held by lawmakers in Albany last week will have long lasting effects. “I don’t make enough to subsidize city rental properties,” Rochester-area landlord Rich Tyson...
ROCHESTER, NY・12 DAYS AGO
norwoodnews.org

A housing rally organized by Congressman Ritchie Torres (NY-15) in Hunts Point on Aug. 3 achieved the desired result: an extension of the State eviction moratorium. In addition, the State moratorium offers greater protections than its federal counterpart, which is also fortunate as in the meantime, the federal moratorium extension has been struck down by the U.S. Supreme Court.
7 DAYS AGO
Badger Herald

The Supreme Court has blocked the Biden administration’s attempt to extend the eviction moratorium, allowing evictions to resume nationwide. The Supreme Court voted six-to-three to end the moratorium Aug. 26, with the lone three liberal justices dissenting, according to their official decision. The Centers for Disease Control and Prevention, with support from the Biden administration, had extended the nationwide eviction moratorium until Oct. 3 due to surging COVID-19 cases.
MADISON, WI・4 DAYS AGO
cbs12.com

FORT PIERCE, Fla. (CBS12) — Many renters are still having trouble paying your rent, utilities, or other housing costs, and landlords are trying to stay afloat. "Ever since I’ve opened up my practice, it was has been exploding with eviction issues," said Jonathon Daily, an attorney in Port St. Lucie. "People out there are going through the same issues. Some people out there really do care and want to help, but that being said the law is the law."
PALM BEACH COUNTY, FL・4 DAYS AGO

This story was originally published by Milwaukee Neighborhood News Service, where you can find other stories reporting on fifteen city neighborhoods in Milwaukee. Visit milwaukeenns.org. You may have heard that the U.S. Supreme Court on late Thursday overturned the federal ban on eviction, making it easier for landlords to kick...
MILWAUKEE, WI・14 DAYS AGO
KULR8

BUTTE, Mont. - The Supreme Court’s recent decision to end the nationwide eviction moratorium means many people across the country will need to pay the rent or find a new place to stay, and Montana is no different. That moratorium, extended as recently as early August by President Joe Biden,...
BUTTE, MT・11 DAYS AGO
thepioneeronline.com

As moratoriums come to an end, eleven million are homeless across the U.S. More than 11 million people were put in jeopardy of losing their homes and being forced to live on the street as the Supreme Court struck down the federal eviction moratorium that kept people in their homes during the global pandemic.
OAKLAND, CA・11 DAYS AGO
Kokomo Perspective

Tenants in Howard County covered by eviction moratoriums found themselves faced with uncertainty on Aug. 26, after the Centers for Disease Control and Prevention’s ban on evictions was struck down by the Supreme Court. Jan Taylor, director of the Kokomo Rescue Mission, said this situation is completely unprecedented. “We’ve never...
HOWARD COUNTY, IN・11 DAYS AGO

The Black August protest took place on Aug. 28 outside the Sheriff’s office hosted by the Party for Socialism and Liberation to protest the removal of the eviction moratorium. The rally took place in order to demand the end of police militarization, fix jail conditions as well as how the...
CHAMPAIGN, IL・13 DAYS AGO
Boston University

“I hope students learn how fulfilling it can be to help give voice to the voiceless.”—LAW Dean Angela Onwuachi-Willig. When it became clear in late August that President Biden’s efforts to extend a nationwide moratorium on residential evictions would fail and hundreds of thousands of tenants would stand at risk of eviction, US Attorney General Merrick Garland asked the legal community for help. Angela Onwuachi-Willig, dean of the BU School of Law, was among those who answered his call for action.
BOSTON, MA・10 DAYS AGO
therealdeal.com

You can put lipstick on an unconstitutional eviction ban, but landlords will still take it to court. In the vicious cycle of New York’s eviction protections, a new state ban, signed into law a week ago, is back in federal court over claims that it still denies landlords due process.
NEW YORK CITY, NY・9 DAYS AGO
nwahomepage.com

ARKANSAS (KNWA/KFTA) — An unprecedented amount of Americans are now at risk of losing their homes with the Supreme Court’s decision to end the eviction moratorium. Kendall Lewellen, managing attorney at the Center for Arkansas Legal Services, said she expects to see a wave of evictions in the near future.
ARKANSAS STATE・13 DAYS AGO
postnewsgroup.com

NEW YORK (CBSNewYork) — Apartment building owners in New York are taking action to block the newly passed eviction moratorium. The Rent Stabilization Association, which represents the landlords of one million apartments, filed a motion in a state appeals court to prevent enforcement to the new law. Last week, Gov. Kathy Hochul signed legislation that extended the eviction moratorium until Jan. 15, 2022. U.S. Supreme Court justices had previously ruled in favor of landlords and blocked part of New York’s eviction moratorium that would have expired at the end of August. The ruling said the state cannot enforce a provision that lets renters avoid eviction by filing a hardship declaration form. Instead, the court should determine the hardship.
NEW YORK CITY, NY・9 DAYS AGO
jackcentral.org

Local families hit by the end of CDC eviction moratorium

After a series of extensions, the CDC’s eviction moratorium set in place to protect low-income tenants during the COVID-19 pandemic was overturned by the United States Supreme Court in a 6-3 ruling. According to data from the Center on Budget and Policy Priorities, an estimated 253,000 Arizonans are behind on rent.
COCONINO COUNTY, AZ・10 DAYS AGO
Eater

New York’s eviction moratorium has been extended for a few more months. Last week, the New York legislature voted to extend the state’s moratorium on evictions for residential tenants and small businesses, the New York Times reports. The pandemic eviction freeze, which Governor Kathy Hochul signed into law over the weekend, now runs through the next four-and-a-half months, until January 15.
NEW YORK CITY, NY・11 DAYS AGO