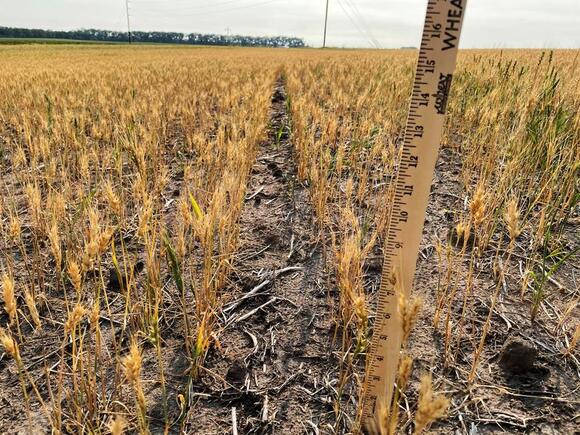 WINNIPEG, Manitoba/FARGO, N.D. (Reuters) - Millers and bakers are draining wheat reserves and paying more for spring wheat used in baking, as drought shrivels crops across the Canadian Prairies and northern U.S. Plains that produce more than half of the world’s supply.

U.S. and Canadian farmers are bracing for a sharply smaller spring wheat harvest due to the driest conditions in decades, as severe weather damages crops across the hemisphere, from heat scorching cherries in the U.S. Pacific Northwest to frost chilling sugarcane in Brazil.

While overall global wheat stocks are large, the drought affects mainly the high-protein spring wheat crop that millers such as Archer Daniels Midland Co and bakers including Grupo Bimbo rely on to produce the texture and moistness in baked goods that consumers expect.

Importers from Britain to China must pay up for limited North American harvests or turn to other suppliers like Australia and Russia.

Camas Country will rely on stockpiled wheat from last year to top up this year’s supplies to produce flour. But Hunton worries about the drought carrying into next year.

“This isn’t sustainable for anyone,” he said.

In Canada, bread prices may rise as much as 6.5% by late this year, said Sylvain Charlebois, director of the Agri-Food Analytics Lab at Dalhousie University in Halifax, Nova Scotia.

U.S. prices are more difficult to forecast, since flour prices dropped earlier this year as lockdowns eased and fewer people baked at home, he said.

Canada’s spring wheat crop is expected at between 16 and 20 million tonnes, well off last year’s 25.8 million, said Bruce Burnett, director of markets and weather information at MarketsFarm. Just 16% of spring wheat in Saskatchewan and 21.6% in Alberta is in good or excellent condition, according to provincial governments.

The U.S. spring wheat harvest is expected to drop 41% from a year ago to the lowest production in 33 years, according to the U.S. Department of Agriculture (USDA).

The USDA on Monday estimated that just 10% of the country’s spring wheat crop was in good or excellent condition, down from 73% a year ago and the lowest rating for this point of the season since the 1988 drought.

In Montana, where the USDA has deemed 42% of spring wheat in very poor condition and another 43% in poor shape, growers are buying out of sales contracts inked earlier in the season with elevators because they will not have wheat to deliver.

“I cancelled more contracts last week than I wrote. If they don’t have a crop, they have no choice,” said one commercial grain buyer who declined to be named as he is not authorized to speak to media.

China, which normally buys modest amounts of North American spring wheat to make high-quality bread and baked goods, will likely buy more from other suppliers such as Australia, said a China-based trader with an international trading house.

Russia may make up some of North America’s shortfall in the global market. Southern Russia, the country’s main wheat-producing region, is producing wheat with higher protein than a year ago, Dmitry Rylko, head of the Moscow-based IKAR consultancy, said.

Spring wheat from Russia and Kazakhstan, however, does not have the same characteristics important for baking, such as gluten strength, as U.S. hard red spring wheat and Canadian Western Red Spring, said Mike Spier of U.S. Wheat Associates, a trade group that promotes U.S. wheat overseas.

The drought will force bakers to change how they work with flour, adding more water to compensate for dryness and making other adjustments to avoid producing crustier-than-usual buns, said Glenn Wilde, owner of Harvest Bakery in Winnipeg, Manitoba.

United Kingdom baker Warburtons buys half of its wheat from Canada, about 200,000 tonnes annually, grown by farmers to the company’s specifications. The company will pay more this year to ensure it acquires enough Canadian spring wheat, said Adam Dyck, Warburtons’ Canadian program manager, adding that many kernels may be too shrivelled to mill into flour.

Dyck said he is accustomed to seeing pockets of drought on the Prairies, but nothing this widespread.

“It’s pretty unique for this generation,” he said.

Exceptional drought continued to ease in central North Dakota over the past week, but overall dry conditions in the state remained otherwise unchanged. Exceptional drought is the worst of four categories. It now covers less than 2% of the state -- a small pocket in Golden Valley County in the southwest and an area encompassing parts of the central counties of McLean, Sheridan and McHenry, according to the latest U.S. Drought Monitor map, released Thursday.
BISMARCK, ND・2 DAYS AGO
Time Out Global

Australian strawberry farmers are being forced to ditch fields of fruit

You can add the farmers who supply masses of strawberries to cafes and restaurants across the country to the sad pile of casualties struggling under this year's lockdowns. Demand has dropped by up to 50 per cent in some areas and big supermarkets are charging only a dollar per punnet in an attempt to move the backlog.
GROCERY & SUPERMAKET・5 DAYS AGO
mtpr.org

As farmers are wrapping up wheat harvest, they are seeing lower yields as a result of drought conditions. But, higher wheat prices may help some producers offset the losses. A lack of moisture and hot temperatures stunted wheat crops in Montana this year, says Cassidy Marn, the Montana Wheat and Barley Committee’s executive vice president. She says some farmers in Eastern Montana reported acreage that was unharvestable.
AGRICULTURE・4 DAYS AGO
bakingbusiness.com

VEVEY, SWITZERLAND — All components within Nestle SA’s North American operations — Nestle USA, Purina North America, Nestle Canada, Nestle Health Science and Nespresso — are performing well, leaving executives confident about the future of the business in the region. Growth in the region can be traced back to a...
ECONOMY・5 DAYS AGO

North America continues to experience a strong mergers and acquisitions (M&A) pipeline with record quarter-over-quarter growth as the momentum that started in the second half of 2020 doesn’t appear to be slowing down. Low interest rates, strategics (especially those that thrived in the pandemic) and private equity (PE) firms stocked...
MARKETS・5 DAYS AGO
naturalgasworld.com

Canadian rancher Dianne Riding strode across her brown pasture near Lake Francis, Manitoba, as record-breaking heat and drought left her with too little grass or hay to feed her cattle. Ranchers and cattle experts stress that North American cattle production is expected to be negatively affected by such liquidations, reducing...
AGRICULTURE・11 DAYS AGO
ambcrypto.com

The last few years have seen many new blockchain-based startups emerge around the world. Some established ones like Coinbase have held fairly successful public offerings too. Consider this – The number of new entries to the industry this year has almost equaled the figures for the last two years combined.
MARKETS・14 DAYS AGO
breakingtravelnews.com

Holland America Line to be fully operational by spring

Holland America Line has confirmed plans to return its entire fleet to operation by late next spring. Noordam will restart with a March 14th cruise in Japan; Oosterdam will begin cruising May 1st in the Mediterranean, and Westerdam will return to service May 8th in Alaska. The ships will join...
BOATS & WATERCRAFTS・9 DAYS AGO

SARATOGA, Wyo. (AP) — The North Platte River in southern Wyoming has been so low in places lately that a toddler could easily wade across and thick mats of olive-green algae grow in the lazy current. Just over two years ago, workers stacked sandbags to protect homes and fishing cabins...
WYOMING, PA・12 DAYS AGO
Hot 97-5

North Dakota's drought continues over much of the state. 75% of the state remains in an "Extreme Drought", the second highest level in the drought index. I know that doesn't sound particularly encouraging, however there is some improvement statewide, according the US Department of Agriculture's drought monitor map. The "Exceptional...
ENVIRONMENT・1 DAY AGO
Bismarck Tribune

Drought that has plagued North Dakota this summer might cut into the success of the fall pheasant hunting season in a state considered one of the nation's prime pheasant areas. Wildlife officials also are concerned about what the upcoming winter and spring might hold for the population of the popular...
ENVIRONMENT・2 DAYS AGO
Arkansas Online

After reaching a $7.48 high in mid-August, the July wheat futures market fell to below $7 recently, and the outlook for the commodity's profit margin is mixed at best, according to a recent news release. Scott Stiles, extension economist for the University of Arkansas System Division of Agriculture, said increases...
AGRICULTURE・4 DAYS AGO

Drought conditions improved slightly in central and southeastern North Dakota throughout the last week, though most of the state remains extremely dry. Rainfall helped downgrade exceptional and extreme drought, the worst categories, in some areas. But severe and extreme drought still cover 89% of the state, according to the latest U.S. Drought Monitor Map, released Sept. 2. A corner of Richland County in the southeast was classified abnormally dry, the mildest rating.
BISMARCK, ND・8 DAYS AGO
Editor at Global Perspectives

37,000 Afghan refugees will arrive in every U.S. state except four

Every U.S. state except Hawaii, South Dakota, West Virginia, Wyoming will accept Aghan refugees in the coming weeks. The Associated Press broke the story stating, "The Biden administration began notifying governors and state refugee coordinators on Wednesday how many refugees their state could expect to see in this first group."
WASHINGTON, DC・10 HOURS AGO
WashingtonExaminer

Leaders of China, India, and other major economies skip out on Biden's latest climate forum

A number of key world leaders were notably absent from President Joe Biden's Friday morning climate forum. Chinese President Xi Jinping and Indian Prime Minister Narendra Modi, representing the two countries the scientific community believes are the linchpins in effectively combating climate change, did not participate in the reconvening of the Major Economies Forum on Energy and Climate. Both leaders took part in the first forum, held by the White House in spring 2021.
U.S. POLITICS・1 DAY AGO
newschain

Christmas dinners ‘could be cancelled’ thanks to CO2 shortage

Christmas dinners could be “cancelled” due to the shortage of carbon dioxide gas (CO2), the owner of the UK’s biggest poultry supplier has said. A sharp rise in gas prices has meant two large fertiliser plants in Teesside and Cheshire – which produce CO2 as a by-product – have shut, cutting supply to the food industry.
BUSINESS・10 HOURS AGO